Rumors about anarchist plot (hatched by the heretofore unknown "National Liberation Militia") to attack police on Halloween don't appear to be very credible. 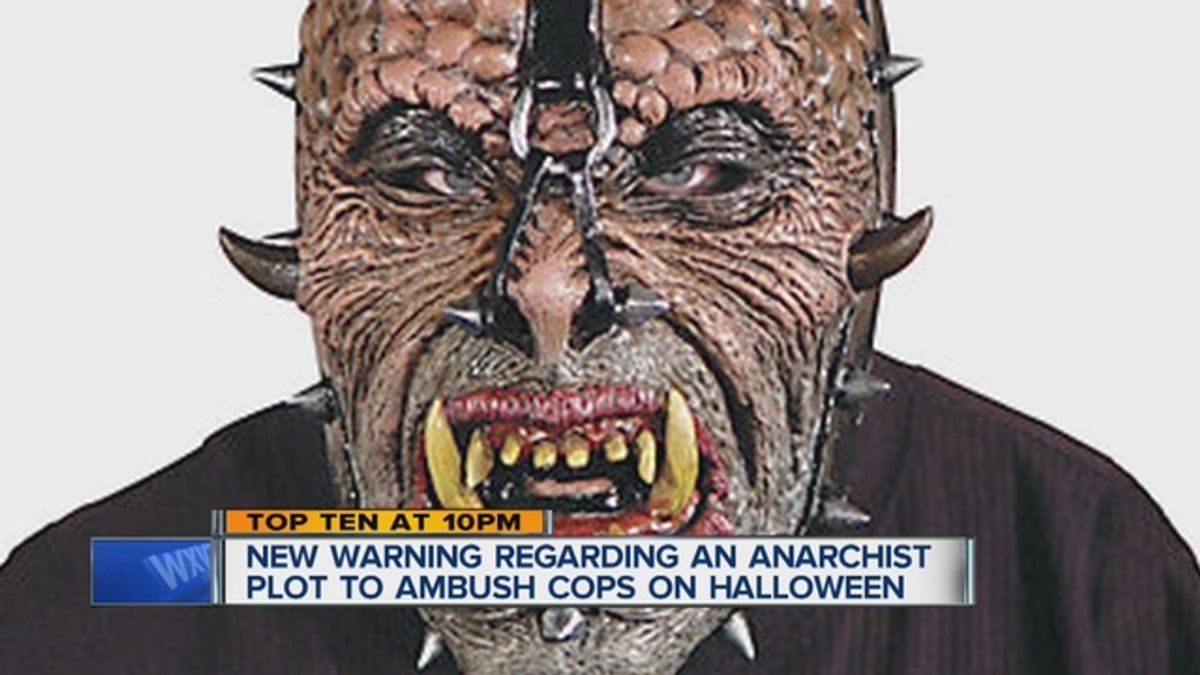 The FBI released an alert Monday warning the NYPD and police departments nationwide of a potentially dangerous anarchist group that says it plans to ambush cops on Halloween.

The extremist group — known as the National Liberation Militia — has proposed a "Halloween Revolt" that encourages supporters to cause a disturbance to attract police and then viciously attack them, the FBI said.

After that article was published, the claim was repeated on prominent news sites, including those of WCBS-TV (New York), WCMH-TV (Columbus), CBS News, and the Daily Mail, the last of which reported:

The FBI said the group has proposed a 'Halloween Revolt' that encourages its supporters to cause a disturbance to attract police, and then brutally attack them, the Post reported. Members are being encouraged to dress in costume with typical Halloween masks and use weapons like bottles, bricks and firearms to ambush police officers.

The article didn't specify by whom "members" were being encouraged to attack police, nor did it include useful information about how folks armed with the "warning" were meant to be vigilant. CBS News added a 27 October 2015 FBI statement to their reporting, which offered little in the way of clarity or substantiation:

In a statement, the FBI said: "As part of the continuous dialogue with our law enforcement partners, the FBI routinely shares information about potential threats to better enable law enforcement to protect the communities they serve. We urge the public to remain vigilant and report suspicious activity to law enforcement."

The article resonated with social media users, in part likely due to extant concern over a purported increase in violence against (and mistreatment of) police officers. (It also bears mentioning that Halloween urban legends are often passed along uncritically, even by law enforcement entities.)

Many curious readers pointed out that the name "National Liberation Militia" wasn't one they'd noticed before. That stands to reason, because a Google search restricted to just prior to publication of the Post's article revealed no mentions of such a group. (Due inconsistencies in date stamping, several related entries looked to be older but were merely repetitions of the same story incorrectly dated.)

That tweet (and a handful of others like it) linked to an open Google document which contained a lengthy writing surmising hacker groups were being targeted by feds in a false flag operation. That missive was vague, but it alleged law enforcement infiltration of the loose hacker collective known as Anonymous (and predicted the group would be a patsy for future attacks). Nowhere in the screed did anyone threaten or encourage violence; the message simply claimed federal operatives planned (for unstated reasons) to itself engage in attacks and blame the group:

There are two main groups NLM (National Liberation Militia) and 765 movement. The origins of these groups, and how they became groups run by feds are detailed below. They snuck in quietly, and started a very heavy recruiting process of anons. Their intention is to destroy us on every level we work on, and have the plans to do so. They have two plans known to us. One is their Halloween Mayhem Op. They are recruiting people that are more than happy to create violent chaos, and take to the streets Halloween night, with guns. The orders are to randomly shoot innocent people (if you think this sounds implausible, they have successfully done it before, details below), tear down atms and surveillance cameras, and actively riot against police ... ALL IN THE NAME OF ANONYMOUS. Our masks, our name. They say that the children of those that choose to carry this out, will be armed as well, and the innocent children on the streets are collateral damage, and that it is perfectly fine to use these children as human shields against gunfire of the police. Still reading? Good, it gets worse. Their second operation is planned for November 5th, that’s right, the Million Mask March. There are NLM ground troups in every city across the nation. Their plans are to storm every city hall that Anonymous will be marching in front of, and storm them, using Blac Block tactics ... If you take the word of the ex NLM officer contacts that we have, the purpose of this is to blame home grown terrorist attacks on Anonymous. The end game being inciting martial law and ruining Anonymous for good. No more Anonymous, no more problems. Nobody left to think, question, and push back against the system.

From that point, "National Liberation Militia" appeared in tweets about the New York Post article or reporting based on it. Whether the FBI actually issued any such advisory was unclear, and we found no evidence the agency had warned of any such attacks. When asked about the claim's credibility, the New York Post writer responded via Twitter:

@pentagonista The post is written from a release sent to the NYPD from the FBI. The information is presented as a potential. — Melkorka Licea (@MelkorkaLicea) October 27, 2015

@pentagonista yeah like it's a potential risk from this potential group etc.

@NewsRevo @NYCityAlerts The article is about the fact that the FBI released the alert and nothing more.

In short, multiple news outlets based vague warnings about an "anarchist plot" involving a "National Liberation Militia" on a single ambiguous claim published by the New York Post. No trace of any such group existed on the web a week earlier, and a modicum of searching revealed its only mentions appeared in relatively recent conspiracy chatter on social media. While the FBI released a generic statement about the "warning," the agency didn't confirm it actually sent any such alert. When pressed for detail, the original article's writer claimed the "information" was "presented as a potential."