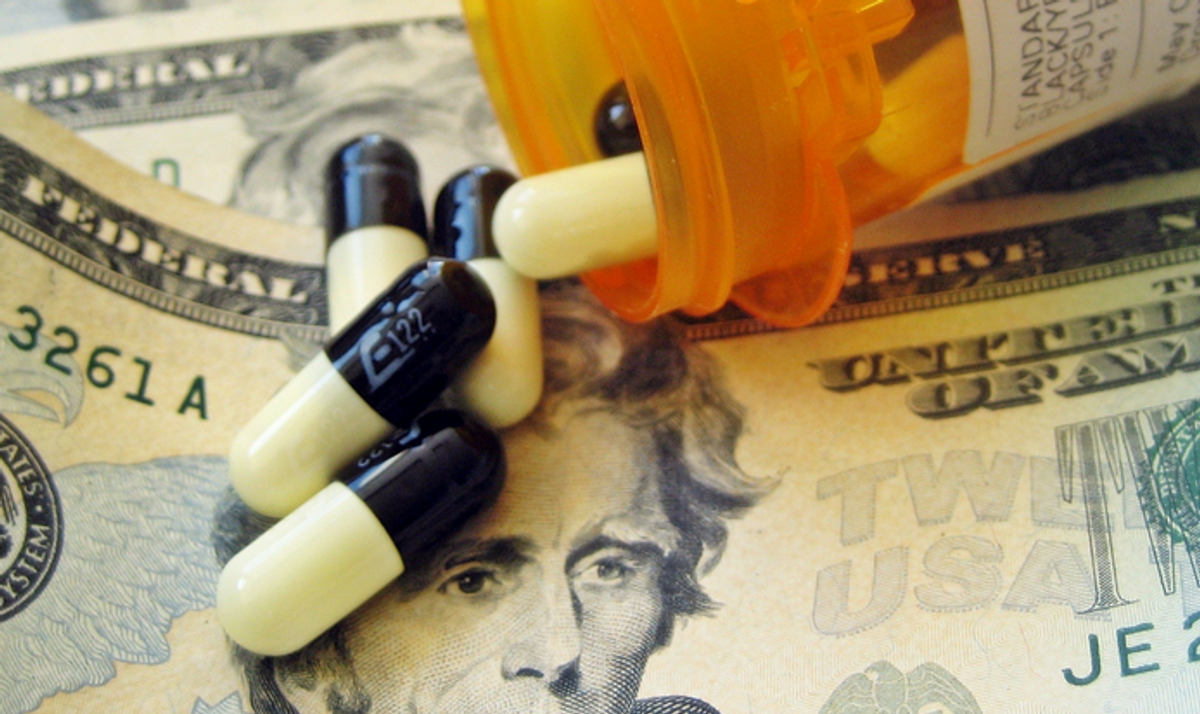 A drug known as Daraprim has been used to treat malaria and parasitic infections for more than six decades, but it made headlines on 21 September 2015 when a high-profile article in the New York Times reported that the drug's new corporate owner had raised its price from $13.50 per tablet to $750 per tablet overnight:

Specialists in infectious disease are protesting a gigantic overnight increase in the price of a 62-year-old drug that is the standard of care for treating a life-threatening parasitic infection.

The drug, called Daraprim, was acquired in August by Turing Pharmaceuticals, a start-up run by a former hedge fund manager. Turing immediately raised the price to $750 a tablet from $13.50, bringing the annual cost of treatment for some patients to hundreds of thousands of dollars.

Turing's price increase is not an isolated example. While most of the attention on pharmaceutical prices has been on new drugs for diseases such as cancer, hepatitis C and high cholesterol, growing concern has also focused on huge price increases for older drugs, some of them generic, that have long been mainstays of treatment for common medical conditions.

Portions of the article referenced what would later become misperceptions about the drug's applied use, specifically the notion that it was solely or primarily used for the treatment of HIV/AIDS or cancer patients:

Daraprim, known generically as pyrimethamine, is used mainly to treat toxoplasmosis, a parasite infection that can cause serious or even life-threatening problems for babies born to women who become infected during pregnancy, and also for people with compromised immune systems, like AIDS patients and certain cancer patients.

Outrage over the story snowballed, with condensed headlines circulating on popular blogs and web sites:

Ex-hedge funder buys rights to AIDS drug and raises price from $13.50 to $750 per pill https://t.co/M7xwWIZ4dM pic.twitter.com/xiYq13woHI

While the rumors quickly mainlined the story as being about a hedge fund manager who jacked up the price of an important AIDS or cancer drug by 5000 per cent overnight, the medication in question is more accurately described as an antimalarial medication commonly used to treat Toxoplasma gondii infections (often in HIV-positive patients).

Much of the social media outcry focused on Martin Shkreli, the hedge fund manager to whom the New York Times referred. Shkreli initially defended the price hike and denied that he was gouging patients:

Martin Shkreli, the founder and chief executive of Turing, said that the drug is so rarely used that the impact on the health system would be minuscule and that Turing would use the money it earns to develop better treatments for toxoplasmosis, with fewer side effects.

"This isn't the greedy drug company trying to gouge patients, it is us trying to stay in business," Mr. Shkreli said. He said that many patients use the drug for far less than a year and that the price was now more in line with those of other drugs for rare diseases.

"This is still one of the smallest pharmaceutical products in the world," he said. "It really doesn't make sense to get any criticism for this."

On 21 September 2015, Shkreli appeared on CNBC to further discuss the Daraprim controversy and claimed that the price increase was necessary for research and development into better treatments for toxoplasmosis (the illness caused by Toxoplasma gondii infections):

On the same day, he spoke with Bloomberg news. In that interview, he claimed that pharmaceutical companies had been "giving [Daraprim] away" despite its exceptionally low production costs (around or under a dollar per pill):

Shkreli's career was among topics dissected in the wake of the controversy, in the media and in heated threads on sites such as Reddit:

How the awful @MartinShkreli contrived to violate “both securities law and general good taste” in a single tweet: https://t.co/oGc549vTHg

The above-referenced Fusion profile on Shkreli asserted that his former company Retrophin "specialized in buying up the rights to little-known drugs and jacking up their prices." Moreover, the article claimed, Shkreli leveraged the impact of "scathing blog posts on financial blogs like SeekingAlpha ... in order to increase the value of his short positions":

Shkreli's behavior at Retrophin made him a lightning rod. He has been sued by multiple former Retrophin shareholders, who alleged he practiced insider trading to get rich off the company's shares. (One of those lawsuits was dismissed; others are ongoing or have been settled.) TheStreet named him the "Worst Biotech CEO of 2014," saying, "Someone thought a smart but attention-addled man-child with a Don Bailey obsession and a Twitter account could be a biotech CEO. They were wrong." And Retrophin eventually fired him from the company he'd founded, after accusing him of disguising legal settlements as "consulting fees."

Last month, Retrophin filed a lawsuit against Shkreli, asking for $65 million in damages. According to the lawsuit, Skhreli's former hedge fund, MSMB, was left "virtually bankrupt" after he made a single disastrous trade with Merrill Lynch in February 2011. Retrophin's board of directors allege that he used the drug company's funds to pay back angry MSMB investors who had lost money.

Shkreli's assertions about the necessity of a price hike on Daraprim were certainly interspersed with conflicting comments, on Bloomberg indicating he "need[ed] to turn a profit on the drug," and on Twitter claiming that the increase was for the sake of his "investors."

On 23 September 2015, Shkreli told NBC News that Turing Pharmaceuticals planned to "lower the price" of Daraprim in response to the controversy, but declined to say by how much:

He told NBC News that the decision to lower the price was a reaction to outrage over the increase in the price of the drug from $13.50 to $750 per pill.

"Yes it is absolutely a reaction — there were mistakes made with respect to helping people understand why we took this action, I think that it makes sense to lower the price in response to the anger that was felt by people," Shkreli said, 32.