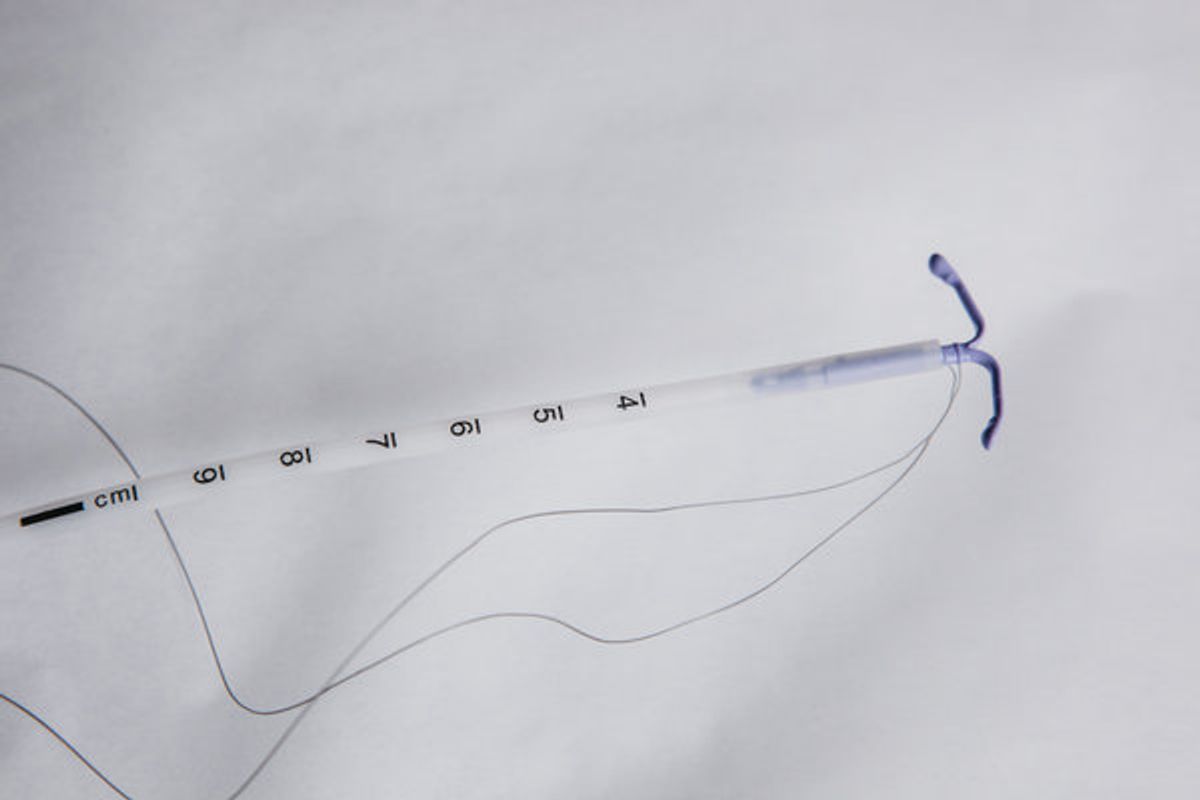 NEWS:   A June 2015 Facebook post reported a woman's claims of experiencing an adverse reaction to the Mirena IUD.

On 7 July 2015, a Facebook user published a status update reporting she had experienced a severe adverse reaction to Mirena (a brand of hormone-based IUD used for birth control and treatment of heavy menstrual bleeding).

The status update proved very popular, accumulating three quarters of a million shares in less than two days, while interest in the safety of IUDs in general (already elevated due to a recent widespread claim involving IUDs and Seattle schools) increased on social media sites and in Internet searches.

The private and protected nature of medical information makes such claims difficult to independently verify without the direct cooperation of the patient involved. However, we can note that some elements of this report are supported or contradicted by medical literature, Food and Drug Administration (FDA) documentation, and information we received from its Bayer (the parent company of Mirena) as well as a private gynecology practice.

The status update began with basic self-reported information about the user's experience: she obtained a Mirena IUD on 29 March 2015 (six weeks after giving birth), she "was pushed" into receiving it, she has an unspecified "blood disorder" (for Mirena might be recommended because the device can work to thin out the endometrium), and the device is indicated as being effective for five years. The update then continued by reporting:

After getting [the IUD] I had Viginal bleeding, hair loss, weight gain, headaches, severe stomach pain, and depression, and many more symptoms a office visit after lots of office calls my doctor & nurses said its all normal & to just try it for 90 days!

At this juncture, it's worthwhile to note that the some of the symptoms described by the woman (bleeding, mood lability, pelvic discomfort, headaches, and weight gain) are listed as possible side effects of Mirena. Although hair loss is not listed as a known side effect, it is associated with another medical circumstance cited by the woman: the postpartum period. The illusion of exceptional hair loss (attributed to a temporary cessation of daily hair loss during pregnancy) is a well-documented concern for postpartum women. Moreover, excessive and irregular bleeding, pelvic pain, and varying levels of depression frequently impact new mothers, including the many who don't opt to have a Mirena device inserted postpartum. Without much more additional information, determining which of the symptoms listed were due to the IUD, the general adjustment of the postpartum period, or other factors, is virtually impossible.

On June 23rd I went to have the mirena removed because I couldn't take the side effects any longer. The doctor wanted me to just take medicine to control the symptoms I denied as I thought if you had to be on medicine just to control your birth control issues something is wrong. We proceeded the exam to have it removed. The doctor could reach the strings to remove it but it wouldn't come. I went over for ultrasound to locate it which revealed that it was embedded in my endometrium.

One manner in which malplaced IUDs (or migrated IUDs) can affect a patient is embedment. However, if a patient is asymptomatic, removal is not always necessary, indicated, or even strictly recommended. A 2011 study involving IUDs in respect to radiology indicated that embedment of IUDs alone may be exceptionally common (and unnoticed in patients), indicating "[e]mbedment refers to IUD penetration into the endometrium or myometrium without extension through the serosa ... It may occur to some degree in up to 18% of females with an IUD."

The woman explained that an initial attempt to remove the embedded Mirena IUD from her was unsuccessful, concluding:

On Wednesday July 1st I went in for my 1st surgery to have it removed which was only suppose to take 30-60 minutes. After 3 hours I came out with the mirena still embedded in me. They went up in & went thru my belly button & stomach. The doctors couldn't get it bc I started bleeding heavily & they didn't have blood on stand by. On Thursday July 9th I will be meeting a new surgeon who will also try to pull it out if by any chance he fails at pulling it out I will be getting a hysterectomy.

At the age of 22 that is devastating to me. If you are thinking the mirena as your birth control I hope you rethink you decision as it destroyed my life. Thank you to each & everyone of you who took time to share, read, or just simply warning someone else about it. I know some people love it & have had no trouble, but remember you could always be just that one person like me. I don't wish this to happen to anyone. For everyone that send me a message please be patient I'm trying to get back to you but there is so many.

A representative from Bayer described known adverse outcomes for patients with Mirena to snopes.com and explained:

The risk of perforation (not embedment specifically) was found to be slightly higher in the postpartum period and among lactating women in a European study which involved more than 60,000 patients:

No substantial difference in uterine perforation risk was evident between LNG-IUSs and copper IUDs during routine clinical use. Breastfeeding and proximity to a recent delivery (up to 36 weeks) were both independently associated with an increased risk of uterine perforation. The presence of these two factors in combination was associated with an additive increase; however, even among women with both of these risk factors, perforation remains rare. From a public health perspective, the most important finding may be the rarity of perforation and the absence of serious sequelae if perforation occurred.

(That risk is also noted on Mirena's web site.)

As for the risk of infertility with Mirena, ectopic pregnancy and pelvic inflammatory disease (PID) are rare (but serious) side effects associated with potential loss of fertility that are listed by Bayer. Overall, IUDs do not lead to an aggregate increased risk of infertility:

The post referenced above may indeed be representative of a single patient's experience with the Mirena IUD. However, breastfeeding and the immediate postpartum period are also known to increase the risk of medical complications all on their own, perforation is very rare, and "scientific consensus is that IUD excels" on safety, efficacy, and (relative lack of) side effects.