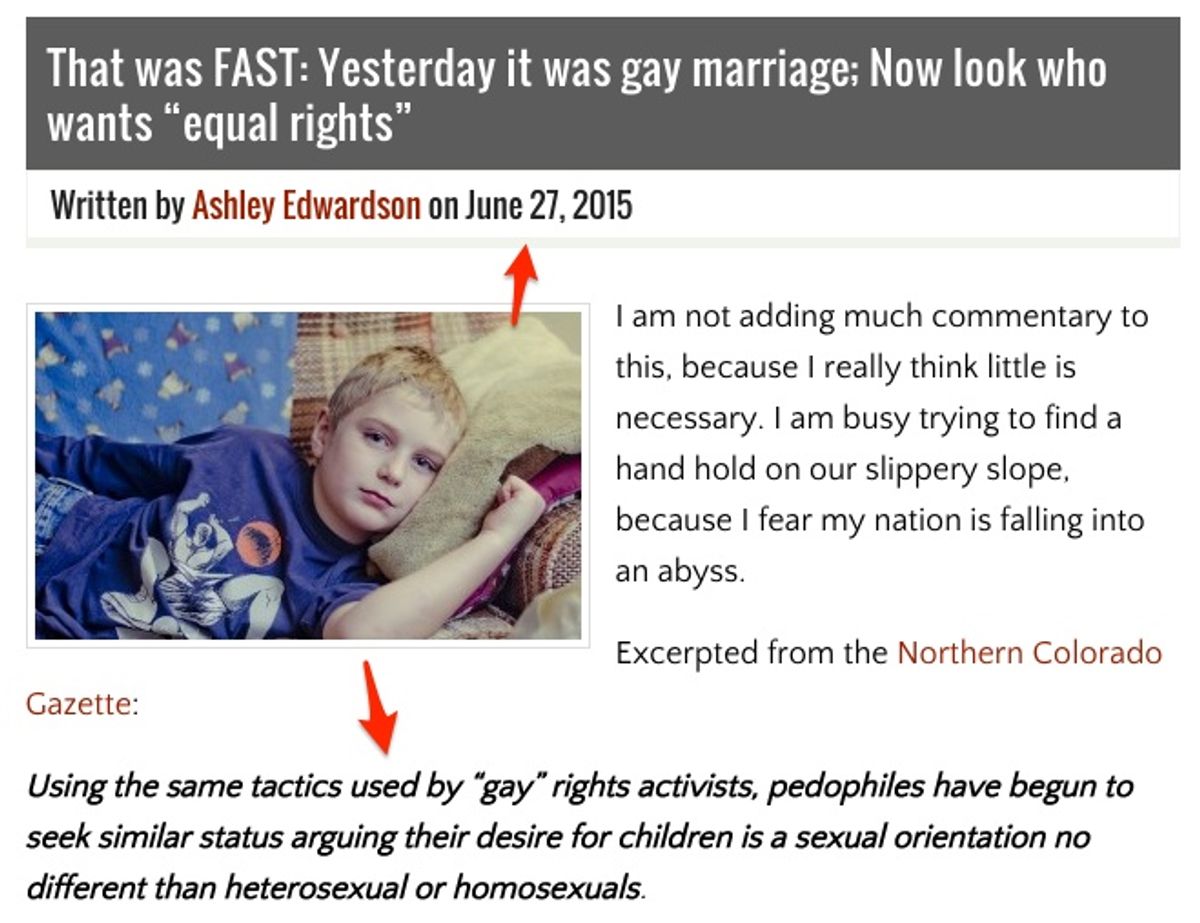 On 26 June 2015, the U.S. Supreme Court handed down a ruling that the Constitution guarantees a right to same-sex marriage, a decision met with a range of reactions on social media — including some predictions that "unintended consequences" could lead to regret for those supporting marriage equality.

One of the odder predictions in that category was an item posted on the web site of political commentator Allen B. West on 2015. The chronology of that item's publication, juxtaposed with its title ("That was FAST: Yesterday it was gay marriage; Now look who wants 'equal rights'") made the brief item's suggestion clear: the legalization of same-sex marriage would inevitably lead to legal rights protecting pedophiles.

I am not adding much commentary to this, because I really think little is necessary. I am busy trying to find a hand hold on our slippery slope, because I fear my nation is falling into an abyss.

After that, West's post quoted at length from an article published on a site alternately called the Greeley Gazette and the Northern Colorado Gazette. That article (credited to an author named "Jack Minor") and the reproduction of it on Allen West's site both contained this passage:

Using the same tactics used by “gay” rights activists, pedophiles have begun to seek similar status arguing their desire for children is a sexual orientation no different than heterosexual or homosexuals.

Critics of the homosexual lifestyle have long claimed that once it became acceptable to identify homosexuality as simply an “alternative lifestyle” or sexual orientation, logically nothing would be off limits. “Gay” advocates have taken offense at such a position insisting this would never happen. However, psychiatrists are now beginning to advocate redefining pedophilia in the same way homosexuality was redefined several years ago.

Links to the article from West's site and the excerpted passage soon began to circulate on social media, with some users lamenting the speed with which the marriage equality decision had led to a similar push for rights from pedophiles. But was this phenomenon really (as West's site's headline claimed) that "fast?"

The article to which West's writer referred was dated 2011, nearly four years before the Supreme Court handed down the Obergefell v. Hodges decision establishing same-sex marriage as a right in the United States. It's possible that Allen West's writer was unaware of the referenced article's date, but it was (at the very least) terribly misleading to reference a several-years-old article as proof of the rapid escalation of legalizing same-sex marriage to a push for legalizing sex with children.

The site was not alone in its leap to preposterous conclusions, as many of its commenters hastily assumed that overnight, marriage equality had led to a growing acceptance of the sexual abuse of children:

I have been predicting that this was where the LGBTQWERTY people would go next. I didn't expect it to be this quick, but I knew that would be next on their plate. You'll also see them pushing to mainstream incest in the future as well. No perversion is too vile for them to champion. And as for changing their orientation, well, pump three rounds of 5.56 through their torso, and that'll change them well enough for me.

I knew this was coming as soon as the gay marriage issue passed.

You gay rights activists wanted it, well you got it. The can of worms, is now officially open for business.

Several other political aggregation sites picked up the claim as well:

Although the article published on Allen West's site linking the legalization of same-sex marriage to pedophiles' "rights" caused a stir, it was lifted almost entirely from an article published in 2011 and in no way reflected a claim prompted by the Supreme Court decision regarding same-sex marriage. Moreover, that article originated with a writer who has been asserting for years (less than accurately) that the push for gay rights is manifestly setting the stage for legalized "pedophilia rights."

Given the prominent public and political resistance to marriages between consenting adults of the same sex during the many years in which the issue was debated, it's exceedingly unlikely a similar effort to legally enable sexual relationships with children (who cannot consent) would go unnoticed by the news media and the country at large. Although a few fringe groups may be advocating the relaxation of laws prohibiting sexual relationships between minors and adults, there is no mainstream acceptance of such groups; nor is there any indication that a meaningful level of support exists for them or has increased since same-sex unions gained legal acceptance.