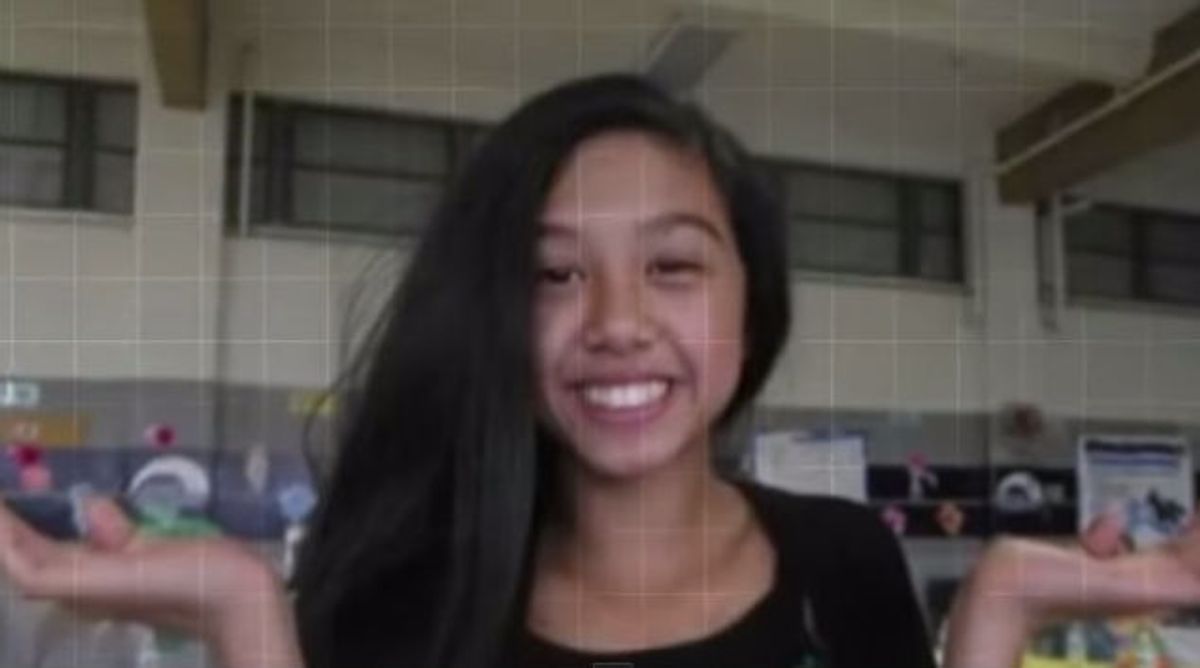 13-year-old Izabel Laxamana reportedly died of a suicide prompted by her father's online posting of a punishment video.

Updated information on this topic is available here.

On 30 May 2015 the web site Tacoma Stories published an article titled "Public Shaming Leads to a Young Girl’s Suicide" about the death of Washington State teen Izabel Laxamana.

The article reported that Laxamana, 13, appeared in a video (purportedly posted somewhere online shortly before her death) that was filmed by her father, showing the aftermath of a punitive haircut he had given her and shared by him on the Internet as a consequence of her "getting messed up":

A few days ago a 15 second video showed up online. It showed a young girl who appeared to be twelve or thirteen years old. She’s standing in a room looking at the phone camera. She appears to be afraid. The camera then shows the floor where there is a pile of long black hair. A taunting male voice says, “The consequences of getting messed up? Man, you lost all that beautiful hair. Was it worth it?” The girl stares at her hair on the floor. She very quietly says, “No.” “How many times did I warn you?” She almost inaudibly says, “Twice.” He then says, “Okay.” as if he has proved a point. The video ends.

Originally the article stated that the (unidentified) girl was injured gravely after jumping off of an overpass in Tacoma, and that she was transported to a local hospital for treatment. On 31 May 2015, the article's author updated it to say that the girl had succumbed to her injuries:

Update 05/31/15: I have heard from multiple sources that the young woman passed away at Harborview Medical Center this evening. My thoughts are with the family and friends of this young girl. I am sorry for your loss.

On 1 June 2015, Tacoma's News Tribune published an article titled "Tacoma Middle School Girl Dies After Plunge Off Freeway Overpass." The site confirmed that a student of Giaudrone Middle School in Tacoma had died on 30 May 2015 following a jump or fall from an overpass and that the death had been ruled a suicide, but the student in question was still not identified by name:

Tacoma police reported that someone jumped or fell from the South 48th Street bridge over Interstate 5, and school officials confirmed that the victim was a Giaudrone student. She was taken to a Seattle hospital, where she died. The King County Medical Examiners’ office ruled the death a suicide.

Tacoma Public Schools spokesman Dan Voelpel told the news outlet that the family of the teen requested privacy, a message that was passed on to students in the district. By 4 June 2015 the story had begun to circulate online, with some social media users likening Laxamana's death to the suicide of Leelah Alcorn:

The shocking tale of a 13-year-old girl committing suicide in Tacoma Washington has shaken the web. Just days after her father posted a public shaming video of the girl online, Isabel Laxamana jumped off a highway overpass on Friday, May 29. The nearness of Laxamana’s self inflicted death and the public shaming video posted by her parent has lead many to believe the two events may have been related and some are even calling for Laxamana’s father to be criminally prosecuted for the tragic events his public shaming video may have caused.

The "punishment" video that Laxamana’s father allegedly uploaded to YouTube has since been taken down, but it by one of Laxamana’s friends who had recorded a playback of it on his phone:

A 13 August 2014 Google+ post attributed to the teen described her as feeling isolated and despondent:

I feel hated most of the time im in school i feel looked down on and i get judged alot.... But what keeps me going is people like kian who have gone through the same thing as me... In a school with so many people its weird to say "i feel alone" but the truth is that you really do feel alone. So thanks for everything kian....

On 30 May 2015, a GoFundMe page was created to support the Laxamana family, but it wasn't clear by whom the campaign had been started. The web site Justice for Izabel was also created (by parties unknown) and published to the web on 1 June 2015, with a stated purpose of "raising awareness of the impact of the practice of public shaming."

As news of Laxamana's death circulated, unsubstantiated claims made in the comments of the Tacoma Stories post gained traction, among them were anonymous comments claiming Laxamana had been publicly shamed at school after her hair was cut. One commenter (who identified him or herself only as "Jenny") wrote:

There’s more to this story. I talked to her teacher. She was shamed in front of her peers by the principal and forced to withdraw her running for ASB Student Body President. She begged him to stop and he said wait in the hallway… She was getting bullied by family, peers, and adminidtrator at school. No wonder she saw no way out. Poor baby… My daughter was hiding and crying one day because of bullying and this precious girl comforted her...

She was also publicly shamed at school that same day. She was made to go to school with a horrible haircut and had gotten pulled out of class by the principal for taking an inappropriate picture (I can only assume this was what the punishment was about). The other student who’s phone was used was also pulled out and this child begged the principal “please don’t do this here”. He told her to wait in the hallway and continued. All said and done this very popular girl was forced to withdraw in running for student body president, etc. One of her friends told me she was also facing bullying. My question is why didn’t any teacher or principal notice her hack job haircut and stop and think about what was going on? The dad messed up but he is not the only factor here. The schools issues need to be addressed.

Officially, Izabel Laxamana has not been publicly identified in news reports as the victim of the suicide incident in Tacoma, and while she resembles the young woman seen in the video above, the circumstances under which the "punishment" video clip surfaced (and the precise date on which it was published) have not yet been confirmed.