There's been a concerted effort by Russian propagandists to depict Ukrainian's president as a Nazi. 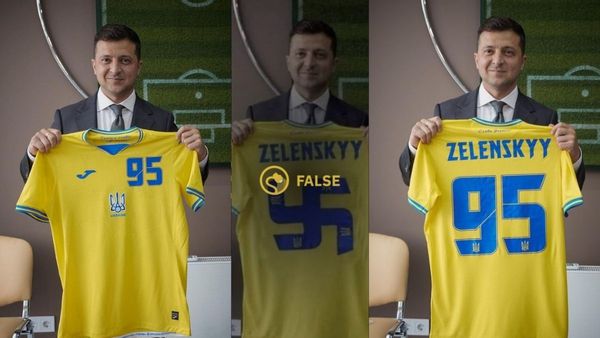 This is not a genuine photograph of Zelenskyy but another piece of propaganda that tries to depict Zelenskyy, who is Jewish, as a Nazi in order to justify Russia's invasion of the country.

A few days after Russian President Vladimir Putin launched an attack on Ukraine at the end of February 2022, he attempted to justify this action (which he dubbed a "special operation" instead of an attack or an invasion) by saying that the goal of Russia's invasion was "to demilitarize and denazify Ukraine."

A group of historians and scholars of Nazism, World War II, and genocide published a letter in Jewish Journal that labeled Putin's claim that Ukraine was run by Nazis as "factually wrong" and "morally repugnant."

The Russian attack came in the wake of accusations by the Russian president Vladimir Putin of crimes against humanity and genocide, allegedly committed by the Ukrainian government in the Donbas. Russian propaganda regularly presents the elected leaders of Ukraine as Nazis and fascists oppressing the local ethnic Russian population, which it claims needs to be liberated. President Putin stated that one of the goals of his “special military operation” against Ukraine is the “denazification” of the country ...