Roloff and the rest of his family star in the long-running TLC reality TV show, "Little People, Big World." 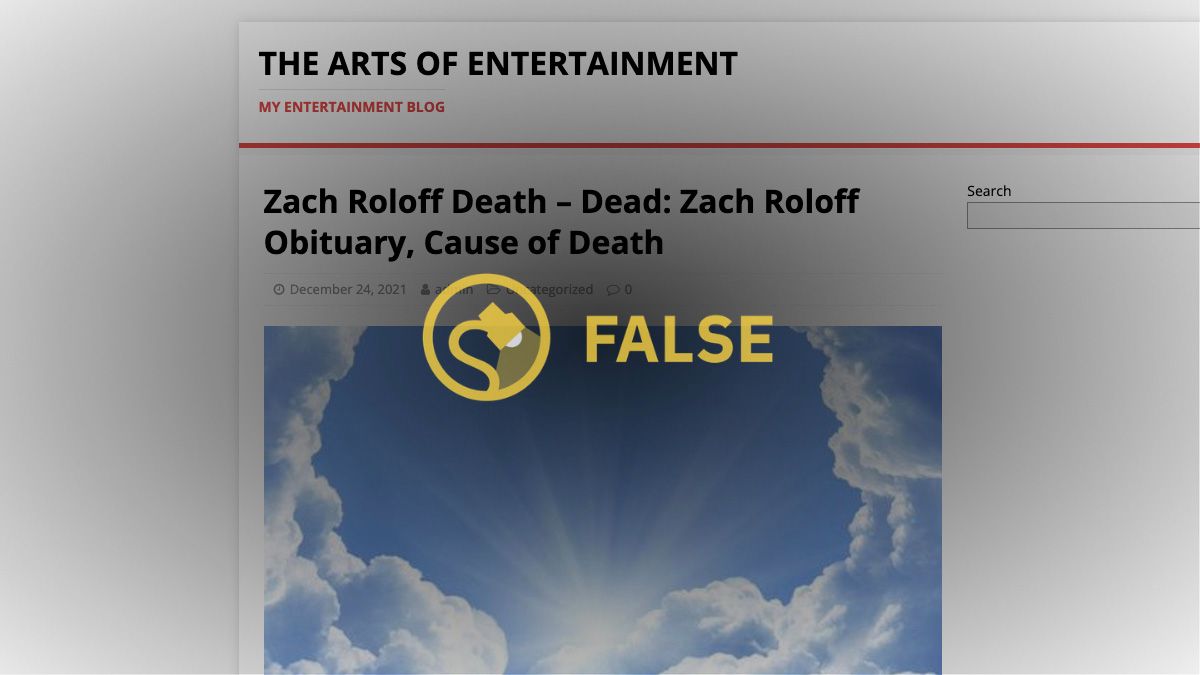 In late December 2021, a death hoax was shared online for Zach Roloff that claimed he had died by suicide. Roloff is one of the stars of the TLC reality TV show, "Little People, Big World," often referred to as "LPBW." The claim was misleading and false. As of early January 2022, there was no evidence that he had died.

The same people who created the hoax may have done so in order to profit from stories that debunked it.

It all began on Dec. 24, 2021, when the obscure and unreliable website theartsofentertainment.com published a misleading headline. However, this initial story didn't yet mention that he committed suicide: "Zach Roloff Death – Dead: Zach Roloff Obituary, Cause of Death."

Zach Roloff Death | Obituary | Dead | Died | Funeral Plans – It is with great sadness to announce the passing of Zach Roloff. We are made to know about this on December 24, 2021.

We mourn with the family of Zach Roloff for this great loss. Please received our heartfelt condolences. Kindly leave a tributes and your condolence messages below to honor the passing of our beloved person.

Zach Roloff cause of death has not been made public. We pray that God grants those mourning this death the strength and the courage to carry on. Losing a beloved one is one of the most difficult feelings on earth. Our thoughts and prayers are with everyone going through a difficult time due to this.

Friends, Family and loved ones are extremely sad and currently grieving as the news of Zach Roloff death was made known to the public.

Though our words can do little, we hope our thoughts and prayers will encourage you this period and always as you mourn, the passing soul.

The death hoax story from theartsofentertainment.com was then amplified by a number of websites, some of which falsely claimed that Roloff committed suicide. Several of the domain names for the websites were also registered in India.

However, the body of the story said that Roloff "passed away tragically" and mentioned little of Roloff's purported death being a "hoax," which it was. The end of the highly misleading article read as follows:

A report confirms that he was passed away because of committing suicide. The death news reportedly appeared on December 24, 2021. People went in mourn after knowing that Zach is no more among us. All the fans mourned this Christmas and many fans did not celebrate the special occasion of Christmas.

The funeral information is yet to be available but most probably it was taking place. The funeral definitely took place in the presence of his friends, family and colleagues. There are many people who are truly attached to Zach. For further information, you can bookmark the website in your browser and get all the information briefly. There is a huge possibility that you will get answers to all your queries.

Again, Roloff did not commit suicide, as it was all nothing more than a death hoax. There have been no reports from legitimate sources that Roloff died. We previously reported about a misleading Facebook ad that also featured Zach Roloff and the rest of his family.