"We’ll disrupt key economic institutions with a wide range of non-violent tactics," the group said of their "Money Rebellion" initiative. 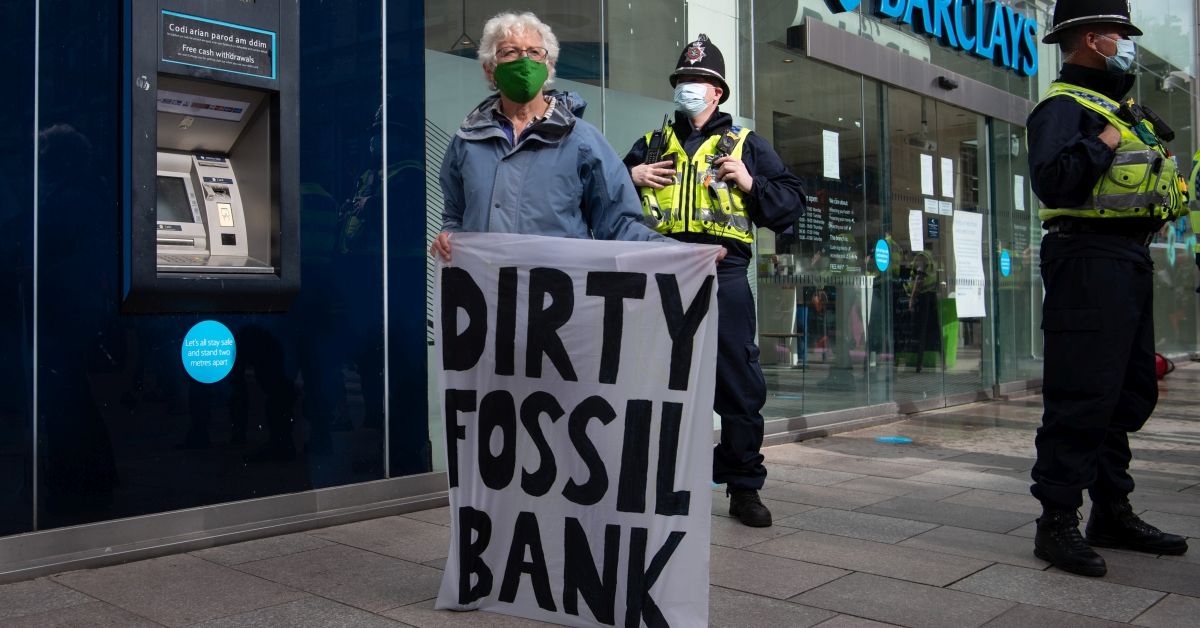 Claim:
Activists with the climate group Extinction Rebellion have broken windows of banks in London as part of protest against financial institutions that support the fossil fuel industry.
Rating:

In April 2021, the climate activism group Extinction Rebellion staged multiple protests as part of their "Money Rebellion" initiative. That effort, according to the group, seeks to push back against "economic rules and financial institutions that are killing us." On April 6 and on April 20, activists who identified themselves as part of the Extinction Rebellion group targeted two London banks: Barclays and HSBC bank, breaking the buildings' windows in both cases.

On April 6, Reuters reported on a window-breaking protest at the London headquarters of the bank Barclays:

Police arrested seven people outside the London headquarters of Barclays on Wednesday after climate change activists broke windows to protest the role of the financial sector in climate change.

The activists from the Extinction Rebellion group used hammers to break the windows and then pasted the message “In Case of Climate Emergency Break Glass” on the front of the bank’s building.

The group said the action was part of its “Money Rebellion” against the capitalist system which used “nonviolent direct action, causing damage to property to prevent and draw attention to greater damage”.

On April 22, the BBC reported on an Earth Day window-breaking protest at HSBC's headquarters in east London:

Extinction Rebellion (XR) activists have shattered at least 19 windows at HSBC's headquarters in east London. The Earth Day protest at the Canary Wharf branch was staged to draw attention to the bank's links to the fossil fuel industry, activists said.

Nine women took part in the protest, wearing patches with the words "better broken windows than broken promises". After breaking the glass using hammers and chisels, the women sat down and waited to be arrested by police.

In a slideshow that describes various elements of the Money Rebellion playbook, Extinction Rebellion asserted that "Barclays and HSBC are by far the biggest UK financiers of fossil fuels."

In response, Barclays released a statement that said "Extinction Rebellion are entitled to their view on capitalism and climate change, but we would ask that in expressing that view they stop short of behaviour which involves criminal damage to our facilities and puts people’s safety at risk.” A spokesperson added that "We have made a commitment to align our entire financing portfolio to the goals of the Paris Agreement, with specific targets and transparent reporting, on the way to achieving our ambition to be a net zero bank by 2050, and help accelerate the transition to a low-carbon economy.”

HSBC responded similarly. "We welcome meaningful dialogue on our climate strategy," the bank said, "however we cannot condone vandalism or actions that put people and property at risk." They also asserted to have plans to transition to a low carbon economy. "We have an ambition to be net-zero by 2030 and to bring our financed emissions to net-zero by 2050."

Because Extinction Rebellion has explicitly taken credit for these actions, the claim that the climate group is breaking bank windows is true.