Here are the facts and myths behind the viral photograph. 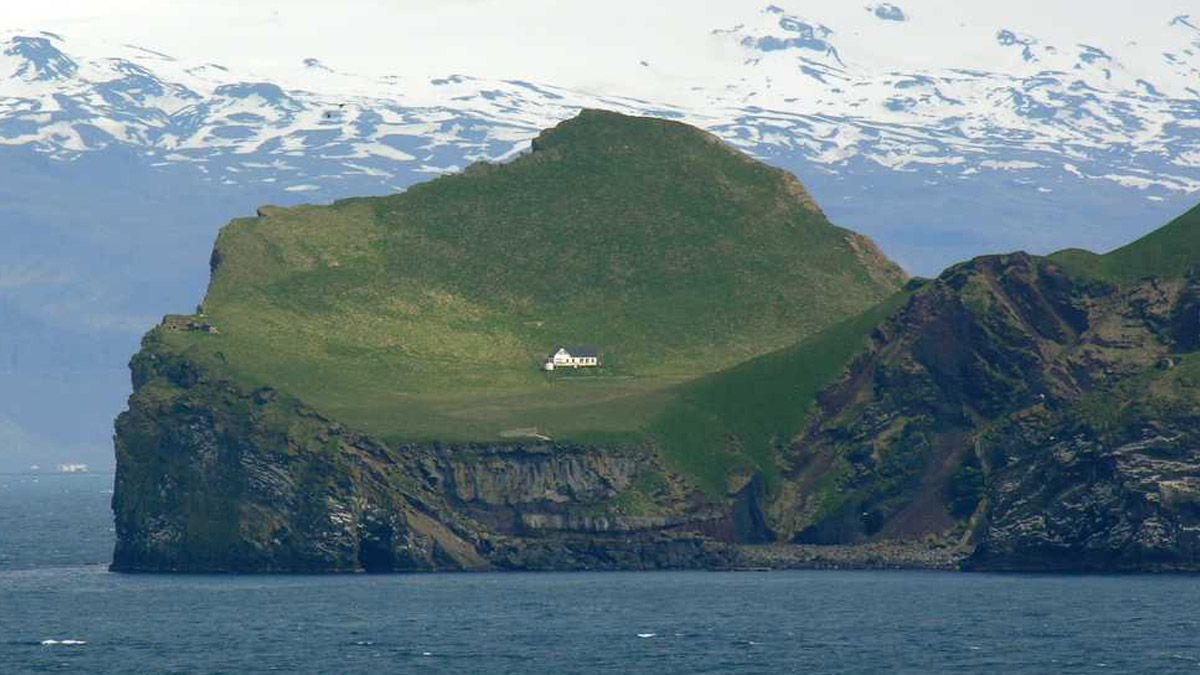 At Snopes we debunked the myths behind Elliðaey in Iceland also known as the so-called world's loneliest house. (Image Via Hansueli Krapf/Wikimedia Commons)

Claim:
A small Icelandic island has a house with a dark truth about why it's empty, and Björk once lived there.
Rating:

It's not true that the "world's loneliest house" had a "dark truth" about why it was "empty," nor was it true that the singer known as Björk once lived there. While the claims are false, we took this opportunity to research and document the other facts and myths about Elliðaey, a real island off the southern coast of Iceland.

What is inside the "world's loneliest house"? An online advertisement with a fascinating photograph promised quite the reveal: "World's Loneliest House Was Built For One Dark Purpose." The resulting story even claimed that there was a "dark truth" as to why the house was "empty." We looked into the subject to find the facts and debunk the myths behind Elliðaey (Ellidaey), an isolated island off the southern coast of Iceland. It's located in the Westman Islands, also known as Vestmannaeyjar.

It read: "You have to live here for 1 year, you'll have unlimited food but can bring 1 thing. What is it?"

In regard to the ad, we noted that the photograph is real and was not doctored. It's also true that the building in the picture is the only dwelling on the island of Elliðaey. An older and much smaller building still exists on the island, but it's now only used for storage. This picture has not been manipulated. (Courtesy: Hansueli Krapf/Wikimedia Commons)

Nearby is a larger island known as Heimaey. Heimaey is the only island that's populated in the area. It is home to about 4,000 people.

As for the name "world's loneliest house," it isn't a house at all. In fact, it is a lodge with plenty of beds.

We found various news stories that made misleading claims about the building. One headline read: "Find out who lives in the only house on this remote island." Another said: "Mystery of world's loneliest house on remote island that has been empty for over 100 years." A third claimed: "The Lonely House on Ellidaey Island, Where Nobody is Sure of its Residents."

In reality, no one person lives in the lodge, it hasn't been "empty for over 100 years," and it's false to say "nobody is sure of its residents."

According to various accounts that we found online, the Elliðaey Hunting Association constructed the lodge on the island in 1953. We also found information about how the hunters who stay at the lodge purportedly hunt puffins.

Newspapers archives from 1973 provided more details. During that year, the Arizona Republic reported that puffins, gannets, petrels, and razorbills were among the many birds that populated the Westman Islands (Vestmannaeyjar). Ellidaey was described as a "rocky islet" with Iceland's largest gannet colony with an estimated 15,000 birds.

We have yet to find credible information that hunters use the building in the present-day to hunt puffins. None of the pictures uploaded to Google Maps showed any signs of hunting on the island. It's possible that the lodge was used by hunters in past decades, but now simply serves one purpose: touristry.

We reached out to local officials to learn more about this rumor and plan on updating this story in the future with more definitive information.

Little is known for sure about Elliðaey's past or the "world's loneliest house." We found several online articles that told of five families that inhabited the island in the 18th century. While it's possible that this is true, none of the articles we found provided any sources to confirm this information. It appeared that they had simply copied and pasted the same details from other articles without properly looking into the matter.

To learn more, we turned to the "Iceland Adventure Guide," a 528-page book authored in 2008 by Don and Marjorie Young. It also told of a history dating back hundreds of years:

Although there were fishing camps scattered throughout the island in the past, by 1702 only one remained and three farms had been created, housing 17 people. Some 258 sheep and sometimes even cattle grazed there.

Between 1914 and 1929, Olafur Jonsson and his family became the islands' first fox-breeders. By 1960, Elliðaey (Ellidaey) was totally abandoned. A lighthouse was built on the island in 1951. A hunter's hut that is quite popular during the hunting season is here as well.

The mention of a lighthouse caught our attention. There's no sign of a lighthouse on Elliðaey in the Westman Islands (Vestmannaeyjar). It may have been mixed up with another island also named Elliðaey, which leads us to Björk.

For years, the musician known as Björk has been rumored to have lived in the "world's loneliest house" on Elliðaey. In fact, a Google search for "Bjork's island" shows image results for the same island.

This rumor has been around since at least the year 2000.

However, this was never true. The confusion stemmed from news stories in February 2000 that described a second Icelandic island also named Elliðaey (Ellidaey).

At the time, The Miami Herald and other newspapers reported that Björk was "granted the exclusive use of an uninhabited island in western Iceland because she has done so much for the country." Prime Minister David Oddsson announced the news "amid rumors that the superstar [wanted] to buy Ellidaey island outright."

According to Irish Examiner, the singer turned down the offer of the island in 2004 because she didn't want her home to become a tourist attraction.

The Elliðaey connected to Björk was not the same island shown in the photograph of the "world's loneliest house." Rather, this Elliðaey is located in Breiðafjörður, which is located west of Iceland. The lighthouse seen here may have been the same one mentioned in the book by the Youngs, even though this would have been a different Elliðaey. It's also possible that the Elliðaey in the Westman Islands (Vestmannaeyjar) once had a lighthouse in the past, but no longer does.

There also appeared to be two islands where visitors had tagged the "world's loneliest house" on Google Maps. One person incorrectly placed it on the island of Suðurey. Top-right is Elliðaey, the correct island that appeared in the viral picture. In the middle is the large and populated island known as Heimaey. At the bottom, it reads "World's Loneliest House." However, this is the incorrectly tagged island known as Suðurey.

In reality, Suðurey is located south of Heimaey, while Elliðaey, the correct island with the lodge, is north of it.

The ad that led us to research the photograph of Elliðaey took us to a 40-page slideshow article with the headline: "The Mystery Of The 'World’s Loneliest House' – And The Dark Truth About Why It’s Empty."

However, in no part of the lengthy story did it mention anything about a "dark truth" about why the building is supposedly empty. To give an idea of what exactly was printed within the many paragraphs of the misleading article, one page mentioned that perhaps a billionaire built the "house" on the island to escape zombies.

This is obviously false, not just because of the mention of zombies, but because we found no news articles about a transfer of the lodge's ownership to a billionaire or anyone else.

In 2017, Bjarni Sigurdsson's YouTube channel posted a video that documented an entire trip to Elliðaey, even showing part of the rocky ascent from a boat to the island:

According to the video, as of 2017, the lodge featured two floors, beds, couches, framed photographs, tables, and chairs. Also seen in the video were a stove, grill, refrigerator, radio, candles, and binoculars.

The lodge's power source is unknown. Some online articles claimed that no electricity is available on the island. However, that appeared that changed at some point in time. Electrical cords were spotted on the ground at the 9:35 point in the above video. It's likely powered with propane gas. For example, a yellow propane tank was visible at the 12:41 mark in the video, perhaps meaning there was another tank nearby. A water reservoir is also visible, likely from collecting rainwater.

On Sept. 1, 2021, a YouTuber named Ryan Trahan posted a video after spending a night in the lodge. At the 7:12 mark in the video, it showed that, at the time, the older and much smaller building on the island was only used for the storage of various goods such as rope, old furniture, and what appeared to be drinking water.

In sum, there are two islands off the coast of Iceland named Elliðaey (Ellidaey). The "world's loneliest house," which is actually a lodge, is the one seen in the viral photograph. It's located on the island named Elliðaey south of Iceland in the Westman Islands (Vestmannaeyjar). There is no "dark truth" to its history and it's not always "empty." Further, despite rumors, Björk never lived on the island. In 2000, she was gifted ownership of the other island of the same name in Breiðafjörður, which is located west of Iceland. She eventually turned down the offer out of a fear that it would become a tourist attraction.