A picture of two children posing with a balloon in front of Oregon's massive Forestry Building is real, but the caption it's often shared with is a bit off. 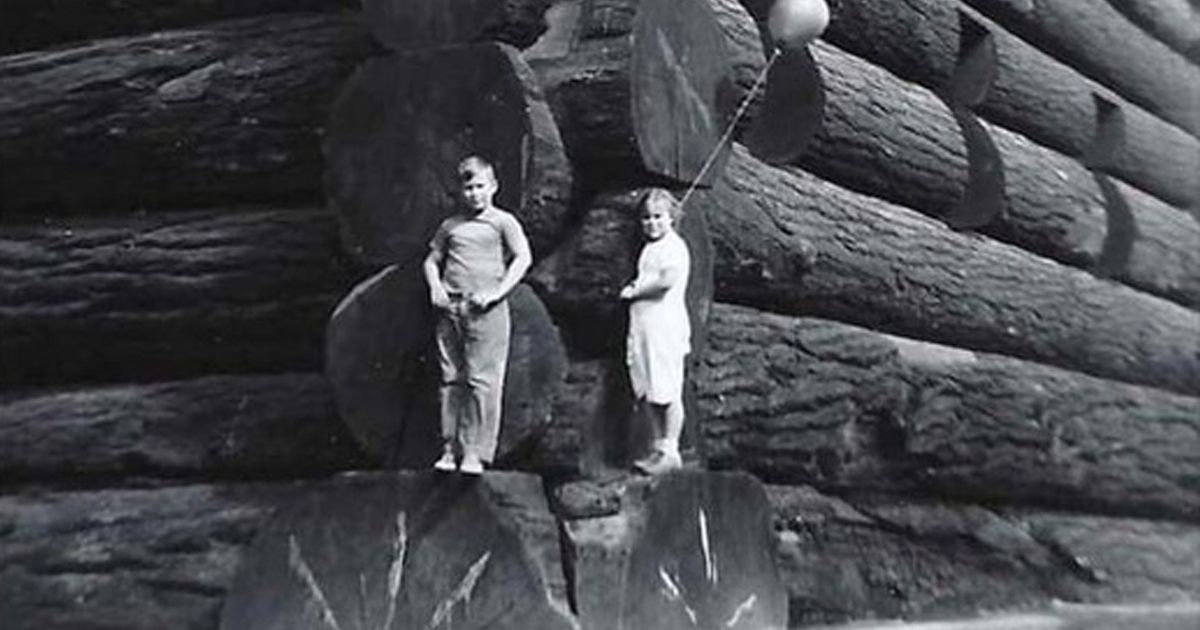 Claim:
A picture shows two children with a balloon as they pose in front of the world's largest log cabin.
Rating:

In September 2021, a picture was posted to Reddit of two children standing with a balloon in front of what was purported to be the "world's largest log cabin." It showed the Forestry Building, a massive structure that was part of the Lewis and Clark Centennial Exposition in 1905 in Portland, Oregon. We found no evidence that the photograph had been faked. However, we did discover that the Forestry Building, which burned down in 1964, was not considered to be the "world's largest log cabin," but rather the second-largest log structure when it was built.

In this story, we'll examine the Forestry Building's history, learn about its original exhibits, provide evidence of its being considered the second-largest log structure, and reveal what is considered to be the world's largest log "cabin" building.

On June 23, 1905, The Evening Statesman newspaper out of Walla Walla, Washington, described the Forestry Building as "a big log cabin." The paper printed its dimensions and explained why the people of the time chose to construct it for the exposition:

Such Is the Forestry Building at the Lewis and Clark Centennial.

When those intrepid pathfinders, Captains Meriwether Lewis and William Clark, made their famous expedition of exploration into the northwest 100 years ago they were glad to enjoy the luxury of a log cabin's shelter. The log cabin is a type of the architecture of the early settlements in the northwest, and for this reason, the Forestry Building at the Lewis and Clark Exposition in Portland, Ore., is constructed of logs. Two miles of logs five and six feet in diameter and fifty-two feet long were required for the building, together with eight miles of poles and tons of stakes and shingles. It is 206 feet (63 meters) long and 102 feet (31 meters) wide. Inside the Forestry Building, 1905. (Courtesy: The Press, Muncie, Indiana)

When it opened, the Forestry Building put on display exhibits meant to depict "the progress of the saw-mill industry of the Pacific Northwest." Forestry Building in Portland, Oregon, 1905. (Photo by Library of Congress/Corbis/VCG via Getty Images)

Exhibits at the Exposition

The Scranton Republican provided more details on what visitors found inside the Forestry Building during the 1905 exposition. This included quite a few miniature exhibits:

Visitors from the east and middle west may study the methods of logging in the big forests of Washington and Oregon in an interesting working exhibit at the Lewis and Clark Exposition. The exhibit occupies a large space in one corner of the Forestry Building, an immense log palace made of forest giants which is in itself an exhibit of the forest wealth of the Pacific Northwest.

A miniature forest which is an exact reproduction on a small scale of the mighty forests which cover a large part of the Oregon country, forms the groundwork for the display, which has been installed by the Lidgerwood Manufacturing company of New York City. There are real fir trees, no bigger than rose bushes, in the forest and the trees are growing in real earth, while a river of real water flows down the hillside.

The exhibit is intended to show how the logs are brought to mill and every step from stump to mill is shown. In one corner of the space a miniature skidding and loading engine, operated by electricity, has been installed. This engine operates a skidder, by means of which the logs are lifted from the ground and loaded on to cars. A geared locomotive also run by electricity, draws the train which takes cars to the mill.

Another interesting feature of logging operations is shown by a miniature log handling cableway. The logs are taken from the cars, transported across a river and unloaded into a log pond at the mill. The same device may be used for transporting logs from one part of a mill yard to another. The cableway device consists of two towers, connected by a strong cable, which spans the space over which the logs are to be transported. The whole apparatus is shown in miniature, one-twelfth the actual size, and a cross section of a river bed with water, is included in the exhibit.

A third model in this interesting logging display is of a machine for loading logs on trains. This machine picks up the logs from beside the track, and lays them on flat cars as easily as if they were tooth picks. The method of swinging a derrick by means of swinging gear is illustrated by another machine, which is built one-twelfth the regular size. Forestry Building in Portland, Oregon, 1905. (Photo by Library of Congress/Corbis/VCG via Getty Images)

As for the evidence that it was considered to be the "second-largest" log structure at the time, the following "Centennial Notes" column was printed in multiple newspapers in December 1904, including The St. Helena Star in St. Helena, California:

A comprehensive Philippine display will be an interesting feature of the Lewis and Clark Centennial.

A Forestry Building at the Lewis and Clark Centennial will be the second-largest log building ever erected.

Several large rose beds have been laid out in the Lewis and Clark Centennial grounds and the roses are now in full bloom.

An interesting collection of old mining implements will form a part of Oregon's exhibit at the Lewis and Clark Centennial.

One of the logs used in the construction of the Forestry Building at the Lewis and Clark Exposition weighed twenty-seven tons.

Another report claimed that the largest log weighed 32 tons, not 27, so the large log's actual weight is unclear.

On April 6, 1905, the Davenport Democrat and Leader also printed that the Forestry Building, dubbed a "log palace," would be "the second-largest of logs ever built." It said that one of the logs measured "52 feet long (16 meters) and six feet in diameter (1.8 meters)," meaning that if it "were cut into standard size flooring boards one inch (2.5 centimeters) thick and three inches (7.6 centimeters) wide," it would stretch for around 13 miles (21 kilometers). Another report said that the log was eight feet (2.4 meters) in diameter.

If the Forestry Building was the second-largest log structure in 1905, then what was the "world's largest log cabin"? We didn't find much help in the newspaper archives from 1905 that described the Forestry Building. However, a further search of early reporting brought up one name: Old Faithful Inn. This might have been the answer. On Sept. 1, 1904, The Madisonian newspaper out of Virginia City, Montana, printed that Yellowstone National Park's Old Faithful Inn was "the largest log building in the world." It was constructed during 1903 and 1904. Also, while the Forestry Building was made of logs, poles, stakes, and shingles, the Old Faithful Inn was constructed with logs and stone. The Yellowstone National Park Lodges website said that the Old Faithful Inn is still "considered the largest log structure in the world," complete with a "massive stone fireplace and a hand-crafted clock made of copper, wood, and wrought iron serving as focal points."

In sum, as of 2022, all evidence pointed to the "world's largest log cabin" structure being the Old Faithful Inn in Wyoming, not the Forestry Building in Oregon. The same was true in 1905 when the latter was erected, as the former was already in operation at the time. It's possible that the Forestry Building may have contained the largest individual log or more overall wood. However, at the time, according to newspaper archives, it was not considered the world's largest log "cabin" structure.