'Woman Leaves House to Neighbor' Ad Is Not a True Story

We clicked through 50 pages of fiction so our readers don't have to. 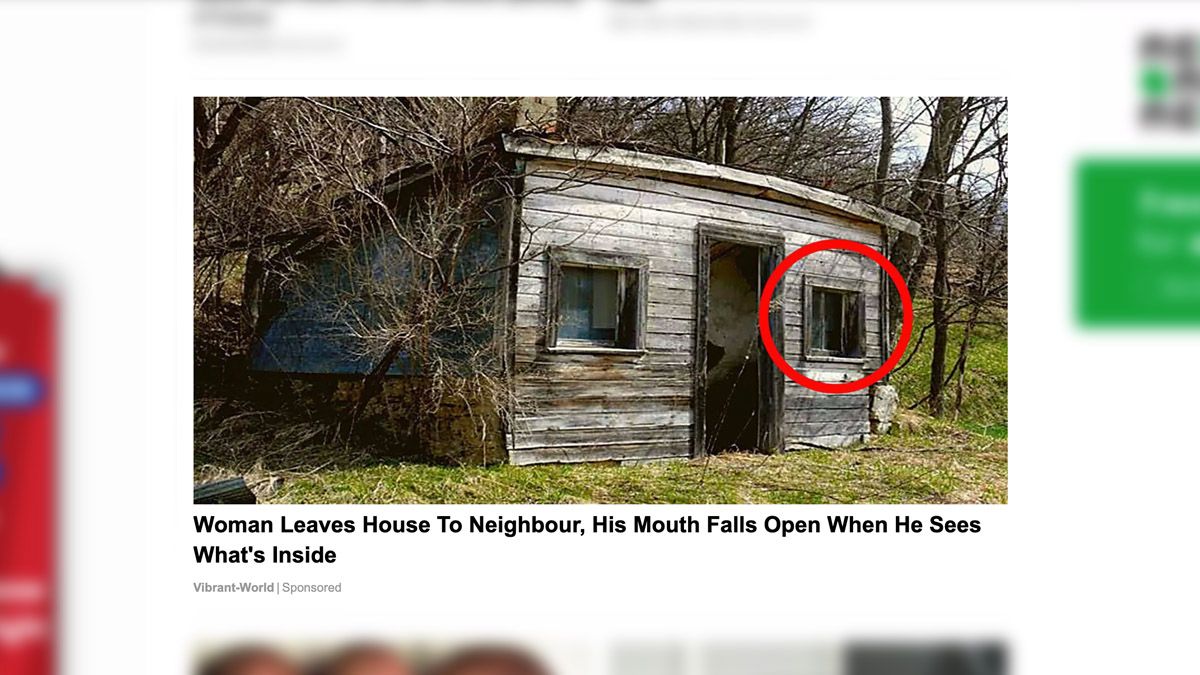 According to an ad a woman leaves house to neighbour his mouth falls open when he sees what's inside. (Image Via dailyforest.com)

Since at least 2021, an online advertisement has claimed: "Woman Leaves House to Neighbour, His Mouth Falls Open When He Sees What's Inside." The picture shows a red circle on a window. We found the same sort of story in a YouTube video titled: "96 Year Old Woman Donates Her House To A Neighbor Her Heart Drops When She Went Inside."

However, this is all very misleading.

The ad, hosted by the Taboola advertising network, likely appeared alongside legitimate news stories on websites for news organizations. This perhaps gave the impression to readers that it was a genuine account of a remarkable moment.

We clicked the ad. It led to a 50-page slideshow article on a website named Mister Story. The story was about a 96-year-old woman named Elly. The first page read as follows, including the last part which was bolded by the author:

This 96-year-old woman could no longer live in her cottage because she had to go to a care home and so she decided to donate her home to a homeless person, who was always nearby. He was desperate to have a roof over his head and so he moved in in good spirits.

But what he found inside was stunning!

In the story, Elly fractures her hip, and her family urges her to move into a retirement home near them. She decides to leave her house to a homeless man named Steven, who eventually finds $15,000 in cash inside the dwelling. Elly later tells him the money is to repay him for his "kindness and help." In the end, she dies in the retirement home. No last names were provided anywhere in the tale.

While this is a nice story, it's also completely made up. We found a disclaimer on the 50th page of the slideshow article that said the story is for "entertainment purposes":

Steven would see Elly one more time before she passed away. He went to visit her in the retirement home about 6 months after she had given him the house and the money. He could call a million times, but he had to thank her at least once in person. Thank the person who changed his life forever.

*This is a story for entertainment purposes. The photos that have been used are Stockphotos.

In other words, the "Woman Leaves House to Neighbour" story was simply a work of fiction, something that wasn't revealed to readers unless they clicked "Next Page" around 50 times.