Woman Slices Off Rapist's Genitals, Forces Him to Eat It at Gunpoint

A fake news site posing as Los Angeles-area television station KTLA spread a fabricated but juicy tale of a woman's revenge on her assaulter. 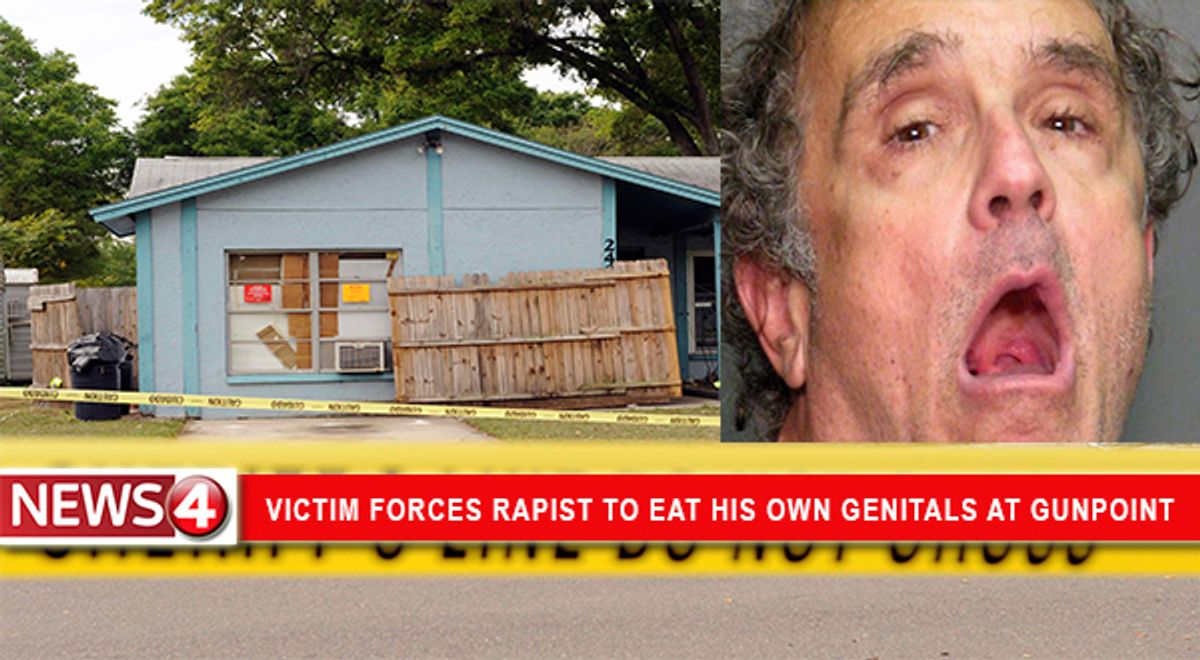 Claim:
A woman sliced a rapist's genitals off and forced him to eat them.
Rating:

On 5 April 2016 the web site News4KTLA published an article reporting that a female rape victim had cut off a rapist's genitals and then forced him to eat them:

A gruesome scene unfolded in a Fayetteville, North Carolina neighborhood after a convicted child molester kidnapped a 19-year-old woman and took her back to his home and assaulted her. Kimberly Walt was walking home from her friends house on Sunday afternoon when she says she was approached by Robert Williams, a three-time convicted felon. Williams asked her if she wanted a ride to where ever she was going, Walt replied “No thank you.” That’s when she said Williams drove off, but when she turned the corner he jumped out of the bushes, grabbed her and threw her in his car.

Williams took Walt to his home where he proceeded to assault her for several hours. According to police reports, Williams fell asleep after drinking massive amounts of alcohol and Walt was able to untie herself. She then approached Williams, tied him up, and in a bit of rage, grabbed a knife and “castrated him.” Walt stated that he woke up screaming and yelling, as she walked over with his “parts” and toss them in the microwave. “I threw that bastards junk in the microwave, grab the plate, fork and a steak knife and cut it up like hot dogs,” said Walt and a recorded statement. “I grabbed a gun that he had left on the kitchen counter, walked over to him, and forced him to eat it. I have no remorse and I am not sorry. That bastard deserved it and he’s going to hell.”

The photograph of the purported rapist was in actuality an old mugshot taken on or before 4 October 2014, unrelated to any rape cases in April 2015.

While News4KTLA carries no disclaimer warning readers its content is fabricated (its "About" page simply describes it as "local news for southern Louisiana and the surrounding area"), the site appears to be one of many fly-by-night fake news purveyors using visual and call-letter elements to trick social media users into spreading misinformation.