Do Photos Show Prince William and Kate Being Carried by People of Color?

The gossip website TMZ produced photographs from 2012 in response to the Duke of Cambridge's insistence that the royal family were "very much not racist." 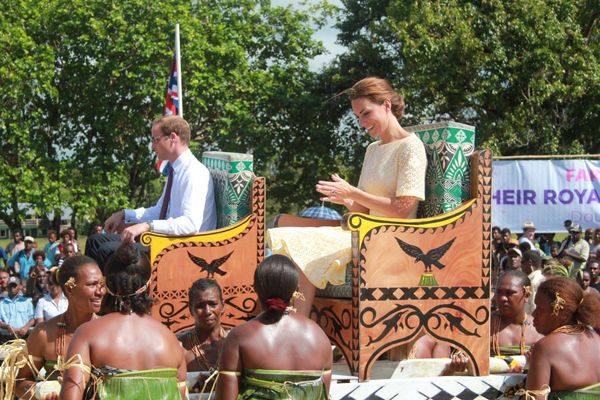 Claim:
Photographs showing Prince William and Kate Middleton being carried on portable thrones by people of color were authentic.
Rating:

In March 2021, controversy once again engulfed the British royal family after Prince Harry and Meghan Markle suggested in a high-profile interview with Oprah Winfrey that the family and associated institutions were beset by racial prejudice.

In response, Harry's brother, Prince William, the Duke of Cambridge, insisted that theirs was "very much not a racist family."

On March 12, however, the gossip and celebrity news website TMZ published old photographs of William and his wife, the former Kate Middleton, or the Duchess of Cambridge, being carried on litters, or portable thrones, by people of color, and suggested they undermined any claims that the royal family was not racist. The article stated that:

Prince William insists the Royals are "very much not a racist family," but photos of him and his wife being carried on elevated thrones don't exactly reflect that... They show him and Kate Middleton being carried on thrones back in 2012 by people of color in the Solomon Islands. William and Kate were on their Diamond Jubilee tour of the British Commonwealth nations in the South Pacific at the time.

For the purposes of this fact check, we will set aside the fairness and soundness of TMZ's arguments about what the photographs symbolize, and whether or how they undermine William's claims that the royal family is "not racist." Our immediate focus is on the authenticity and origins of the two pictures included in the article, one of which showed William and Kate being carried on two separate thrones, side by side, and the other of which showed just William, smiling as he is carried on the same throne. In both cases, the royals are being carried by what appear to be islanders, all of whom are Black, wearing traditional attire.

The photographs were authentic and accurately described by TMZ. The originals can be found on the website of the Getty Images agency, here and here. Both were taken by photographer Samir Hussein on Sept. 18, 2012. The caption for each photo is very similar:

Prince William, Duke of Cambridge and Catherine, Duchess of Cambridge are carried from the boat from the dock to the plane in Marau on day 8 of their Diamond Jubilee tour of the Far East on September 18, 2012 in Honiara, Guadalcanal Island. Guadalcanal Island is the largest of the Solomon Islands, located around 1,000 miles northeast of Australia, and 3,600 miles southwest of Hawaii, in the South Pacific Ocean. As the Getty caption stated, the Duke and Duchess of Cambridge were visiting the island in an official capacity as part of Diamond Jubilee celebrations to mark 60 years since Queen Elizabeth II's coronation in February 1952.