Will Landlines Eventually Dial 911 or Emergency Services if Left Off the Hook?

Long-circulating rumors hold that phones left off the hook will eventually dial emergency services to ensure that nothing bad has happened to the caller. 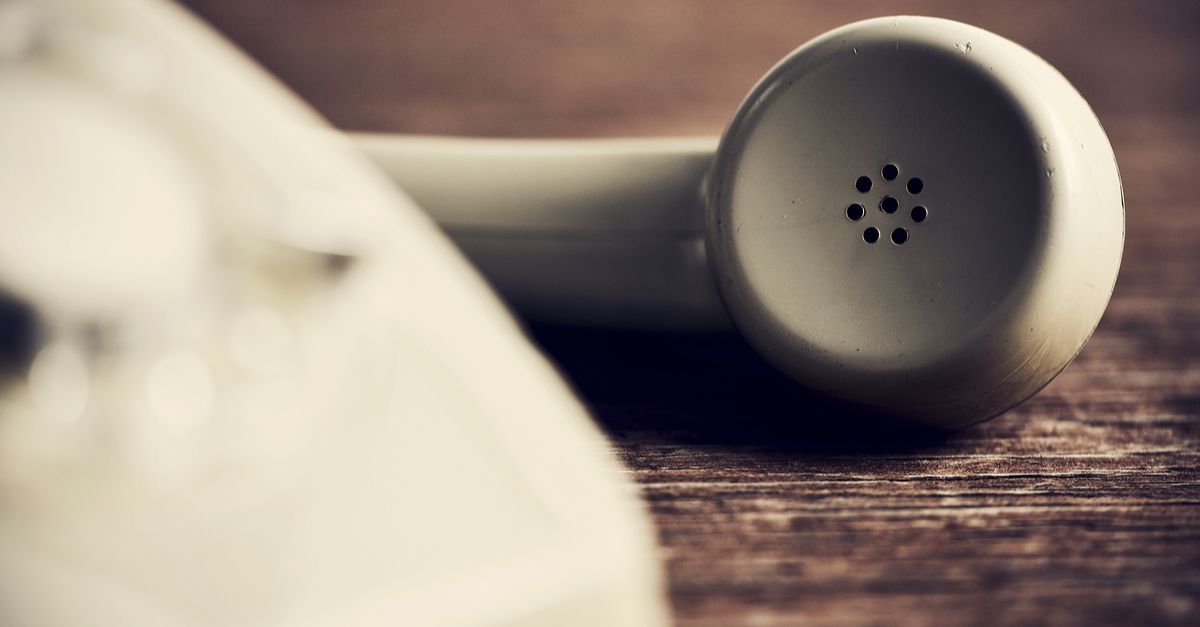 Claim:
A landline disengaged from its cradle will eventually self-dial 911.
Rating:

The advent of various technologies enabling contact with emergency services (or easier identification during such an event) has not quelled interest in core functions of long-standing institutions such as 911 and the Emergency Alert System (EAS).

A side effect of the advancement of gadgets and networks into our daily lives is lingering concern those devices will one day fail us; even the cellular phone was (in the not-so-distant past) eyed with some skepticism by first responders.  Accordingly, the notion police or paramedics are best summoned via landline due to its long-developed and trustworthy capabilities remains despite the popularity and ubiquitousness of mobile phones.

Landlines are are thought to make it easier to track down a person in need of assistance — and in films or on television, mobiles seem to regularly fail in moments of high tension (clip contains some profanity):


Those entrenched notions coupled with a basically obsolete (yet similar) function associated with dying cordless handsets may have inspired a long-circulating rumor, which asserts that landlines are so trustworthy they'll even dial 911 for you if you are unable to complete dialing and do not replace the phone in its cradle.

Various versions of that rumor have circulated in both the United States and the United Kingdom, dating back to at least 2006. The rumor's functionality exists on at least two levels: one cautioning against inadvertently summoning the police (leading at best to embarrassment and at worst, actual harm), and another reassuring people (inaccurately) that even if you cannot complete a call for help, the cavalry will eventually arrive all the same. The latter notion is one where belief in the claim presents a risk, suggesting that one need only knock a landline off its receiver to eventually summon first responders.

We contacted the Federal Communications Commission, which referred us to the National Emergency Number Association (NENA):

As The Voice of 9-1-1™, NENA is on the forefront of all emergency communications issues. The association serves its members and the greater public safety community as the only professional organization solely focused on 9-1-1 policy, technology, operations, and education issues. With more than 9,000 members in 48 chapters across the United States and around the globe, NENA promotes the implementation and awareness of 9-1-1, as well as international three-digit emergency communications systems ... Through the association’s efforts to provide effective and efficient public safety solutions, NENA strives to protect human life, preserve property, and maintain the security of our communities.

A NENA representative told us he was unfamiliar with the rumor, adding that to the best of his knowledge a "presented dial tone will time out and the line will become inaccessible to inbound calls."  (Or, to put it another way, a "busy signal.")

Until the mid-2000s, mobile phones were largely considered a secondary form of contact to be used sparingly in the absence of a landline, and fixed-location phones were often inadvertently or (perhaps more often) deliberately left "off the hook" to disable incoming calls — a not uncommon occurrence, as one New York Times writer lamented in 2012:

But there was also another part of the Friday night ritual — very likely the most important part. “Nick, go and take the phone off the hook,” my father would command.

I’d excitedly rush into the hallway, lift up the phone receiver, and toss it to the floor. Then, I’d race back into the living room before showtime. As the opening credits for the movie began, the phone left off the hook would echo in the hall: Beep. Beep. Beep. Beep … and then, silence.

No way to answer the phone, and no way to leave a message, meant that no one could get through. And rightly so: it was movie night, after all.

Technology has brought along with it alternatives for individuals to summon help without dialing 911 and speaking to an emergency dispatcher, a particularly useful function in dangerous situations where a victim cannot discuss their situation. However, experts in emergency telecommunications have confirmed that simply knocking the phone off the hook was never a failsafe for callers in need of assistance. And while people and pets (and the occasional tomato) have on occasion accidentally summoned the police, they did not do so by simply removing a receiver from its hook.