Was White Supremacist Who Killed Protester a Democrat Who Visited Obama in Oval Office?

Fake news web sites floated an incoherent story alleging that a white supremacist arrested for vehicular attack in Charlottesville, Virginia is a Democrat who met with Obama in the White House. 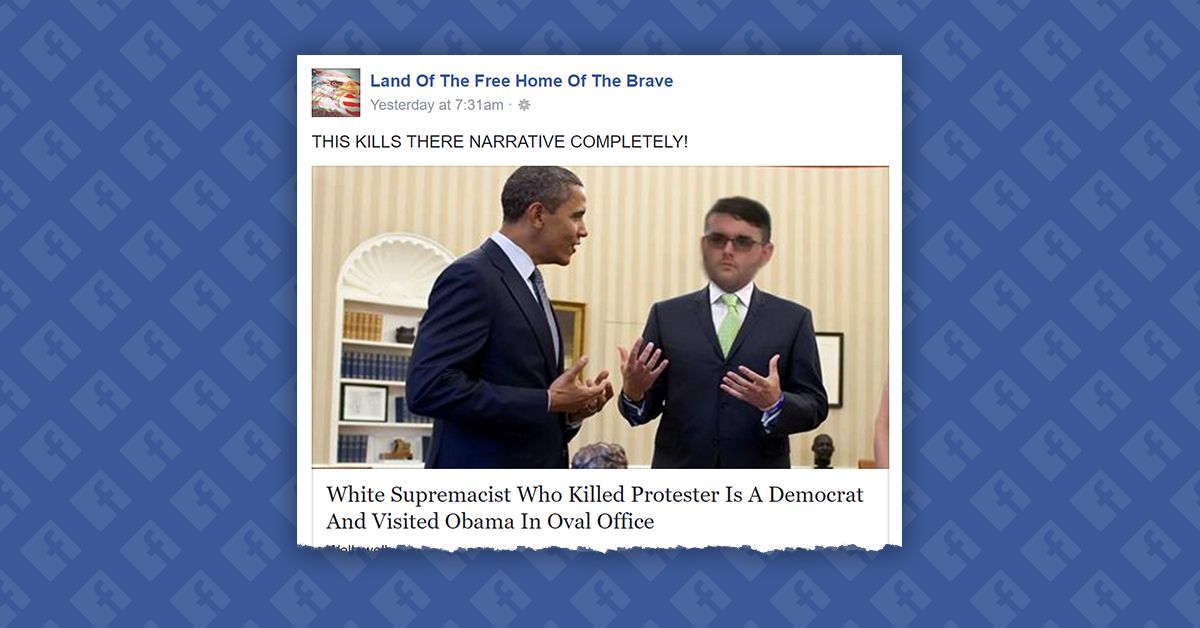 Claim:
A man who was either the organizer of the 2017 white nationalist rally in Charlottesville, Virginia or the driver of the car that ran down protesters, killing one, is a Democrat who was photographed meeting President Obama in the Oval Office.
Rating:

On 15 August 2017, the "satirical" web site Our Land of the Free published an article with a headline stating that the white supremacist accused of killing a protester days earlier at a neo-Nazi rally in Charlottesville, Virginia, is a Democrat who visited President Obama in the White House.

The author misidentifies the man accused of a fatal vehicular attack in the body of the article, however, confusing him with the rally's organizer, Jason Kessler:

Conservative author Dinesh D’Souza uncovered something that blows the Left’s whole narrative to bits. While they have been throwing around claims that the white supremacist who ran over a protester who was blocking the road is a Republican, D’Souza discovered he actually an Obama-supporting Democrat.

“Rumors abound on white nationalist forums that Kessler’s ideological pedigree before 2016 was less than pure and seem to point to involvement in the Occupy movement and past support for President Obama,” the Southern Poverty Law Center notes in their profile of Kessler.

To be perfectly clear, the aforementioned Jason Kessler is not the man who drove a car into a group of counter-protesters at the rally, killing one. The person charged with that crime is James Alex Fields, Jr., 20, of Maumee, Ohio. Kessler was the primary organizer of what he described as the "pro-white demonstration" in Charlottesville.

Moreover, the photo presented by Our Land of the Free as evidence that Kessler is a Democrat is one of the more ludicrous digital manipulation jobs we've encountered in awhile:

Kessler didn’t just support Obama; he visited the Oval Office in 2016. Here’s a photo of the two of them having a fun chat: As best we can tell, that is accused Charlottesville killer James Fields' face (not Jason Kessler's) lamely pasted into the image, but the body doesn't belong to either of them. We located a copy of the original, unaltered photo, taken by official Obama White House photographer Pete Souza, and found that it documented an Oval Office encounter between President Obama, comedian Will Ferrell, and Ferrell's wife, Viveca in October 2011: As we observed earlier, Our Land of the Free is a "satire" web site, per this disclaimer found at the bottom of every page of the site:

We believe in the right to be free. No matter what, the freedom to do what we want, say what we want and publish what we want comes first. Therefore we make no guarantee that what you read here is true. In fact, it most definitely is not. Our Land Of The Free is here to entertain you with the kind of whimsical satire conservatives enjoy.

Potentially confusing for inattentive readers will be the fact that some of the untrustworthy sites reposting the article (Patriot USA and News Feed Observer, to name two) carry no such disclaimer. Regardless of where you read it, the story is false.

Bertrand, Natasha.   "Here's What We Know About the 'Pro-White' Organizer of 'Unite the Right,' Who Was Chased Out of His Own Press Conference."    Business Insider.   14 August 2017.

Our Land of the Free.   "White Supremacist Who Killed Protester Is a Democrat And Visited Obama In Oval Office."    15 August 2017.

Clarification: The face pasted into the image, which we initially identified as Jason Kessler's, appears instead to be that of James Alex Fields, Jr.