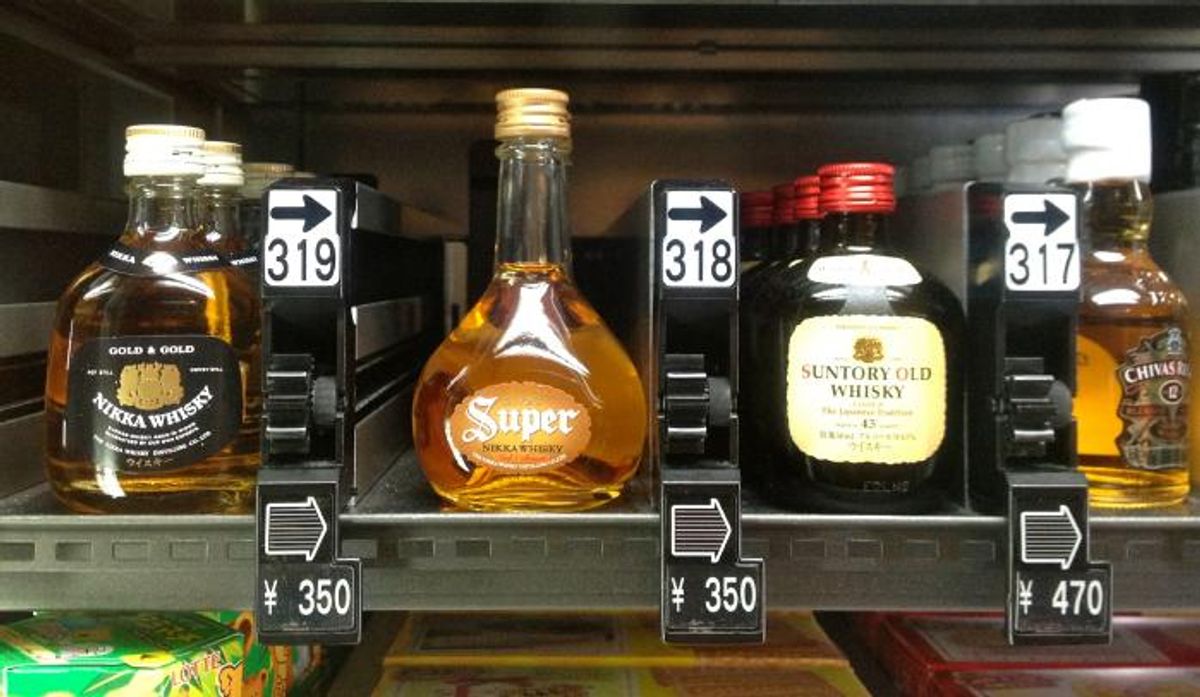 A photograph shows a working whisky and soda vending machine.

This type of vending machine was not a ubiquitous fixture in workplaces of the 1950s and 1960s.

A photograph purportedly depicting a "whisky vending machine" from the 1960s is frequently shared on online along with the claim that this type of device was commonly found in workplaces of the era:

Hi, there have been some pics going around Facebook of a 1960's "Ice Cold Whisky Dispenser." The picture explains that these whiskey vending machines were common in many offices at that time. Is there any legitimacy to this rumor? Two common misconceptions about commonly spread in conjunction with this image of a whisky vending machine. First, while this machine pictured did dispense a "full measure" of whisky, it was designed to mix the liquor with soda or water rather than deliver it straight. Second, this photograph was not taken in a business workplace.

According to the caption supplied by the picture's rightsholder, Corbis Images, this photograph originated at a 1960 trade show for vending machine manufacturers:

Monica Bays pours herself a whisky and soda from an automatic vending slot machine at a trade fair. The machine, produced by Rollason Aerocessaries of Croydon, mixes whisky, water and soda when you insert 2 shillings and sixpence. Time switches ensure it locks automatically to conform with licensing hours.

The Second Automatic Vending Exhibit and Convention was held in February 1960. A brochure from the event notes that two other liquor vending machines were on display at the convention, one that dispensed a gin and tonic and the other a rum toddy. While these automated liquor vending devices may have captured the online world's attention in the 21st century, the most popular drink dispenser shown at the Automatic Vending Exhibit back in 1960 was actually a tea machine.

The exhibit also featured vending machines for pens, towels, milk, bakery items, soups, combs, razors, chocolate, cold buffet items, and cigarettes. Some of these dispensers were still in use in the 21st century, while others, such as the whisky vending machine, are rarely seen outside the collections of vintage vending machine aficionados. But although the single drink whisky vending machine may be a rarity nowadays, machines that vend bottles of alcohol (as seen in the image at the head of this page) are not so uncommon.