What's in the 'Pulp Fiction' Briefcase?

The question of what the briefcase sought by the main characters in 'Pulp Fiction' contained is one of filmdom's most enduring mysteries. 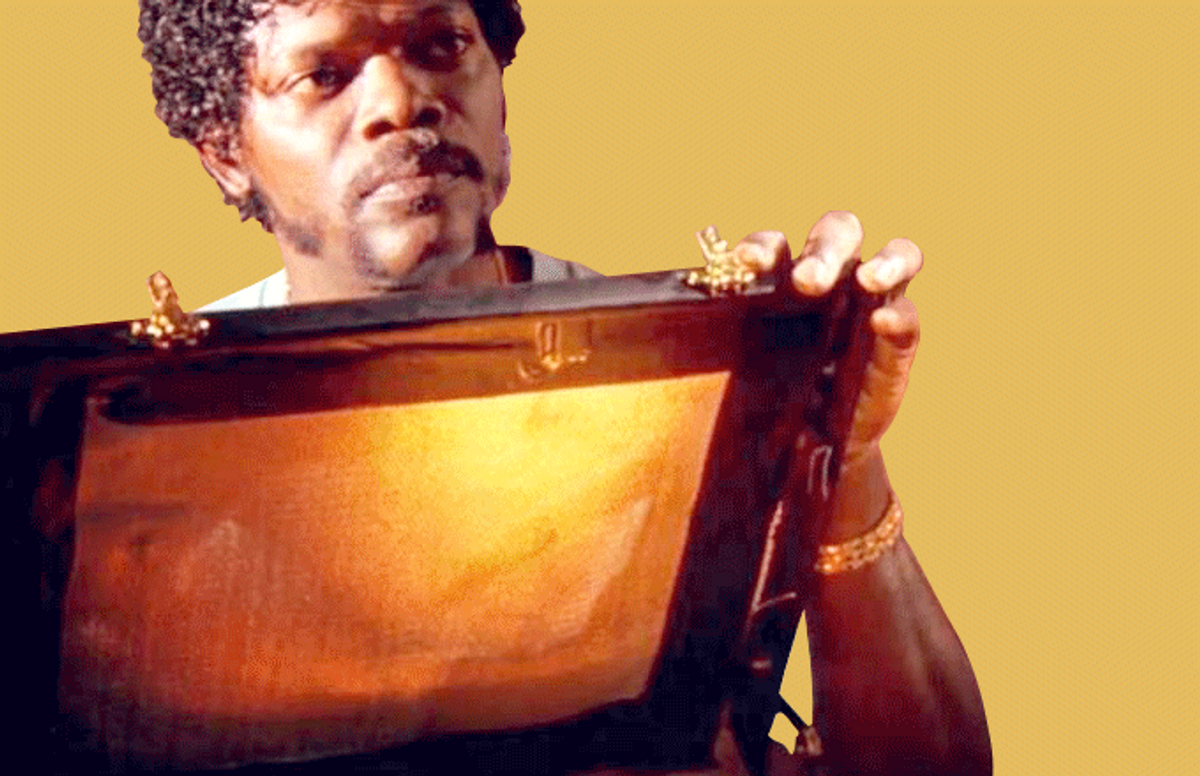 Claim:
The briefcase retrieved by Vincent Vega and Jules Winnfield in the film Pulp Fiction contained the soul of their boss, Marsellus Wallace.
Rating:

Much debate centers around the contents of the briefcase in Quentin Tarantino's 1994 film Pulp Fiction. A theory that has been passed around via e-mail and is prominent on the Internet is the following:

If you all are anything like me then you had no idea what was in the briefcase in Pulp Fiction. So, through a friend of a friend of a friend who had a two hour conversation with Quentin Tarantino himself, I now know, and I thought I would pass along the information because it makes the movie even better than it already is.

Remember the first time you were introduced to Marsellus Wallace. The first shot of him was of the back of his head, complete with band-aid. Then, remember the combination of
the lock on the briefcase was 666. Then, remember that whenever anyone opened the briefcase, it glowed, and they were in amazement at how beautiful it was; they were speechless. Now, bring in some Bible knowledge, and remember that when the devil takes your soul, he takes it from the back of your head.

Yep, you guessed it. What is the most beautiful thing about a person: his soul. Marsellus Wallace had sold his soul to the devil, and was trying to buy it back. The three kids in the beginning of the movie were the devil's helpers. And remember that when the kid at the end came out of the bathroom with a "hand cannon," Jules and Vincent were not harmed by the bullets. "God came down and stopped the bullets" because they were saving a soul. It was divine intervention.

[Note: Nowhere in the Bible is it stated that "when the devil takes your soul, he takes it from the back of your head."]

However, that this interpretation came directly from Tarantino conflicts with other accounts. According to Tarantino A to Zed: The Films of Quentin Tarantino:

Tarantino has admitted that there is no official explanation behind the briefcase's contents, and that it was simply written into the screen play as an intriguing McGuffin.

And from Roger Ebert's Questions for the Movie Answer Man comes the following statement by Pulp Fiction Roger Avery:

Originally the briefcase contained diamonds. But that just seemed too boring and predictable. So it was decided that the contents of the briefcase were never to be seen. This way each audience member would fill in the blank with their own ultimate contents. All you were supposed to know was that it was "so beautiful." No prop master can come up with something better than each individual's imagination. At least that was the original idea. Then somebody had the bright idea (which I think was a mistake) of putting an orange lightbulb in there. Suddenly what could have been anything became anything supernatural. Didn't need to push the effect. People would have debated it for years anyway, and it would have been much more subtle. I can't believe I'm actually talking about being subtle.

There have been many other theories on what is contained in the mysterious briefcase. A contest run by the Toronto Star to decide the contents produced several popular answers:

The winner of the contest claimed it was a homage to Robert Aldrich's Kiss Me Deadly, which centers around another briefcase, glowing because it contained a small nuclear bomb. Tarantino maintains that the similarity was purely accidental, although he apparently liked the idea.