Did Alexander Fleming's Father Save Winston Churchill from Drowning?

Did a grateful father fund the education of the poor farmer's son who discovered penicillin? 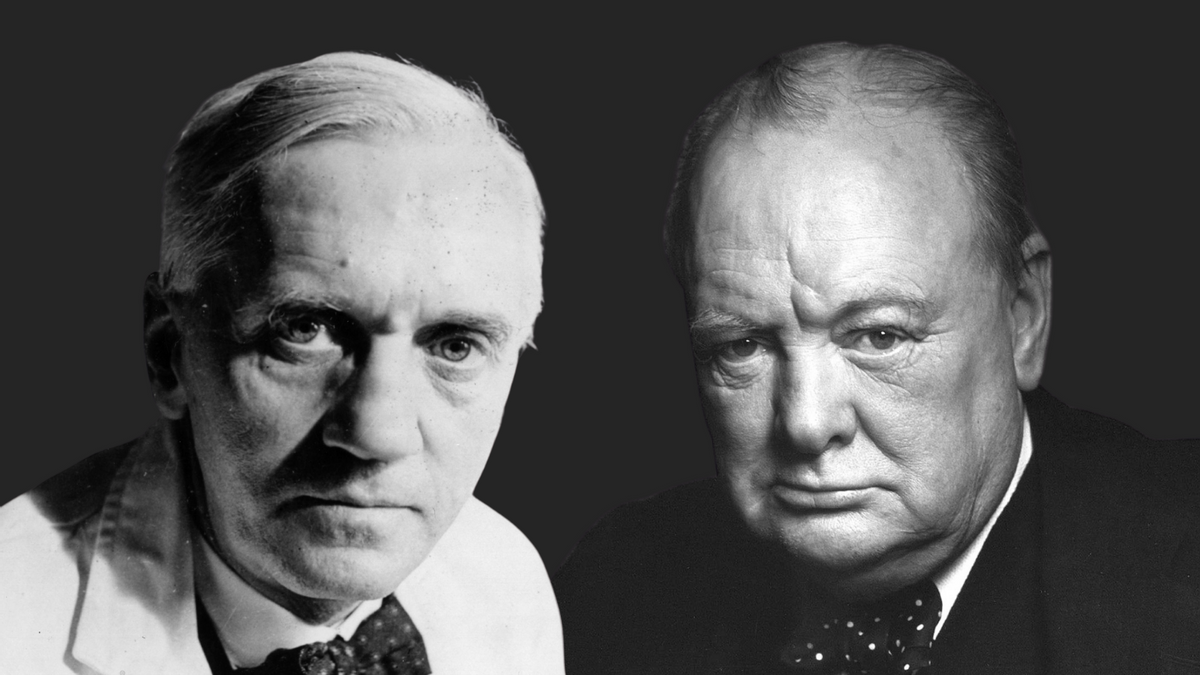 Claim:
The father of Alexander Fleming, the discoverer of penicillin, saved a young Winston Churchill from drowning; in gratitude Churchill's father paid for Fleming's education.
Rating:

Most of us are familiar with the basic penicillin legend: a London bacteriologist notices something unusual about the mold growing in an uncleaned Petri dish and ends up making one of the greatest medical discoveries of all time. What if the only reason this medical pioneer, the son of a poor farmer, had been able to receive the education that allowed him to make this monumental scientific breakthrough was his father's chance encounter years earlier with another (future) giant of 20th century history? And, in a delicious conclusion, the scientist later used his discovery to save his benefactor's life? Wouldn't that be an astounding and inspiring coincidence?

It would. If only it were true.

His name was Fleming, and he was a poor Scottish farmer. One day, while trying to eke out a living for his family, he heard a cry for help coming from a nearby bog. He dropped his tools and ran to the bog. There, mired to his waist in black muck, was a terrified boy, screaming and struggling to free himself. Farmer Fleming saved the lad from what could have been a slow and terrifying death.

The next day, a fancy carriage pulled up to the Scotsman's sparse surroundings. An elegantly dressed nobleman stepped out and introduced himself as the father of the boy Farmer Fleming had saved.

"I want to repay you," said the nobleman. "You saved my son's life."

"No, I can't accept payment for what I did," the Scottish farmer replied, waving off the offer. At that moment, the farmer's own son came to the door of the family hovel.

"Is that your son?" the nobleman asked.

"I'll make you a deal. Let me take him and give him a good education. If the lad is anything like his father, he'll grow to a man you can be proud of."

And that he did. In time, Farmer Fleming's son graduated from St. Mary's Hospital Medical School in London, and went on to become known throughout the world as the noted Sir Alexander Fleming, the discoverer of Penicillin. Years afterward, the nobleman's son was stricken with pneumonia. What saved him?? Penicillin.

Someone once said what goes around comes around.

The first clue that should make us skeptical of this too-good-to-be-true tale is that it exists in multiple forms. For example, here are a couple of other common versions:

A British family journeyed to Scotland for a summer vacation. The mother and father were looking forward to enjoying a beautiful Scottish countryside with their young son.

But one day the son wandered off all by himself and got into trouble. As he walked through the woods, he came across an abandoned swimming hole, and as most boys his age do, he took off his clothes an jumped in!

He was totally unprepared for what happened next. Before he had time to enjoy the pool of water, he was seized by a vicious attack of cramps. He began calling for help while fighting a losing battle with the cramps to stay afloat.

Luckily, it happened that in a nearby field a farm boy was working. When he heard the frantic cries for help, he brought the English boy to safety.

The father whose son had been rescued was of course very grateful. The next day, he went to meet the youth who have saved his son's life. As the two talked, the Englishman asked the brave lad what he planned to do with his future.

The boy answered, "Oh I suppose I'll be a farmer like my father."

The grateful father said, "Is there something else you'd rather do?"

"Oh yes!" answered the Scottish lad. "I've always wanted to be a doctor. But we are poor people and could never afford to pay for my education."

"Never mind that," said the Englishman. "You shall have your heart's desire and study medicine. Make your plans, and I'll take care of the costs."

So, the Scottish lad did indeed become a doctor.

There is more! Some years later, in December of 1943, Winston Churchill became very ill with pneumonia while in North Africa. Word was sent to Sir Alexander Fleming, who had discovered the new wonder drug, penicillin, to come immediately. Flying in from England, Dr. Fleming administered his new drug to the ailing prime minister.

In the 1880s, a renowned member of the British parliament was in his carriage when it got stuck in the mud. A young farm boy saw his predicament and came over and put the carriage back on the road. The parliament member was surprised and asked, "Young man, what do I owe you for this?"

"Nothing," said the young man. "I consider a privilege to help."

The facts of none of these versions jibe with what we know of these people's lives. No Churchill biography we've found mentions young Winston's chance encounter with a Fleming, father or son. Alexander Fleming was born in a remote, rural part of Scotland and lived on an 800-acre farm that was a mile from the nearest house — not the sort of place where a vacationing Winston would have been likely to wander, or to be discovered by anyone if he had. As well, Winston was seven years older than Alexander, so young Alexander would probably have been too small to physically rescue the older and larger Winston from drowning.

But we don't have to speculate about those matters to disprove the tale. Alexander Fleming did not leave the farm to rush off to medical school to become the doctor he had supposedly always longed to be. In fact, young Alec (as he was then known) departed for London when he was 14, where his older brother Tom had studied medicine and opened a practice. Alec attended the Polytechnic School in Regent Street; after graduating, he entered the business world at the urging of his brother, worked as a clerk for a shipping firm for a few years, then joined a Scottish regiment when the Boer War broke out. It was not until after all of this that Alec decided to try his hand at medical school, and even then it was the encouragement of his older brother that was the deciding factor, not a lifelong yearning on Alec's part to become a doctor. Additionally, Alec's medical school education was financed with a £250 inheritance from a recently-deceased uncle, not an endowment from a grateful Randolph Churchill.

Nor is the other end of this tale true. Winston Churchill did come down with a sore throat and a high fever while in Tunis (on the way home from his December 1943 meeting with Franklin Roosevelt and Josef Stalin in Tehran), and the diagnosis of the medical team called in from Cairo by his personal physician (Charles Wilson, later Lord Moran) was pneumonia. According to Wilson's biography, Churchill was treated with sulphonamide (an antimicrobial, but one unrelated to penicillin) and digitalis (for his heart) and sent to bed to rest. By the time a specialist, Professor John Scadding, was flown in from London, Churchill was already well on his way to recovery. In short, Alexander Fleming was neither present nor consulted when Churchill was diagnosed with pneumonia, nor was penicillin used to treat the British prime minister.

According to the Churchill Archives Centre in Cambridge, Churchill publicly denied the Fleming story in 1946.

This bit of netsam aside, Alexander Fleming's life has already been the subject of considerable mythologizing. His discovery of penicillin was not the instant boon to medicine that we now assume it was. In fact, Fleming himself did not realize the significance of his findings: thinking he had developed a mere antiseptic that was too slow-acting and too difficult to produce in large quantities, Fleming failed to test his penicillin thoroughly, wrote a tepidly-received paper about it, and moved on to other work. There ended his real involvement with the "greatest medical advance of the 20th (or any other) century." In 1935, two specialists, Howard Florey, head of Oxford's William Dunn School of Pathology, and Ernst Chain, a Cambridge biochemistry PhD, took up where Fleming's paper left off and spent several years at the arduous laboratory work of refining and testing penicillin to produce the world's first effective antibiotic. Fleming visited the two men at the Dunn School after they published their first paper on penicillin in 1940 (by which time Chain thought Fleming was dead) and didn't reappear on the scene until after penicillin had proved itself invaluable during World War II. The press lauded the newly-emerged Fleming as the lone genius responsible for the miracle of penicillin, and he was awarded numerous honors, including a knighthood and the 1945 Nobel Prize for medicine. (The Nobel Prize committee, at least, was on the ball and named Florey and Chain as co-recipients of the honor.)