Were Students in Stockton, California Arrested During a March 2018 Gun Safety Protest?

A "militia" group on Facebook attempted to paint local high schoolers participating in a demonstration as irresponsible. 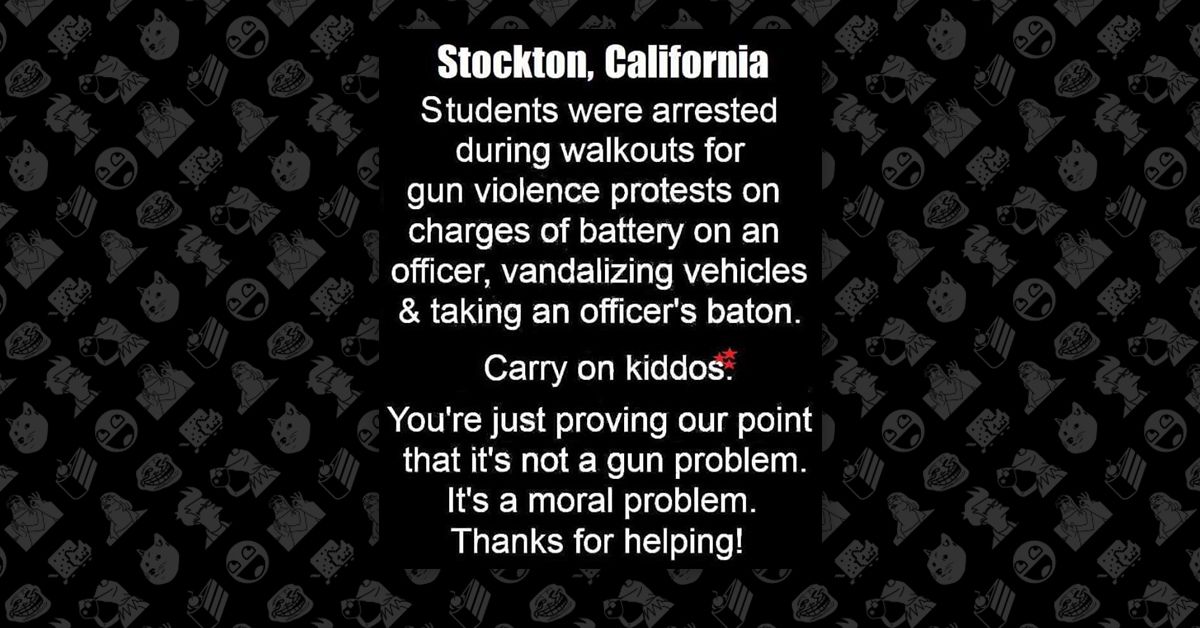 On 12 March 2018, a "militia" Facebook page based out of California seemingly attempted to disparage school protests around the U.S. calling for tighter gun safety laws, by claiming in a post that students in Stockton, California, used a local demonstration as an excuse to be unruly:

Students were arrested during walkouts for gun violence protests on charges of battery of an officer, vandalizing vehicles & taking an officer's baton.

You're just proving our point that it's not a gun problem. It's a moral problem. Thanks for helping!

While the allegation was posted around the time of the National School Walkout on 14 March 2018, the incident mentioned actually occurred on 23 February 2018, amid demonstrations at several high schools in Stockton.

The protests were held in response to the mass shooting attack at Marjory Stoneman Douglas High School in Parkland, Florida earlier that month, which caused the deaths of fourteen students and three staff members. Seventeen more people were wounded. Conspiracy theorists and far-right blogs later attempted to smear survivors of the attack as they began to make public calls for tighter legislation around firearm safety.

Five students at Stagg High School were arrested and accused of fighting with an officer after leaving the campus, as well as taking his baton. They were charged with battery on an officer, resisting arrest, and vandalism for allegedly throwing rocks at police vehicles. Around 100 of the 300 Stagg students who took part in the walkout reportedly jumped a fence in order to exit the school.

What the "militia" group did not mention was the aftermath; student leaders called for classmates to attend a rally, during which they signed a banner they planned to send to their counterparts at Stoneman Douglas High. Students also wrote letters apologizing to local police, as well as the Stoneman student body, for the actions of their classmates who were arrested.