Were Police Told to 'Stand Down' Amid Violence in Charlottesville?

Despite rumors, there was no "stand-down" order issued to police overseeing a white supremacist rally turned deadly in Virginia. 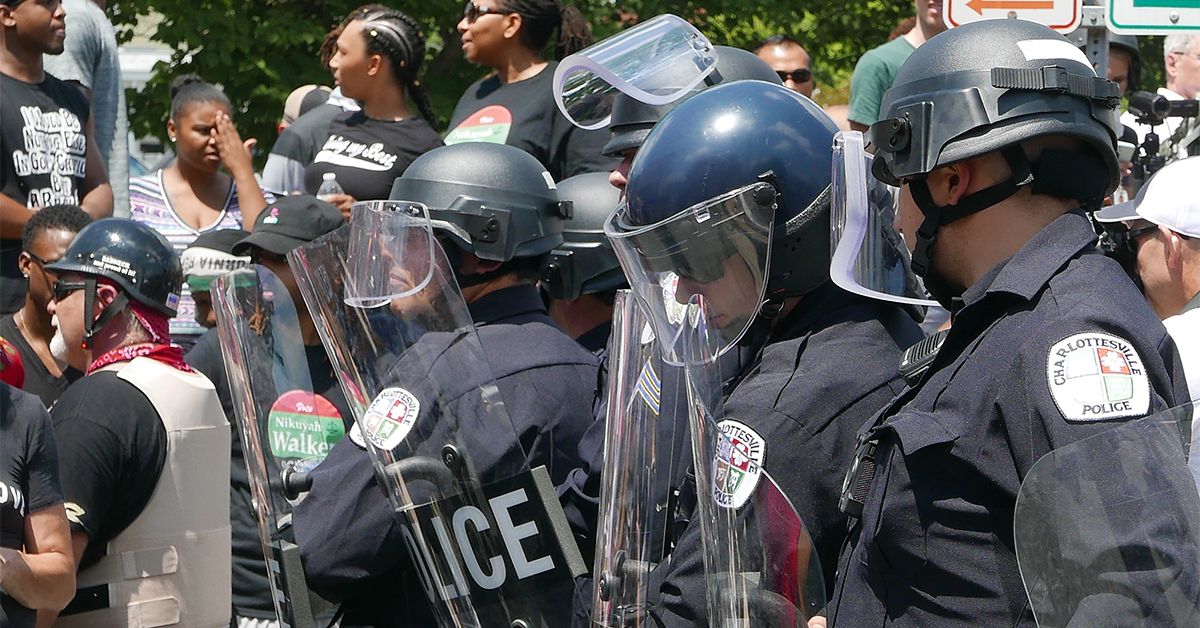 Claim:
Police in Charlottesville were issued a "stand down" order and told to let violence happen.
Rating:

On 15 August 2017, the disreputable web site YourNewsWire posted a story purporting to quote an "anonymous" police officer saying that law enforcement in Charlottesville, Virginia had been instructed not only to "stand down" during a violent white supremacist rally, but to instigate violence by purposely bringing rival groups together in order to start a race war.

YourNewsWire dives deep into conspiracy territory, claiming the chaos at the weekend rally was instigated by the "deep state," as well as former President Barack Obama and former Democratic presidential candidate Hillary Clinton:

The New World Order, led in the United States by elite operatives Obama, Podesta, Soros, Clinton and company, are pulling out all the stops to create division through chaos and destruction. Crowds of paid protestors and useful psychopaths are being sent into pitched battle against one another to sour the mood of the nation and further divide us all.

They are manipulating and controlling newsworthy events in order to maintain power and control over the public, and to swing public opinion.

We [Charlotesville police] were ordered to bring the rival groups together. As soon as they were in contact with each other, we were told to stand down. It was outrageous. We weren’t allowed to arrest anyone without asking the mayor first. We weren’t even allowed to stop the driver as he sped away. The event was being set up as far back as at least May and it went like clockwork. We wanted to do our job and keep the peace. But these mother******s in charge really want to destroy America.

We found no evidence the supposed quote being shared on the Internet and featured by YourNewsWire is authentic, and because it's not only unattributed but vague, we have no way of tracing it. However it only appears on YourNewsWire and other junk sites that cite YourNewsWire, a web site that regularly posts unfounded conspiracy theories.

Violence did plague the city of Charlottesville through the weekend of 11 August 2017, as protests, general unrest, and street brawls broke out surrounding the "Unite the Right" white supremacist rally. One woman was killed when a rally attendee reportedly purposely rammed his car into a crowd of counter-demonstrators, and two state police officers lost their lives when the helicopter they were flying to monitor the unrest crashed.

However we were able to confirm via a Freedom of Information Act request that no official "stand down" order was given.

The rumor seems to have its roots in a 12 August 2017 tweet posted by the Virginia chapter of the American Civil Liberties Union, which cited an unnamed police officer saying law enforcement would wait for a "command" before intervening in street clashes:

Clash between protesters and counter protesters. Police says "We'll not intervene until given command to do so." #Charlottesville pic.twitter.com/UkRDlNn2mv

There was nothing haphazard about the violence that erupted today in this bucolic town in Virginia’s heartland. At about 10 a.m. today, at one of countless such confrontations, an angry mob of white supremacists formed a battle line across from a group of counter-protesters, many of them older and gray-haired, who had gathered near a church parking lot. On command from their leader, the young men charged and pummeled their ideological foes with abandon. One woman was hurled to the pavement, and the blood from her bruised head was instantly visible.

Standing nearby, an assortment of Virginia State Police troopers and Charlottesville police wearing protective gear watched silently from behind an array of metal barricades — and did nothing.

It was a scene that played out over and over in Charlottesville as law enforcement confronted the largest public gathering of white supremacists in decades. We walked the streets beginning in the early morning hours and repeatedly witnessed instances in which authorities took a largely laissez faire approach, allowing white supremacists and counter-protesters to physically battle.

On 14 August 2017, Fox News reporter Doug McKelway claimed to have a specific police source that told him officers were ordered not to engage. He said:

Despite the critique by some that police didn't do enough to quell violence, both police Chief Al Thomas and city spokeswoman Miriam Dickler said no such order was issued. We filed a FOIA seeking any records documenting such an order by either the city, or by any agency outside the city to Charlottesville police and received this response:

We have no records responsive to this request.

Dickler explained to us why the claim that the mayor issued a stand-down order which police were required to obey is not possible: The city operates under a council-manager form of municipal government, meaning the city manager functions as the executive. Under this system, the mayor is selected by the City Council, not voters. The role rotates and is mostly ceremonial in its duties. Thus, Charlottesville Mayor Michael Signer would not have had the authority to issue a "stand-down" order to the police.

In the months following the deadly weekend, the city commissioned an independent review of the response to the white supremacist rally by the law firm Hunton & Williams, lead by former U.S. Attorney Timothy Heaphy. The scathing report released 1 December 2017 is heavily critical of the city's response and faults police for failing to prevent much of the violence with flawed planning and coordination that produced "disastrous" results. The report found that the failure of police to quell violence and block traffic while pedestrians fought and marched allowed for tragedy to strike:

The planning and coordination breakdowns prior to August 12 produced disastrous results. Because of their misalignment and lack of accessible protective gear, officers failed to intervene in physical altercations that took place in areas adjacent to Emancipation Park. VSP [Virginia State Police] directed its officers to remain behind barricades rather than risk injury responding to conflicts between protesters and counter-protesters. CPD commanders similarly instructed their officers not to intervene in all but the most serious physical confrontations. Neither agency deployed available field forces or other units to protect public safety at the locations where violence took place. Instead, command staff prepared to declare an unlawful assembly and disperse the crowd. When violence was most prevalent, CPD commanders pulled officers back to a protected area of the park, where they remained for over an hour as people in the large crowd fought on Market Street.

Once the unlawful assembly was declared, law enforcement efforts to disperse the crowd generated more violence as Alt-Right protesters were pushed back toward the counterprotesters with whom they had been in conflict. Once Emancipation Park was clear, the violent conflicts spread beyond the park. Small groups of people wandered through the streets and engaged in frequent skirmishes unimpeded by police. Violence erupted at the Market Street parking garage, Justice Park, High Street, the Water Street parking area, and on the Downtown Mall. Police attempted to respond to these violent conflicts, but were too far away and too late to intervene. The result was a period of lawlessness and tension that threatened the safety of the entire community.

The most tragic manifestation of the failure to protect public safety after the event was declared unlawful was the death of Heather Heyer. Early on August 12, CPD had placed a school resource officer alone at the intersection of 4th Street NE and Market Street. This officer feared for her safety as groups of angry Alt-Right protesters and counter-protesters streamed by her as they left Emancipation Park. The officer called for assistance and was relieved of her post. Unfortunately, CPD commanders did not replace her or make other arrangements to prevent traffic from traveling across the Downtown Mall on 4th Street. A single wooden saw horse was all that impeded traffic down 4th Street as large groups of people continued to roam the streets. This vulnerability was exposed when James Fields drove his vehicle down the unprotected street into a large crowd of counter-protesters at the intersection of 4th Street SE and Water Street, killing Ms. Heyer.

The report further alleges Charlottesville police command staff deleted text messages relevant to the review and two people -- a police captain and the chief's personal assistant -- told investigators that Thomas said that allowing people to fight in the streets would facilitate the declaration of an unlawful assembly, which would make it a crime for anyone to remain in the area:

Chief Thomas’s response to the increasing violence on Market Street was disappointingly passive. Captain Lewis and Chief Thomas’ personal assistant Emily Lantz both told us that upon the first signs of open violence on Market Street, Chief Thomas said “let them fight, it will make it easier to declare an unlawful assembly.” Thomas did not recall making that statement, though he did confirm that he waited to “see how things played out” before declaring the unlawful assembly. Regardless of what he said, Chief Thomas’ slow-footed response to violence put the safety of all at risk and created indelible images of this chaotic event.

Thomas's attorney Kevin Martingayle said the chief does not recall making that statement.

The report doesn't find evidence that a "stand down" order was explicitly given -- but it does say that the city and authorities failed to keep the peace and protect the safety of the community despite having a visibly large police presence:

We did not find evidence of a direct order to officers to “stand down” and not respond to fights and other disorders. Even if there was no explicit “stand down” order in place, CPD and VSP both failed to “stand up” to protect human life. Supervisors devised a poorly conceived plan that under-equipped and misaligned hundreds of officers. Execution of that plan elevated officer safety over public safety. The consequence was that many in the crowd felt physically vulnerable despite intense law enforcement presence, a perfect recipe for undermining the community’s faith in law enforcement.

Hunton and Williams. "Independent Review of the 2017 Protest Events in Charlottesville, Virginia."   24 November 2017.

This article was updated on 5 December 2017 to include findings of an independent review of the response by the city of Charlottesville and police to a deadly white supremacist rally in August 2017.