President Obama did not pardon a convicted drug dealer named Wendell Callahan, who was later charged with murdering three people after his early release from prison. 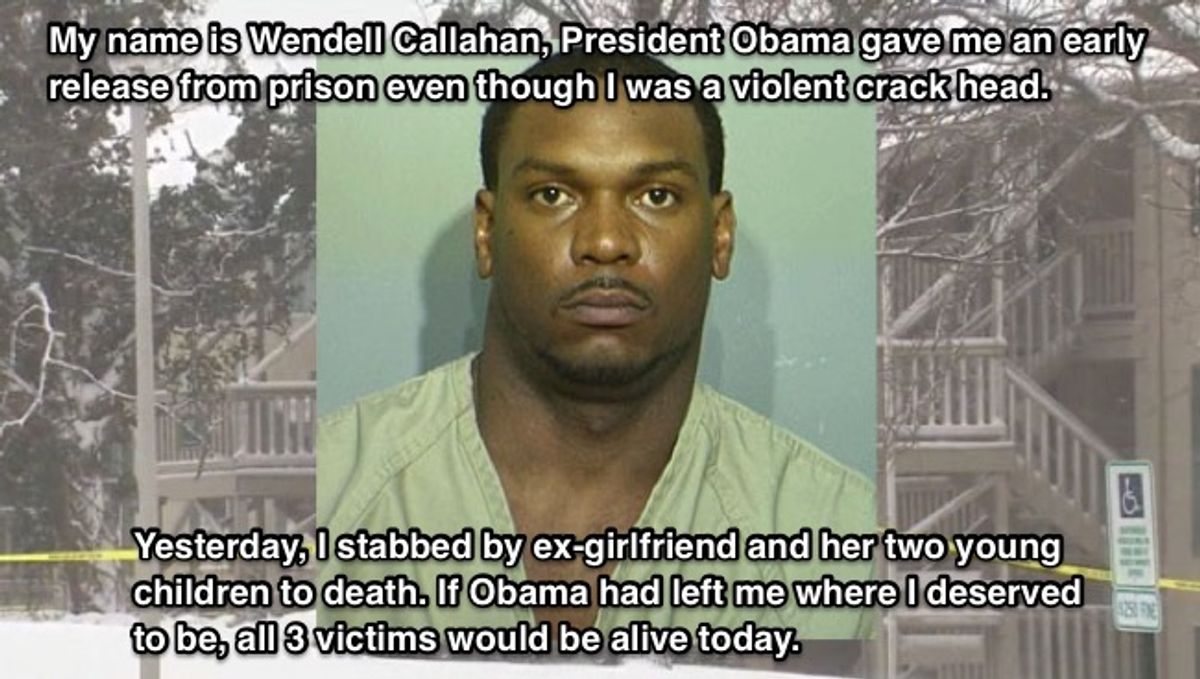 Claim:
President Obama pardoned a "violent crackhead" named Wendell Callahan, who went on to murder a woman and her two small children.
Rating:

Wendell Callahan was released from prison under the terms of the Fair Sentencing Act of 2010, and he was later charged with murdering three people in January 2016.

President Obama neither pardoned Callahan nor ordered his early release.

In March 2016, an image macro began circulating on Facebook, featuring a mug shot-type photograph of a man with the legend "MY NAME IS WENDELL CALLAHAN, PRESIDENT OBAMA GAVE ME AN EARLY RELEASE FROM PRISON EVEN THOUGH I WAS A VIOLENT CRACK HEAD. YESTERDAY, I STABBED MY EX-GIRLFRIEND AND HER TWO YOUNG CHILDREN TO DEATH. IF OBAMA HAD LEFT ME WHERE I DESERVED TO BE, ALL 3 VICTIMS WOULD BE ALIVE TODAY.": The image's use of "yesterday" as a temporal reference enabled it to circulate in perpetuity with the suggestion that the event it described was a recent occurrence. Indeed, on 1 September 2016, the Facebook page "True America" published the image, implying that President Obama had recently and personally "freed" a "violent crack head," who in turn had just murdered a woman and her two children: Information about Callahan was readily available online and several months out of date by September 2016). According to multiple news reports, Callahan was arrested in January 2016 and charged with murdering a woman and her two children:

A Columbus man is charged in an unspeakable act of violence: the murders of a mother and her two young daughters.

Neighbors called police to Erveena Hammonds’ apartment just before 1:30 AM.

Later news reports included information about Callahan's having receiving a reduced sentence for an earlier drug conviction, but those articles didn't report that President Obama had either pardoned Callahan or commuted his sentence. Instead, they noted that Callahan was released early due to changes in federal sentencing guidelines for drug offenses implemented in 2010:

The man charged with killing an ex-girlfriend and two of her children in a North Side stabbing rampage likely would have been deep into a 12 1/2-year federal prison sentence if sentencing guidelines for convicted crack dealers had remained unchanged.

Wendell L. Callahan, 35, twice benefited from changes in federal sentencing guidelines, which reduced his sentence by a total of more than four years, from the 150 months he was first given in 2007, to 110 months in 2008 including time served, and 100 months in 2011.

The changes to his federal sentence came as part of retroactive attempts by the U.S. Sentencing Commission to rectify sentencing disparities between dealers who sold crack and those who dealt powdered cocaine.

A February 2008 fact sheet [PDF] published by the Drug Policy Alliance showed that efforts to align sentencing for offenses involving crack and cocaine were initiated well before President Obama took office in January 2009. That publication documented a 1995 recommendation from the U.S. Sentencing Commission (USSC), as well as a 2007 effort by the USSC to change the sentencing disparities:

In May 2007, the USSC issued a report imploring Congress to act quickly to eliminate the sentencing disparity between crack and powder cocaine. Although federal law still calls for mandatory minimums triggered by the net weight of illicit substance, the USSC has now amended their sentencing guidelines, and applied the change retroactively, to lessen the punishment range for crack cocaine cases by approximately one to two years. The Commission's changes would reduce the average sentence from a little more than 10 years to a little under 9 years and would affect thousands of defendants in our criminal justice system.

The image was correct in stating that Wendell Callahan was arrested and charged with the murders of his girlfriend and two of her children, and that he had been released from prison early due to changes in sentencing procedures. However, he was released early not due to the intervention of President Obama, but due to the provisions of the Fair Sentencing Act of 2010, a bipartisan effort spearheaded by the USSC and based on recommendations first brought up in 1995.