Does Wearing Socks to Bed Cool Down the Body for Sleep?

A TikTok video about wearing socks to bed received more than 15 million views in its first day after being posted by a resident doctor. 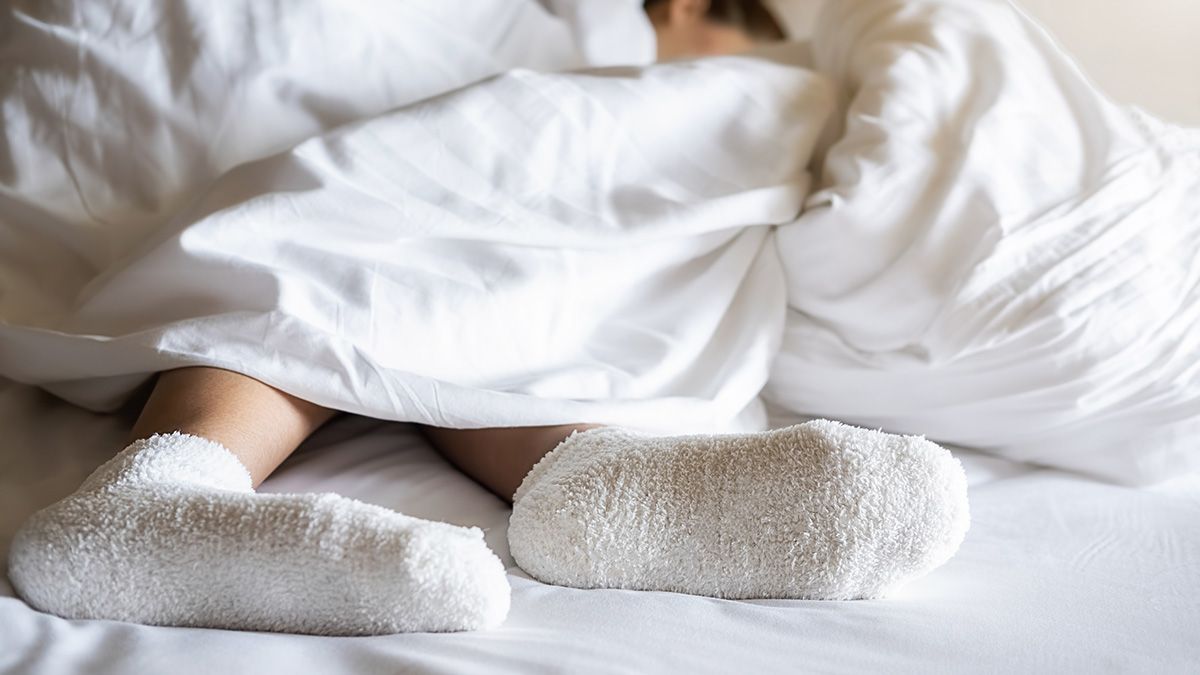 It's true that wearing socks to bed can warm the feet, which increases blood pressure and can help cool the body. They can also potentially help speed up the onset of sleep.

However, several factors may impact the effectiveness of socks, such as climate, indoor temperature, and personal preference. Also, for patients who may have sleep disorders, socks are not a substitute for sound medical advice from a doctor who practices sleep medicine.

On Feb. 10, 2021, a doctor posted a new TikTok video about the science of wearing socks while sleeping. Dr. Jessica Andrade is a resident doctor in Boston, Massachusetts. In the video, she said that wearing socks to bed can make your body cool down for a better night's rest.

It's mostly true that wearing socks to bed can cool the body down. Research in archived newspapers for past studies led us to an old Associated Press story.

In 1999, the AP published a story about a study that was conducted in Switzerland:

(AP) - Wearing socks to bed may not excite your partner, but it just might help you fall asleep.

A researcher says people with chronically cold feet might drift off faster if they warm their feet with socks or a hot water bottle.

That’s because the body appears to prepare for sleep by widening the blood vessels in the hands and feet to help radiate body heat away, according to a study.

Warming the feet and then removing the socks or water bottle would promote this dilation, said the researcher, Anna Wirz-Justice of the Psychiatric University Clinic in Basel, Switzerland. Most people go through the process naturally and wouldn’t need socks or a water bottle to help them sleep, she said.

The study, "Warm feet promote the rapid onset of sleep," involved "18 healthy young men" and was published in Nature magazine.

We reached out to sleep medicine specialist Dr. Atul Malhotra, who is a professor of medicine at the University of California, San Diego. He told us that the basic warming and cooling concept rings true, but that there's more to the story:

It's true that there was a paper in Nature, which was a top journal back in 1999, looking at warming up of the feet. The idea was if you have cold feet, it's really hard to fall asleep. And so, they argued that feet warmth helped sleep onset almost invariably. And it's also true that warming up the feet is what's called vasodilation where the blood flow increases and that does help to distribute the heat through the feet, and it's always cooling the body as you described.

The role of socks has been less well studied. There are some studies showing sleep onset is faster and overall sleep is better with people wearing socks [to bed], but I can say from clinical experience that that varies greatly. There are some people that prefer to wear socks and some people that don't. I don't give it as a blanket recommendation to everybody, but in some cases, it can be helpful.

The other point to make is that, it depends to some extent on your sleep environment. So if you're sleeping in the tropics and it's warm, then I doubt this is very helpful, versus in a colder climate where things are cold. And depending on how people heat or cool their house, [socks] may or may not be helpful. And certainly, I've had patients who really prefer not to wear them.

We also contacted Dr. Wendy Troxel, Senior Behavioral and Social Scientist, RAND Corporation. She said much the same as Malhotra about the study from 1999:

The study you reference did not actually measure sock wearing but rather looked at blood vessel dilation in the hands and feet, resulting in heat loss facilitates sleep. But I can speak to what the science shows, as I discuss in my soon-to-be-released book "Sharing the Covers: Every Couple’s Guide to Better Sleep."

As we sleep, our body temperatures naturally decline. In fact, a dip in core body temperature is a key signal to our brains that it’s time to fall asleep. There is evidence that taking a warm bath before bedtime could be good for sleep, for this very reason. While in the bath your temperature rises, but precipitously falls when you get out.

Malhotra also told us that socks shouldn't be a substitute for talking to a medical professional about sleep problems:

The other point to make is for people who have trouble with sleeping, there are sleep disorders that are common and worth talking to your doctor about. So for example, sleep apnea, sometimes people have trouble falling asleep. There are some forms of insomnia where people have trouble falling asleep or staying asleep. And something called restless leg syndrome, where people may have creepy-crawly discomfort in their feet and they can't fall asleep as a result of that condition. So if people have a problem, I recommend they talk to their doctor rather than buying socks or whatever.

There are a lot of over-the-counter, poorly-studied technologies that people try to tell you, saying "this will help your sleep." Often, I see people down the road where they have a disorder and they get it treated. And instead [before] they were buying different pillows, blankets, socks, or what have you. To me, that's a little frustrating because the people on television sell different pillows and blankets, which in some cases are nonsense to treat a medical disorder.

On March 11, 2019, Footwear News published that cotton or wool socks are recommended: "Wool is particularly favored because it is a breathable material and is naturally moisture-wicking, which means your feet will stay dry the whole night long."

Various articles also mentioned that moisturizing lotion can be applied to feet before putting on socks. This gives the skin on feet and toes a chance to repair during sleep. Just be sure to not add any onion.

In the course of our research, we came upon a 1988 letter to long-time advice columnist Ann Landers. We found it published in The Hartford Courant in Connecticut. The letter documented a case of taking sock-wearing perhaps a bit too far:

I've been married to a man for more than a year and have seen his feet only twice, when he was getting out of the shower. 'George' wears his socks everywhere, even to bed. Try to imagine making love to a man with his socks on. Oh brother, what a turn-off.

Last summer I bought George a pair of sandals, thinking I might get to see his feet for a change, but he fooled me. He wears socks with his sandals. Ever hear of anything so weird? What do you make of this, Ann?

Landers answered not with her advice, but rather with another letter. She wrote: "Dear Dothan: Let's just say it's 'different.' George's hang-up is inconsequential compared to some I've heard of. Read the next letter and you will never complain again."

The next letter was about a woman whose husband had not taken a shower in over a year.