Does This Photograph Show the Water Filtration Power of Oysters?

Oysters sustain themselves by sucking microscopic plankton out of the waters they inhabit, and this behavior also turns them into natural water filters. 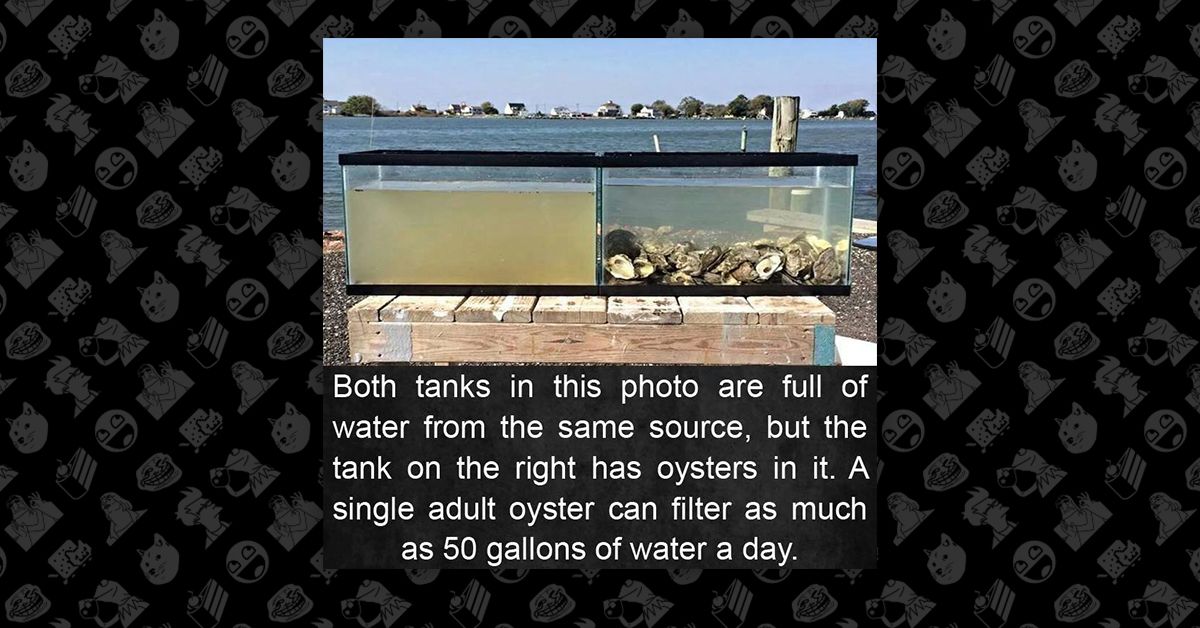 Claim:
One oyster can filter more than 50 gallons of water in 24 hours.
Rating:

Since at least 2014 a photograph of two aquariums — one seemingly full of cloudy, dirty water and the other housing a group of oysters in clear water — has bounced its way through social media: In this striking visualization we see two tanks filled with water from the Honga River, an estuary of the Chesapeake Bay. The tank on the right also contains oysters. Over the course of 2 hours those oysters filtered all of the algae out of the water. The demonstration shows how effective oysters are at naturally filtering water.

While we cannot confirm the exact parameters of the specific experiment in that photograph, we have no reason to doubt its authenticity. Oysters are famously efficient at cleaning up water, and this fact is commonly demonstrated by comparing oyster filled and non-oyster filled tanks, as was done in the following demonstration from the Florida Oceanographic Society:

Oysters are filter feeders who suck water through their gills, trapping particles that are between 1-10 microns in diameter, which is the size of their primary prey: phytoplankton.

According to the National Oceanic and Atmospheric Administration, one oyster can indeed “filter more than 50 gallons of water in 24 hours."

Obviously, this material does not simply disappear. Phytoplankton and nutrients contribute to the growth of both the oyster’s body and its shell, while other material is ejected in the form of feces. Even the material an oyster does not keep is still cleared from the water by being compressed into pellets that sink rather than float. These pellets are then deposited on the ocean (or tank) floor, no longer in suspension in the water.

While we cannot confirm the original source of the meme, and therefore confirm the specific claims of the experiment it describes, the claim that one oyster can filter more than 50 gallons of water in 24 hours is true, and the photograph appears to be of a common experiment used to illuminate that point.

Florida Oceanographic Society.   “Two Tanks Filled with the Same Water But One Has Oysters In It.”     21 August 2012.