Was Snopes.com 'BUSTED' for Our CEO's Ties to George Soros?

A meme about Snopes.com has been debunked by the very source it cites. 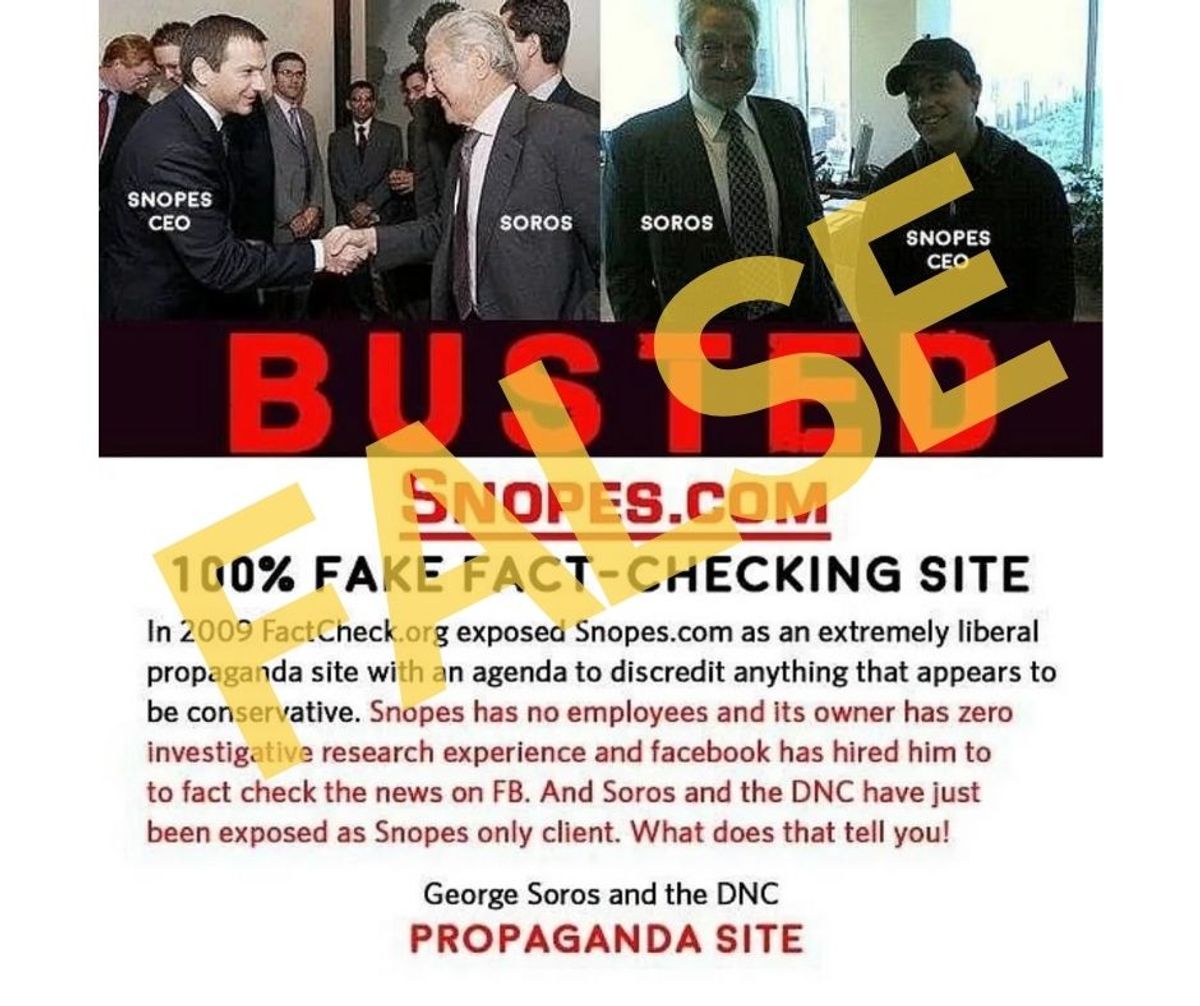 Claim:
Snopes.com is an extremely liberal site with an agenda to discredit conservatives, paid for either by George Soros or the Clintons, or maybe Facebook.
Rating:

In February 2018, a years-old rumor about us spawned yet another low-effort, extremely inconsistent meme: We are unable to tell whether this meme was created initially as a joke or whether it was belched out from the bowels of a propaganda site, but it is hitting our sitemail with enough regularity that we decided to address it.

The image shows two photographs side by side. To the left is an image of a man shaking hands with billionaire philanthropist George Soros; to the right is a man seated next to George Soros in what appears to be an office. The text of the meme reads as follows:

In 2009 FactCheck.org exposed Snopes.com as an extremely liberal propaganda site with an agenda to discredit anything that appears to be conservative. Snopes has no employees and its owner has zero investigative research experience and facebook has hired him to fact check the news on FB. And Soros and the DNC have just been exposed as Snopes only client. What does that tell you!

We would say that's quite a set of charges coming from the makers of this meme (whomever that might be) but it's so internally inconsistent as to fall apart with the barest scrutiny.

For example: "In 2009 FactCheck.org exposed Snopes.com as an extremely liberal propaganda site with an agenda to discredit anything that appears to be conservative."

FactCheck.org did write about us in 2009, in one of the only truthful statements that can be found in this meme. Here's what they actually said about our perceived political leanings:

Do the Snopes.com articles reveal a political bias? We reviewed a sampling of their political offerings, including some on rumors about George W. Bush, Sarah Palin and Barack Obama, and we found them to be utterly poker-faced. David does say that the site receives more complaints that it is too liberal than that it is too conservative. Nevertheless, he says, "We apply the same debunking standards to both sides."

Although our sites have somewhat different emphases ... Snopes.com does take on some claims in the political realm. That has given us an opportunity to evaluate the Mikkelson’s work from time to time. We have found it solid and well-documented. We even link to Snopes.com when it’s appropriate rather than reinvent the wheel ourselves, which we consider high praise.

Nowhere could we find where FactCheck.org wrote that we are a liberal propaganda site with a stated agenda to discredit anything conservative, because it didn't. But you don't need to believe us -- you can read it here yourself.

Moving on to the next part of the claim: "Snopes has no employees and its owner has zero investigative research experience and facebook has hired him to fact check the news on FB. And Soros and the DNC have just been exposed as Snopes only client. What does that tell you!"

The Facebook part is the only other part of this meme that is somewhat true, although the rest — as you may have guessed — is not. We did at one time partner with Facebook, working alongside other organizations around the world to fact-check corrosive fake news and propaganda.

A single glance at our staff page debunks the "no employees" lie. We are a team of highly experienced investigative journalists, as a quick search of our bylines would likely bring up. We have worked with local, national, and international news teams in a variety of media — and we have the awards to show for it. We would also like to take a moment to point out, as well, that founder David Mikkelson has now been running Snopes.com for more than twenty years, making him less of a blushing upstart and more of someone who has not just dabbled in investigative reporting, but taken an active part in shaping fact-checking into what it is today.

It is true that many of us do not have "formal training" in journalism, if you consider a degree to be formal training. We chose (as many journalists do) to learn our craft through painstaking experience and learned expertise instead, using our educations to deepen and broaden our specialties.

Finally, those appear to be two different men shown purportedly meeting with George Soros. Neither is our chief executive officer and founder, David Mikkelson. He has dark hair, and there the resemblance to the photographs ends.

For the record, the man in the left-hand photograph is Hungarian entrepreneur and former prime minister Gordon Bajnai. We know this because a reverse image search indicates that the photograph was lifted directly from Wikimedia Commons. The man on the right, according to Maarten Schenk of LeadStories.com, is RocketBoom's Andrew Baron, once again using a photograph stolen from Wikimedia Commons without attribution and cropped and distorted slightly, which can confound reverse image searches.

None of us works with or for any political campaign or party, nor have any of us so much as met George Soros and probably wouldn't recognize him if we did.

So, then, why do we do this, if we're across the map politically and have no agenda, either tacit or open, to discredit any part of the political sphere? Is it simply because of our shared years of experience and absolute loathing of disinformation and propaganda? (It is.) If the creators of this meme were making it in good faith they would have asked us, the primary sources, to comment -- just as we would have done for them.