Does This Photograph Show Security Escorting Andrew McCabe Out of the FBI Building?

A photograph showing the former deputy director of the Federal Bureau of Investigation with a group of armed officers is real, but it is not recent and does not show him being thrown or escorted out. 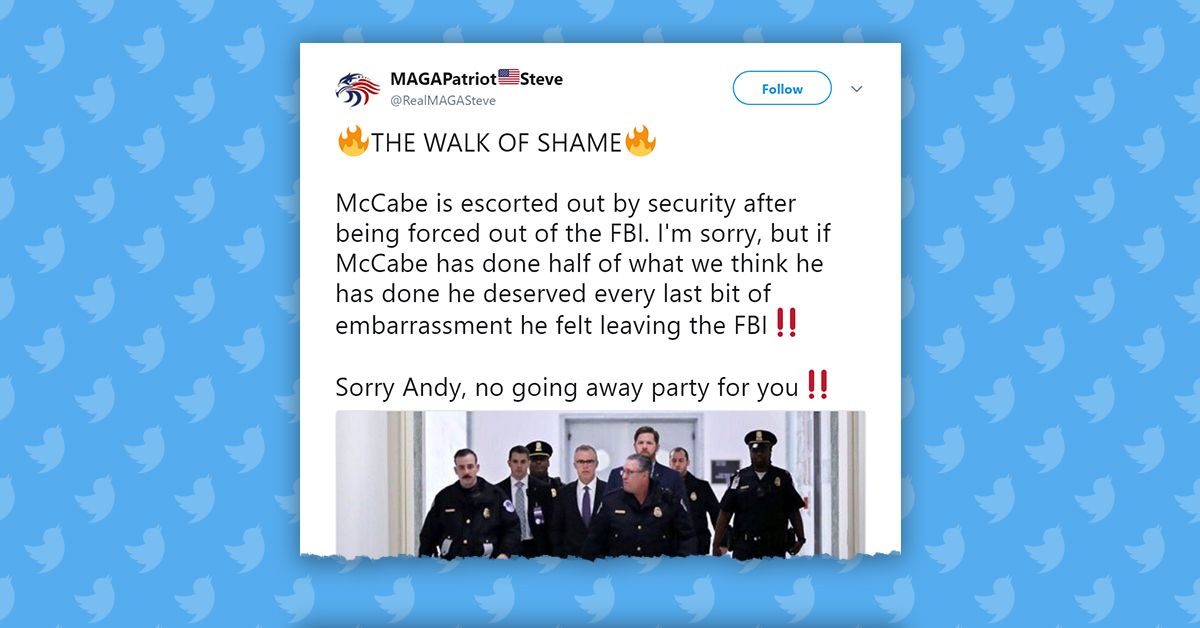 Claim:
A photograph shows former deputy director of the FBI Andrew McCabe being escorted out of the building by security after he left his position in January 2018.
Rating:

On 29 January 2018, shortly after news broke that Andrew McCabe would be stepping down from his position as the deputy director of the Federal Bureau of Investigation, a photograph showing him walking down a hallway surrounded by armed guards appeared with the claim that it showed McCabe doing the "walk of shame" as he was escorted out of the building: The walk of shame.

McCabe is escorted out by security after being forced out of the FBI. I'm sorry, but if McCabe has done half of what we think he has done he deserved every last big of embarrassment he felt leaving the FBI!!

Sorry Andy, no going away party for you!!

This image is real and does show McCabe, but it is also miscaptioned in what looks like a rather ham-handed attempt to make him appear guilty of something: It was not taken in January 2018, and it does not show McCabe being escorted out of the FBI building by security.

The photograph was taken on 21 December 2017 by Getty Images photographer Chip Somodevilla. It shows McCabe making his way through the Rayburn House Office Building on his way to a meeting with various government committees to provide testimony about former FBI Director James Comey, the FBI's investigation on Russia interference in the 2016 election, and Hillary Clinton's use of a private email server:

Federal Bureau of Investigation Deputy Director Andrew McCabe (C) is escorted by U.S. Capitol Police before a meeting with members of the Oversight and Government Reform and Judiciary committees in the Rayburn House Office Building December 21, 2017 in Washington, DC. McCabe testified before the House Intelligence Committee for ten hours on Tuesday.

Andrew McCabe did leave the FBI in January 2018. This photograph, however, is unrelated to his departure.