Was a Marine Told He Can't Fly U.S. and Marine Corps Flags at the Same Time?

A meme circulating on social media is based on a years-old dispute over a retirement community's rules about flags. 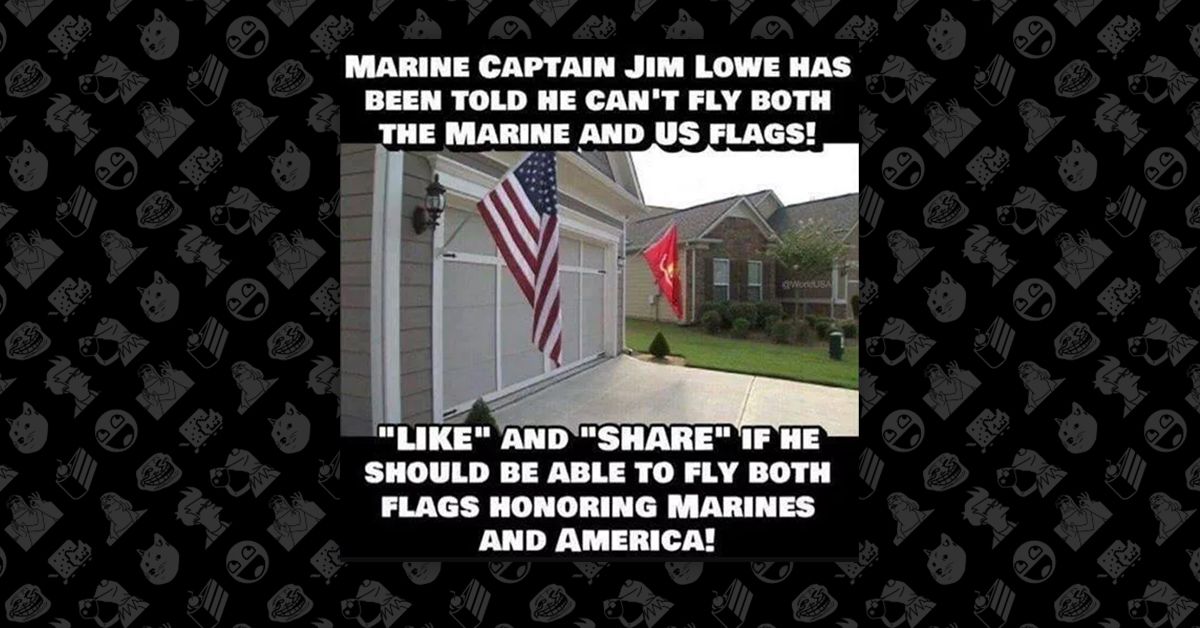 Claim:
Marine Corps Capt. Jim Lowe was told he can't fly both an American flag and Marine Corps colors outside his home.
Rating:

In April 2018, an outrage-instigating meme circulated on Facebook reporting that Jim Lowe, a retired Marine Corps captain, had been forbidden from flying both the American flag and the Marine Corps colors outside his home. The meme instructs users to "like" and "share" if they agree he should be allowed to do so: The meme was pulled from a round of news stories in 2013 that reported a dispute between Lowe, a Vietnam veteran, and the management of his retirement community, Sun City-Peachtree in Griffin, Georgia.

According to local news reports, the dispute over the flags stemmed from Lowe flying both the Stars and Stripes and the Marine Corps colors from the exterior of his home despite a community rule that allowed only one flag. But Lowe had maintained that because Marines refer to their banner as "colors," it shouldn't count as a flag. The homeowners association had threatened to fine Lowe or even place a lien on his house if he didn't comply.

The situation escalated to the point where Lowe threatened to move out of the community, but he never made good on it. According to the local newspaper, The Citizen, Lowe passed away in his Sun City-Peachtree home on 12 September 2016 — but not before the combat veteran was able to "give 'em hell." Local news station WTXF reported that in October 2013, Lowe won the battle to fly both the American flag and Marine Corps colors outside his home.