Was Hillary Clinton Offered a Plea Deal in August 2017?

A single source claimed that Hillary Clinton was offered a plea deal after the Justice Department reopened an investigation into her server. 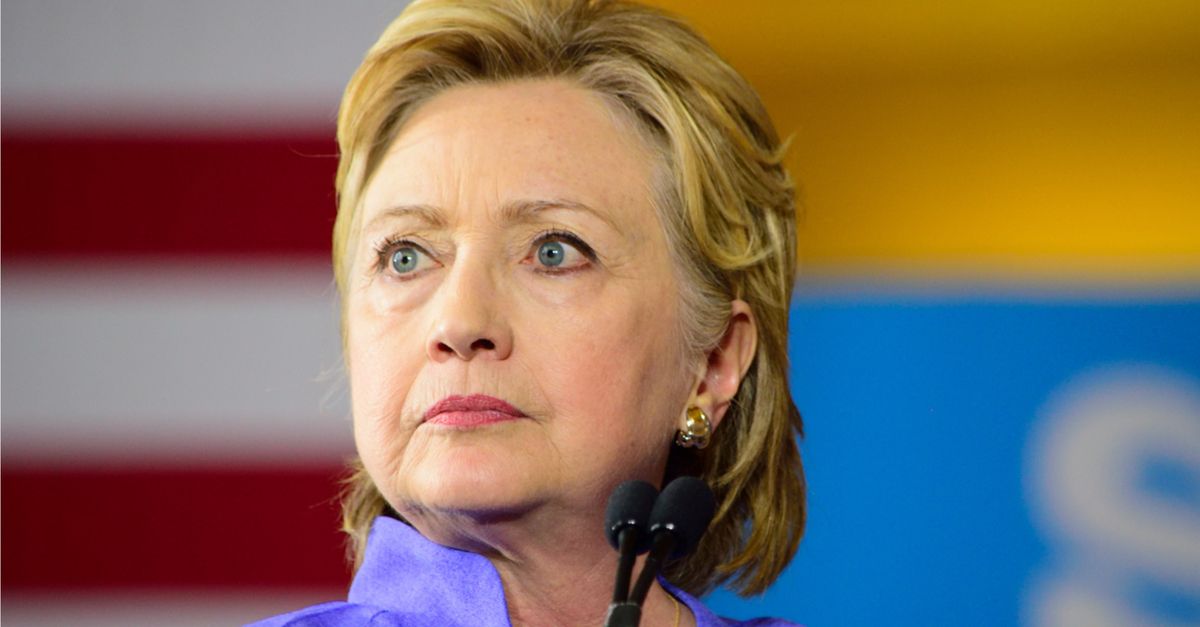 Claim:
The Justice Department offered Hillary Clinton a plea deal in mid-2017 after reopening an investigation into her handling of classified material on a private server.
Rating:

On 8 August 2017, NewsMax author Ed Klein published an article ("Hillary's Plea Bargain") heavily insinuating that Hillary Clinton had been quietly offered a plea bargain due to the Justice Department's belief that the former candidate was prosecutable on "a number of counts."

That claim rested on a solitary anonymous source, purportedly a "Clinton lawyer." That designator was not further qualified or explained, and it seems contradictory that a lawyer purportedly working on Clinton's behalf would leak such a potentially damaging tidbit about his client to the author of several anti-Clinton books.

Klein claimed that "discussion" of a plea took place in July 2017 between the unnamed lawyer and "a high-ranking Justice Department" official:

The Justice Department has reopened the investigation of Hillary Clinton's mishandling of classified material on her private email system while she was secretary of state, and is considering offering her a plea bargain if she will agree to plead guilty to charges of breaking the law, according to a Clinton attorney ... During the exploratory talks with the prosecutor, the Clinton attorney was told that despite former FBI Director James Comey's decision last July not to prosecute Hillary, the Justice Department has reexamined the email case and believes there are ample grounds for prosecuting Hillary on a number of counts.

Under the Justice Department's plea offer, Hillary would be required to sign a document admitting that she committed a prosecutable crime. In return, the DOJ would agree not to bring charges against Hillary in connection with the email probe.

Also as part of the agreement, the Justice Department would not proceed with an investigation of Hillary's pay to play deals with foreign governments and businessmen who contributed to the Clinton Foundation or who paid Bill Clinton exorbitant speaking fees.

The article concluded with a stipulation that the source had "cautioned that normally a plea is offered by a prosecutor only upon arraignment," whereas Clinton had not been charged with any crime. No other news reports we located carried a version of the claim that was not sourced from Klein's article, and his Twitter header suggests that he is perhaps emotionally invested in the prospect of Clinton's theoretical indictment:

On 9 August 2017, The Blaze pointed out a potential discrepancy in Klein's assertions:

Despite doubling down on his remarks about the Clinton investigation, there seemed to be a discrepancy in communication, because after the article was published, he told [“America Talks Live’s” Miranda] Khan that the Department of Justice was “considering” reopening it, not that they had reopened it.

“They are seriously thinking of reopening this investigation and therefore if she doesn’t take the plea agreement, which I agree with you, she almost certainly won’t, I think they will then proceed with this investigation and this is going to drag on for a long time and in a way balance the investigation that’s going on with President Donald Trump and his campaign advisers regarding so-called collusion with the Russians.”

The outlet was far from the first to take issue with Klein's sourcing and attribution. In 2012, Politico reported:

On the other hand, his Clinton book was strewn with serious factual errors, truncated and distorted quotes, and the overall themes don't gibe with any other serious accounts of Clinton's life. The disdain for Klein's previous efforts haven't necessarily broken along political lines.

Curious and revealing. Because if any book in recent memory reads as though it has been written out of greed — a greedy hunger to separate millions of conservative book buyers from their hard-earned 25 bucks — it is Ed Klein's "The Truth About Hillary."

It's June 2005. Hillary Clinton has been a major public figure in the United States for nearly 15 years. Somehow I imagine that if, indeed, she had "embraced" lesbianism "as a revolutionary concept" during her college years — years that have been written about exhaustively — we would have heard about it before now ... We also probably would have heard by now that Bill Clinton learned Hillary was pregnant with Chelsea by reading about it in an Arkansas newspaper. This detail is offered up by a single source — an "investment banker from New York" — in the course of a story about how Bill "raped" Hillary while on vacation in Bermuda in 1979.

Coupled with the claim was a second assertion that Clinton never bothered to inform her husband she was pregnant. In 2005, Klein (in his own words) "dial[ed] back" during an interview about the passage on C-SPAN2, essentially retracting the claim in its entirety:

HOST: OK. Is it true that Bill Clinton found out that his wife was expecting by reading the newspaper?

HOST: Tell us a little bit more about that.

KLEIN: I suspect that Bill Clinton knew that his wife was pregnant since she was pregnant for three months by the time the announcement came out. But it is true that the announcement was not made in the names of Governor and Mrs. Clinton or Governor and Ms. Rodham as she was then known, but was made in her name alone, and that she made the announcement and Bill Clinton said to my source, whom he was speaking to on the phone, "Guess what, you'll never — you'll never believe this, but I'm sitting here reading that Hillary has announced she's pregnant." That's how he found out that she —

HOST: The announcement had been made.

KLEIN: The announcement had been made.

In 2014, The Guardian reviewed a subsequent Clinton book, Blood Feud:

On a sunny afternoon in May last year, we are told, Hillary Clinton gathered six girlfriends from Wellesley's class of 1969 for a boozy lunch at Le Jardin du Roi, a bistro near her home in Chappaqua, New York. Recently liberated from the State Department, Clinton is said to have let loose on her erstwhile boss, accusing President Obama of having “no hand on the fucking tiller”.

Klein discloses breathlessly that “the wines had been carefully chosen by Roi, the owner of the restaurant,” and that “Roi waited on Hillary personally and prepared a special vegan dish for her after the former first lady told him that she was trying to lose weight.”

There is, however, a problem with this centrepiece of Blood Feud’s prologue. Le Jardin du Roi was not named after the backyard of a man called Roi. It means “The Garden of the King”, or “The King’s Garden” in French. “It’s just the name of the restaurant,” a puzzled staff member told the Guardian when reached by telephone. The name of the man who owns the restaurant is Joe.

This is not the first glaring factual error to have made its way into Klein’s reporting. It is not even the first time a mistake has been made in the very first anecdote of one of his books ... Two publishing industry sources familiar with the situation confirmed a report by BuzzFeed [in 2014] that Blood Feud had been dropped by its original publisher, William Morrow, because the content did not pass a vetting by in-house lawyers. “When you’re at an imprint of HarperCollins, which is part of NewsCorp, they take that stuff very seriously, and they check all of your sources and notes and they want to know where you got stuff,” said one.

Klein's suggestion that Hillary Clinton was to be indicted and had already been offered a plea deal quickly travelled through hyperpartisan corners of the Internet, but a number of criticisms of Klein's relationships with facts and sources have dogged his work from at least 2005, with numerous prominent conservative journalists among his most vocal critics.