Rumors about a return of the popular, long-running comedy cartoon have been repeatedly shot down by people involved with the show. 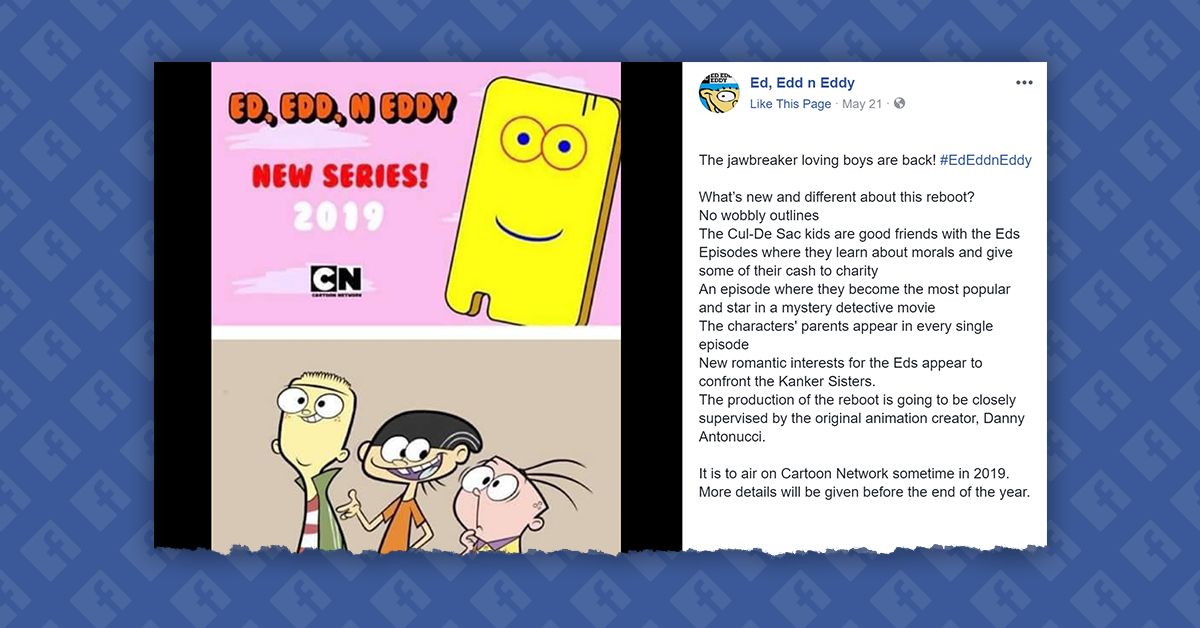 Claim:
Cartoon Network announced in May 2018 that they were rebooting the comedy series "Ed, Edd n Eddy."
Rating:

On 21 May 2018, the "Three Eds" Facebook page, a fan page for the popular cartoon but not an official source of news, posted a message claiming that Cartoon Network had officially announced that a reboot of its popular, long-running series Ed, Edd n Eddy would air on the channel sometime in 2019: The jawbreaker loving boys are back! #EdEddnEddy

What’s new and different about this reboot?
No wobbly outlines
The Cul-De Sac kids are good friends with the Eds
Episodes where they learn about morals and give some of their cash to charity
An episode where they become the most popular and star in a mystery detective movie
The characters' parents appear in every single episode
New romantic interests for the Eds appear to confront the Kanker Sisters.
The production of the reboot is going to be closely supervised by the original animation creator, Danny Antonucci.

It is to air on Cartoon Network sometime in 2019. More details will be given before the end of the year.

With reboots of popular television shows such as Roseanne, The X-Files, Will & Grace, and Twin Peaks, it seemed plausible that Cartoon Network would announce the return of the popular cartoon series Ed, Edd n Eddy.

It appears that the rumor started with a 2016 Tumblr post that proposed a series of ideas for a reboot. A second Tumblr user responded with an image purportedly showing "top secret concept art" for the new series: Although some users realized that this was a joke (most likely mocking the animation of other rebooted cartoons such as The Powerpuff Girls), others were convinced that this show was truly in the works.

Unfortunately for fans, that is not the case. Erin Fitzgerald, the voice of May Kanker and Naz on the show, rebuffed the rumor when it first circulated in 2017: It is always possible, although not very probable, that everyone involved in the show may change their mind and return to the popular series. Until then, fans will have to content themselves with reruns.