Did the 1938 Radio Broadcast of 'War of the Worlds' Cause a Nationwide Panic?

Accounts conflict about how terrified Americans really were by Orson Welles' infamous 1938 "War of the Worlds" Halloween broadcast. 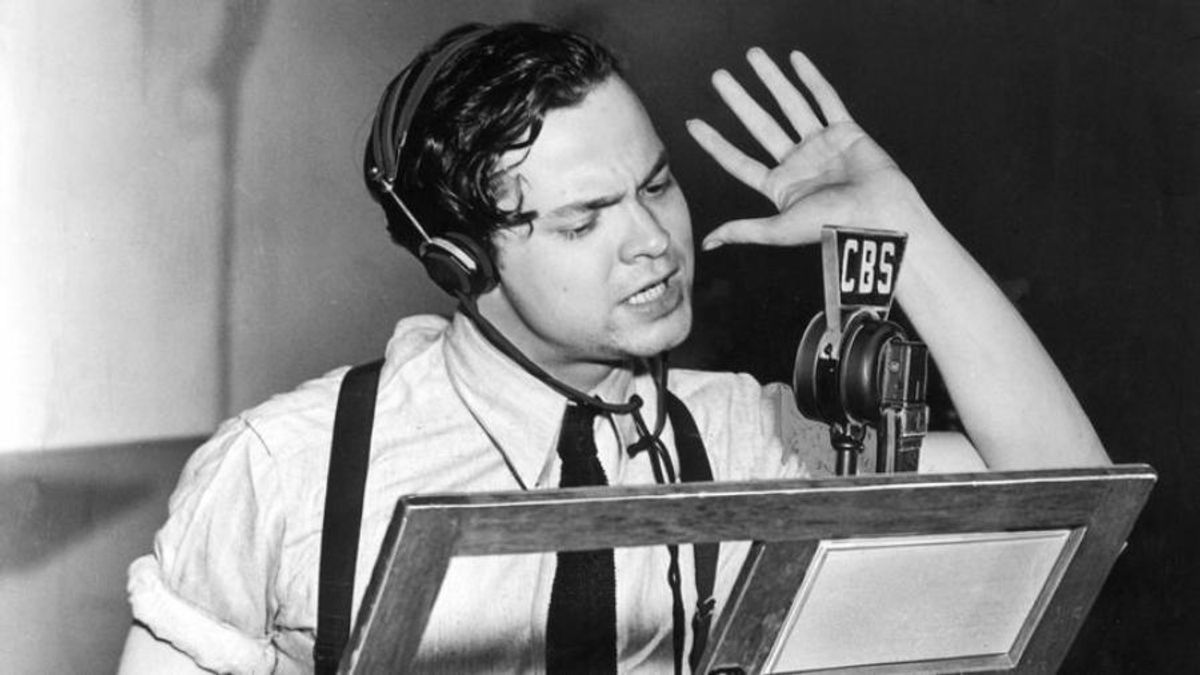 Claim:
Orson Welles' 30 October 1938 radio adaptation of "The War of the Worlds" caused mass hysteria, convincing thousands of panicked listeners across North America that Earth was being attacked by Mars.
Rating:

Of the countless adaptations made of H.G. Wells' 1897 science fiction classic The War of the Worlds over the past century, the one that remains most talked and written about to this day was Orson Welles' live radio broadcast on 30 October 1938. It boasted a distinctly modern twist. Keen on cementing his reputation as a theatrical wunderkind (Welles was on the cover of Time magazine only months earlier), the 23-year-old actor-director reworked the plodding Victorian narrative about a Martian invasion of Earth into a gripping faux newscast with real moments of shock and awe.

(Contrary to common nomenclature, Welles' "War of the Worlds" broadcast was not a "hoax" sprung on an unsuspecting audience. Rather, the show was a regularly scheduled and announced episode of The Mercury Theatre on the Air, a radio program dedicated to presenting dramatizations of literary works.)

A brief excerpt from the script by Howard Koch shows why Welles' hour-long production of The War of the Worlds is justly regarded as a mini-masterpiece of horror:

ANNOUNCER: We are bringing you an eyewitness account of what's happening on the Wilmuth farm, Grovers Mill, New Jersey. (MORE PIANO) We now return you to Carl Phillips at Grovers Mill.

PHILLIPS: Ladies and gentlemen (Am I on?). Ladies and gentlemen, here I am, back of a stone wall that adjoins Mr. Wilmuth's garden. From here I get a sweep of the whole scene. I'll give you every detail as long as I can talk. As long as I can see. More state police have arrived They're drawing up a cordon in front of the pit, about thirty of them. No need to push the crowd back now. They're willing to keep their distance. The captain is conferring with someone. We can't quite see who. Oh yes, I believe it's Professor Pierson. Yes, it is. Now they've parted. The Professor moves around one side, studying the object, while the captain and two policemen advance with something in their hands. I can see it now. It's a white handkerchief tied to a pole . . . a flag of truce. If those creatures know what that means . . . what anything means!. . . Wait! Something's happening!

(HISSING SOUND FOLLOWED BY A HUMMING THAT INCREASES IN INTENSITY)

PHILLIPS: A humped shape is rising out of the pit. I can make out a small beam of light against a mirror. What's that? There's a jet of flame springing from the mirror, and it leaps right at the advancing men. It strikes them head on! Good Lord, they're turning into flame!

PHILLIPS: Now the whole field's caught fire. (EXPLOSION) The woods . . . the barns . . . the gas tanks of automobiles . . . it's spreading everywhere. It's coming this way. About twenty yards to my right . . .

(CRASH OF MICROPHONE ... THEN DEAD SILENCE)

The broadcast was legendary overnight for supposedly having been too realistic and frightening for its audience. Morning papers from coast to coast reveled in the "mass hysteria" it had caused — even the staid New York Times, whose front-page headline blared, "Radio Listeners in Panic, Taking War Drama as Fact":

A wave of mass hysteria seized thousands of radio listeners between 8:15 and 9:30 o'clock last night when a broadcast of a dramatization of H. G. Wells's fantasy, "The War of the Worlds," led thousands to believe that an interplanetary conflict had started with invading Martians spreading wide death and destruction in New Jersey and New York.

The broadcast, which disrupted households, interrupted religious services, created traffic jams and clogged communications systems, was made by Orson Welles, who as the radio character, "The Shadow," used to give "the creeps" to countless child listeners. This time at least a score of adults required medical treatment for shock and hysteria.

In Newark, in a single block at Heddon Terrace and Hawthorne Avenue, more than twenty families rushed out of their houses with wet handkerchiefs and towels over their faces to flee from what they believed was to be a gas raid. Some began moving household furniture.

Throughout New York families left their homes, some to flee to near-by parks. Thousands of persons called the police, newspapers and radio stations here and in other cities of the United States and Canada seeking advice on protective measures against the raids.

In Providence, Rhode Island, "weeping and hysterical women" swamped the Providence Journal with calls asking for more details of the "massacre."

In Pittsburgh, Associated Press reported, a man returned home in the middle of the broadcast and found his wife with a bottle of poison in her hand, saying, "I'd rather die this way than like that."

In San Francisco, police fielded hundreds of calls from frightened listeners, including one man who wanted to volunteer to help fight the Martian invaders. When Orson Welles was asked to comment on the hysteria he was blamed for causing, he was incredulous. "We've been putting on all sorts of things from the most realistic situations to the wildest fantasy, but nobody ever bothered to get serious about them before," he was quoted as saying. "We just can't understand why this should have such an amazing reaction. It's too bad that so many people got excited, but after all, we kept reminding them that it wasn't really true."

WABC, which aired the program in New York, issued this statement one hour after the broadcast ended:

For those listeners who tuned in to Orson Welles' Mercury Theatre on the Air broadcast from 8 to 9 p.m. tonight, and did not realize that the program was merely a radio adaptation of H.G. Wells' famous novel, "War of the Worlds," we are repeating the fact, which was made clear four times on the program, that the entire content of the play was entirely fictitious.

How real was the 'panic'?

For decades, the conventional wisdom based on the sensationalized reporting of the time was that the Mercury Theatre broadcast had indeed spread mass hysteria from one end of the country to the other. By the 2000s, however, sociologists and historians were questioning the true severity of "the War of the Worlds panic." W. Joseph Campbell, an American University professor of communication studies, observed in 2010 that the contemporaneous news coverage was "almost entirely anecdotal and largely based on sketch wire service roundups that emphasized breadth over in-depth detail":

In short, the notion that the War of the Worlds program sent untold thousands of people into the streets in panic is a media-driven myth that offers a deceptive message about the power radio wielded over listeners in its early days and, more broadly, about the media's potential to sow fright, panic, and alarm.

Such data as exist about the listening audience that night support Campbell's thesis. The C.E. Hooper ratings service reported that only 2 percent of national respondents were tuned into Welles' broadcast on 30 October 1938. The rest were either listening to something else (most likely ventriloquist Edgar Bergen’s Chase and Sanborn Hour, one of the most popular programs on radio), or nothing at all. Based on the network's own audience survey, CBS executive Frank Stanton concluded that most Americans didn't hear the show. “But those who did hear it," he added, "looked at it as a prank and accepted it that way.”

Recapping the event on its 75th anniversary in Slate, media historians Jefferson Pooley and Michael J. Socolow pointed out that few, if any, of the anecdotal reports of hysterical reactions to the program were ever investigated and confirmed:

Wire service reports did relay sensational stories of (unnamed) panicked listeners saved only by the timely intervention of friends or neighbors, but not one newspaper reported a verified suicide connected to the broadcast. Researchers in Princeton’s Office of Radio Research, working under the direction of Cantril, sought to verify a rumor that several people were treated for shock at St. Michael’s Hospital in Newark, N.J. The rumor was checked and found to be inaccurate. When the same researchers surveyed six New York City hospitals six weeks after the broadcast, “none of them had any record of any cases brought in specifically on account of the broadcast.” No specific death has ever been conclusively attributed to the drama. The Washington Post reported that one Baltimore listener died of a heart attack during the show, but unfortunately no one followed up to confirm the story or provide corroborative details. One particularly frightened listener did sue CBS for $50,000, claiming the network caused her “nervous shock.” Her lawsuit was quickly dismissed.

In addition to overblown press coverage, another reason the event went down in history as an instance of "mass hysteria" was the publication of a book in 1940 called The Invasion from Mars. Written by Princeton psychology professor Hadley Cantril, the book purported to explain the War of the Worlds "panic" in sociological terms but suffered from being overly reliant on a skewed report hastily compiled six weeks after the broadcast. On the basis of the report, which Jefferson and Socolow say was "tainted by the sensationalistic newspaper publicity," Cantril estimated that one million listeners had been "frightened" by the show — an impossible number, based on every other known measure of the size of the listening audience. "Worse," Jefferson and Socolow wrote, "Cantril committed an obvious categorical error by conflating being 'frightened,' 'disturbed,' or 'excited' by the program with being 'panicked.'"

Was a small percentage of listeners frightened — and a few even panicked, perhaps — by The War of the Worlds on the night of the broadcast? Clearly, yes. Many of those, it was determined afterwards, had tuned in late and missed obvious clues that it was fiction (and a large percentage of those assumed the U.S. was under attack by Germany, not Mars). But was it an instance of mass hysteria overtaking tens of thousands of people throughout the U.S.? The evidence shows otherwise.