Did the #WalkAway Campaign Use Stock Photographs for People It Claimed Left the Democratic Party?

The founder of a viral political campaign claims memes featuring stock photo models instead of real people were not produced by the WalkAway Campaign. 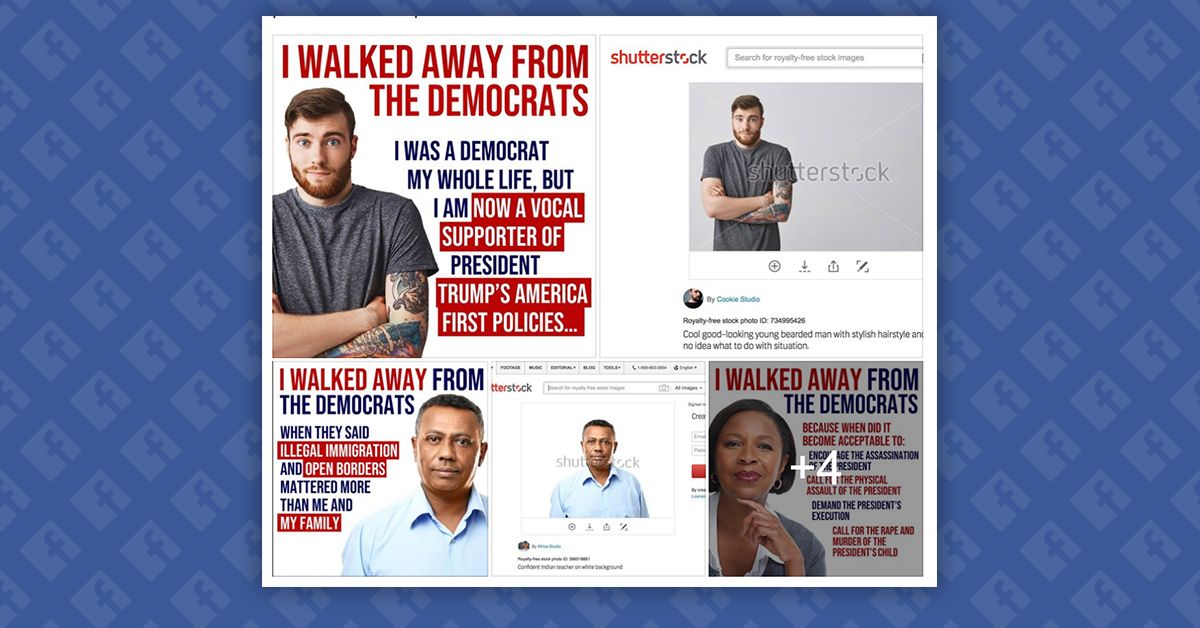 The founder of the #WalkAway campaign said those memes were not created by the campaign.

Whether the person or persons who generated the memes is associated with the WalkAway Campaign.

In July 2018, various websites reported that the social media hashtag #WalkAway represented a mass movement of people leaving (i.e., "walking away" from) the Democratic party. The #WalkAway movement was characterized as an answer to the "blue wave," a belief shared by liberals that Democrats were poised to make major electoral gains in November 2018 midterm elections.

The campaign was launched by New York resident Brandon Straka, who in mid-June 2018 created a video replete with dramatic theme music in which he presented himself as a former liberal who was "walking away" because liberal politics no longer embodied his values of "unity, personal empowerment and love." The video was widely shared on social media, but as Abby Ohlheiser, who pens a blog about the Internet for the Washington Post noted, that following took place "almost exclusively on the right-wing Internet."

In late July 2018 however, the #WalkAway campaign was criticized for sharing memes utilizing photographs of liberals who were purportedly personally testifying to "walking away" from the Democratic Party, but those memes actually employed commercial images of anonymous people provided by the stock photography site Shutterstock:

They were actually models in royalty-free stock photos. pic.twitter.com/FjfpZzv8mN

Straka took to Twitter to say the memes were not authentic #WalkAway campaign material:

In an email, Straka told us he didn't know who created the memes, but that any official material from the #WalkAway campaign would bear specific branding:

I don’t know who created the memes. I first saw them within the last week. Anything officially released by the #WalkAway Campaign will bear our “branding” and trademark. Many people are excited and energized about #WalkAway, and in this excitement have created their own materials which are not approved or condoned by the official #WalkAway Campaign.

It's unclear who created the memes, or whether they were shared by people who consider themselves associated with the #WalkAway hashtag movement. But verifying what materials and persons might have any "official" connection with the movement is difficult since the campaign exists mostly on social media, with Straka self-identifying in his social media profile as "campaign founder" and in a group hosted by him on Facebook.

#WalkAway memes employing stock photographic images have been shared by at least one prominent conservative figure — Ginni Thomas, an attorney who contributes to the conservative Daily Caller website and is married to U.S. Supreme Court Justice Clarence Thomas: Noting that live Twitter tracking tool Hamilton68 (operated by the Alliance for Securing Democracy at the German Marshall Fund) had recorded Russian bots and trolls helping to amplify the #WalkAway hashtag, some critics blamed Twitter for failing to quell the spread of Russian propaganda:

Walk Away is a scam created by Russian bots. In reality, I have never met a liberal who says, "You know what, I've decided I hate people and their basic human rights. I think I'll become a Republican." https://t.co/lb2VCeOVcm

Ohlheiser, Abby.  "The #WalkAway Meme Is What Happens When Everything Is Viral and Nothing Matters."     The Washington Post.   2 July 2018.

This article was updated to include comment from Straka.