Are Women Using Vodka Tampons to Get Drunk? 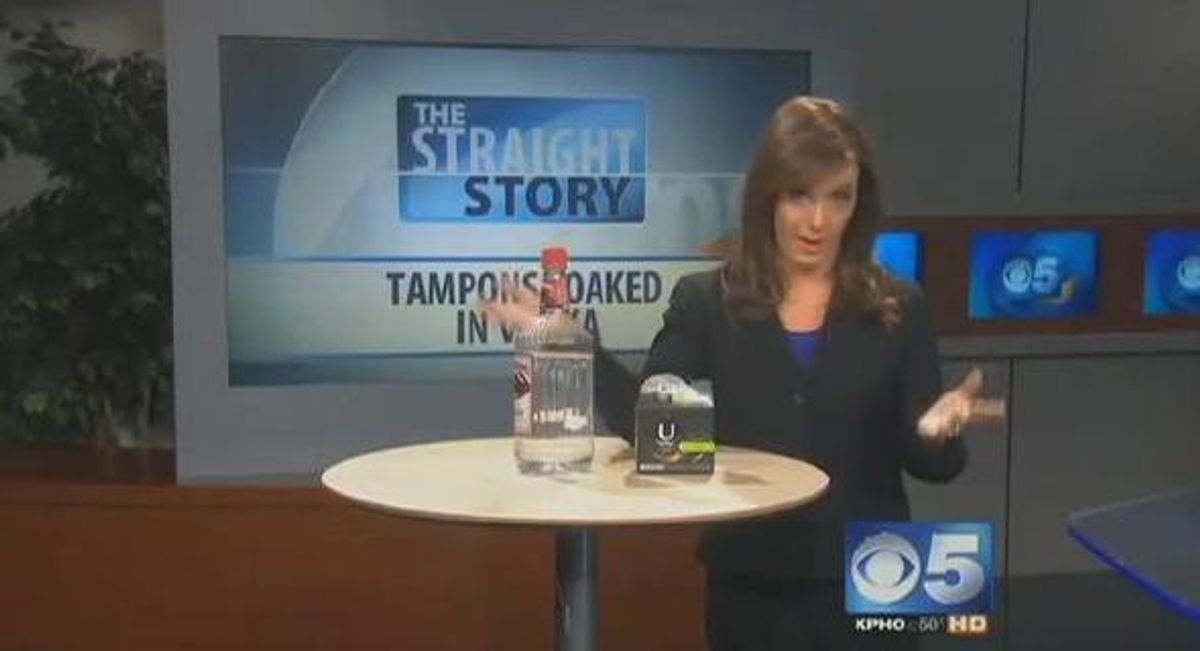 Claim:
Young women are inserting vodka-soaked tampons as a furtive way of getting drunk.
Rating:

Although whispers about young women trying to furtively get their alcohol buzzes on by inserting vodka-soaked tampons into themselves have existed for more than fifteen years (our oldest printed reference dates to 1999, but the rumor is likely a fair bit older than that), cases documenting instances of women actually engaging in such a practice are rare to non-existent and well short of proving it to be the widespread phenomenon rumor makes it out to be. Nonetheless, as with so many other stories about supposedly worrisome teen crazes, news outlets periodically run stories proclaiming insertion of "vodka tampons" to be a real and common activity, stories based on little or nothing more than mere repetition of rumor (e.g., "We've heard teens are doing this").

Arguing strongly against such rumors is the nature of tampons themselves. While these cylindrical compacted wads of cotton and/or rayon do soak up liquid readily (which is their purpose, after all), they also become nigh on impossible to insert into any bodily orifice when they are in such a saturated state.

Also, as blog editor Danielle Crittenden discovered when she experimented with the procedure, putting vodka into direct contact with vaginal membranes hurts like the dickens, with the pain not retreating after a few moments of discomfort but rather continuing unabated for as long as the liquor is present (and indeed well after).

Crittenden's research also showed even a "super-plus" tampon could absorb only of vodka, with a half ounce of that having to be wrung from it prior to insertion. The amount of alcohol therefore available to provide a buzz to thrill-seeking teens would be akin to that found in one typical mixed drink, a tipple hardly worth going to the trouble of inserting a vodka-soaked tampon into one's nether regions even if the procedure were pain-free and could be showed to work.

As to why anyone would want to ingest alcohol in this fashion, three reasons are given for the purported practice: To do away with the problem of the smell of booze on one's breath, to bypass the stomach and thus more quickly benefit from the full effect of the hooch, and to eliminate the sort of gastric distress that leaves a heavy imbiber clutching the porcelain god at

The most commonly-given reason, the avoidance of bowery breath, has the least going for it. If one were to ingest vodka vaginally (or anally, as the rumor is also expressed that way), the practice wouldn't result in booze-free breath because alcohol is partially expelled from the body via the lungs. Once liquor is in the blood, at least some of it gets breathed out, which is how breathalyzers measure blood alcohol content.

Also, the rumor's lynchpin, that as long as a teen gal has sweet breath her parents won't know their little darling has been tippling, isn't all that practical. It's not easy to conceal being three sheets to the wind; drunken behavior often gives the game away long before the stink of booze does. Any teen who thinks avoiding parental detection is nothing but a matter of masking or eliminating the scent is probably in for a rude surprise.

Even if putting liquor into direct contact with the mucus membranes of the vagina or rectum worked to speed alcohol into the bloodstream, the practice might come at a cost. Such membranes are sensitive, and the potential burning discomfort of flooding those areas with John Barleycorn's finest could prove memorable and not nearly adequately compensate for having advanced one's inebriation by a matter of minutes.

Some claim taking in vodka through the insertion of liquor-soaked tampons might (and we're not going to test this theory, so we'll leave it at "might") work to keep one's dinner in place during a fierce night of partying, citing the notion it avoids the presence of large amounts of alcohol into the stomach, a presence that works to irritate the lining of that organ and thus prompt regurgitation of its contents. (However, vomiting is one of the body's defense mechanisms against poisoning, so suppressing or avoiding that function is not generally a good idea. In 2005, for example, a woman was charged with negligent homicide for administering a sherry enema that caused the death of her husband from alcohol poisoning.) Another putative reason given for imbibing in this manner is bypassing the stomach avoids the calories associated with alcohol consumption.

The rumor has become particularly attached to the Scottish rock band Mogwai. According to lore, while trapped in a European tour environment where hooch was hard to come by, the band members soaked tampons in vodka and inserted them into their rectal cavities in order to facilitate the swift and efficient entry of the small available stock of alcohol into their bloodstreams. The group maintains they never did this, and the belief they did arose from an innocent conversation with a journalist in which mere discussion of the practice was subsequently misremembered by that reporter as the group's having claimed to have participated in the activity themselves.

Sightings:   Vodka-soaked tampons were referenced in an episode of the television crime drama CSI ("Two and a Half Deaths," original air date 2008). Also, in the TV series The Girlfriends' Guide to Divorce ("Rule No. 67: Don't Kill the Princess," original air date 13 January 2015), Lilly's14th birthday party is enlivened by the sudden cascade of her friends into the pool after vodka-soaked tampons have caused severe sensations of burning and stinging in the nether regions of the young partygoers.