Scarelore about purported lead levels in vintage Pyrex does not jibe with the popular brand's documented history or the timing of FDA oversight. 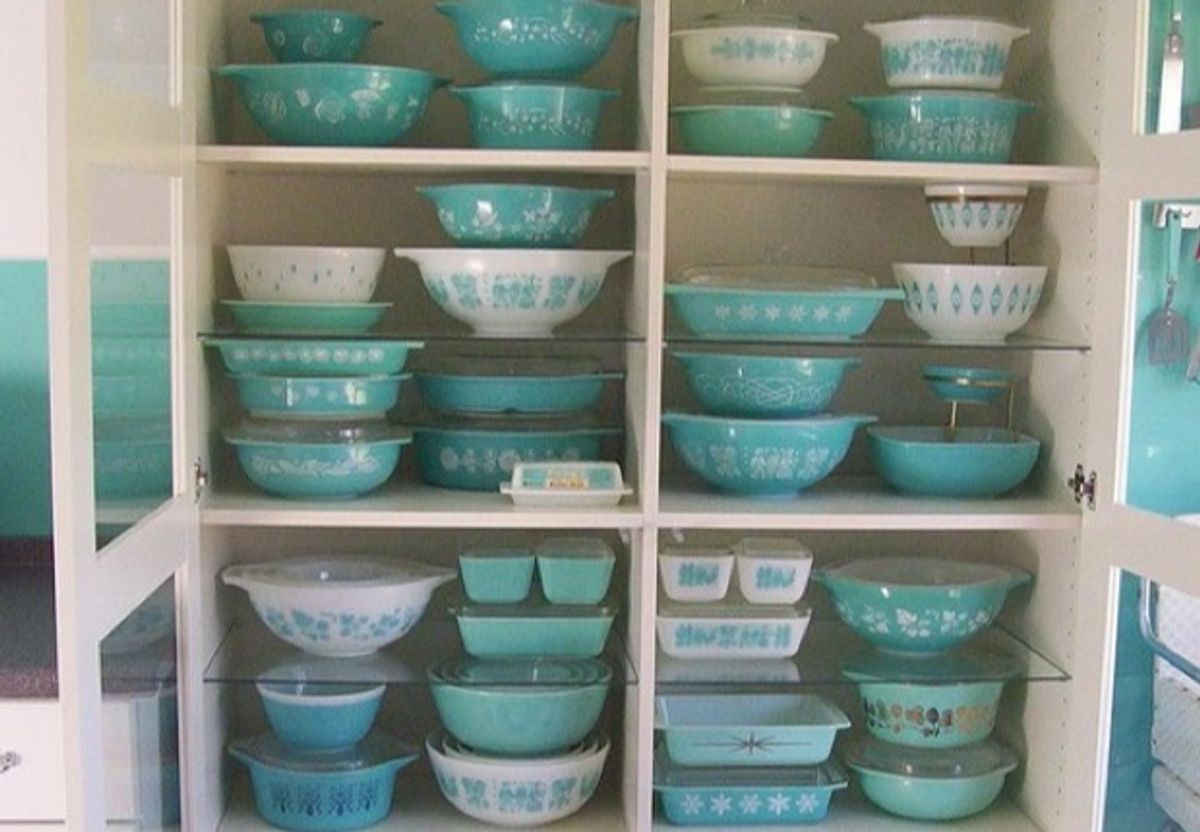 On 30 November 2016, the Facebook page "Punk Rock Homesteading" shared a report that vintage Pyrex dishes contain unsafe levels of lead. The linked article was published by Creative Green Living in October 2015, and strongly discouraged the use of vintage Pyrex due to a purported issue with high lead content. (Pyrex had previously been the subject of rumors about spontaneous shattering thanks to manufacturing cuts.)

The piece reported that lead could contaminate food from both in and outside the popular dishes (often heirlooms), citing a documentary about a "secret epidemic" of lead in household items:

Tamara Rubin, the director and producer of the forthcoming documentary, MisLEAD: America's Secret Epidemic is also the director of the Lead Safe America Foundation. She frequently tests items that are brought into their headquarters in Portland, OR. In the Facebook post that ignited a firestorm, she shows an image of a 3M Lead Check Swab after being used to test the outside of a Pyrex bowl.

The milk glass interiors, classic to most vintage Pyrex and Anchor Hocking pieces, commonly contain lead as well. The lead in milk glass is probably inert, however, no lab tests are currently being done on these vintage pieces. It is also probable that using the glass with highly acidic foods or using glass that is scratched may release some of the lead contained in the glass. The problem is that you won't know once you've reached the point where your bowl or dish is leaching lead.

The author lamented that she could not in good conscience tell readers their vintage Pyrex was still safe to use, listing off the myriad ways in which lead could purportedly come into contact with food, and implying that vintage Pyrex differs from its modern counterpart:

People insisted that since food doesn't come in contact with the outside of the bowls, these tests do nothing more than drum up fear.

The problem is, that if lead is coming off onto a Lead Check Swab, that means it IS rubbing off - in small, even microscopic (but still dangerous) amounts - and it becomes available to be transferred to your mouth, eyes, or even your child's food or body.

The source of most social media claims appeared to be the Tamara Rubin documentary about childhood lead poisoning.

In a 19 June 2014 Facebook post, the documentary's page shared purported lead testing results for a Pyrex casserole from the "Spring Blossom" collection. The post had no information about testing methodology:

Vintage Pyrex casserole pot (y'all have been asking about this for a long time! It's the newest addition to my collection of toxic stuff!!!) drumroll please: white glass: 175 ppm lead, green paint: 61,900 ppm lead, white floral design; 110,000 ppm lead. Please share this one & if you appreciate what I do - pretty please consider making a tax-deductible donation to help me continue to help families everywhere. No lead is safe, we shouldn't have lead in our cookware. Ikea has lead-free dishes and cookware (& they don't pay me to tell you that!) our donate button: https://www.leadsafeamerica.org - Each $5 raised helps us to help at least one family. Thank you!

Rubin's claims about lurking lead dangers did not revolve solely around Pyrex. In an April 2015 interview, Rubin shared more stories about lead lurking in innocuous items:

For my readers, the biggest “surprises” were the Beatrix Potter Benjamin Bunny Wedgewood China baby cups – which tested between 20,000 and 75,000 parts per million lead (baby cups, for Pete’s sake!); and then of course, readers have been outraged by the vintage Pyrex – which has tested positive with levels as high as 200,000 ppm lead and higher.

That said, my biggest “surprise” was a nurse’s stethoscope – purchased new, this past year (at the time that I tested it); it was way over the limit of what was considered safe for lead (with safety limits only set in place for items intended for use by children)- and really… how many times has a parent been at a doctor’s office or at the hospital and the nurse or doctor gave the baby a stethoscope to play with? And one of the first things the kid does…is put it in their mouth… right?

The claims appeared to originate with a single individual (Rubin) testing vintage Pyrex for lead in a non-laboratory environment and using undisclosed methods. Other people attempted to test their own pieces; one owner of vintage Pyrex in the "Butterprint" pattern discovered different results:

A search for definitive answers about lead in vintage Pyrex originating from any source other from Rubin was difficult. A since-deleted page created by Pyrex provided a clue as to whether older Pyrex presented a new risk. According to the archived FAQ:

A representative for Pyrex confirmed to us that their manufacturing standards had not changed in the preceding six decades, suggesting that if high levels of lead were present in vintage Pyrex, there was no reason why they would not also be present in modern Pyrex. (However, panics over lead in Pyrex targeted only the prized vintage patterns.)

Another answer came from a Smithsonian piece on the safety of vintage wares in general, in which a Food and Drug Administration representative was quoted on the general safety of such items:

First, as a bit of background, FDA established and began enforcing limits on leachable lead in tableware 40 years [prior to 2009, around 1971]. Obviously, any ware, Fiestaware or otherwise, manufactured prior to that era was not subject to FDA limits, because they didn't exist. This doesn't necessarily mean that old ware is unsafe, but consumers who are concerned about such a possibility can use home lead test kits (available in hardware stores) to screen old ware to determine whether it may leach high levels of lead into food.

We do not recommend not using old ware unless it shows signs of deterioration such as cracking or pitting of the glaze. This could be a sign that the glaze is disintegrating and could allow lead to leach into food. In addition to using a home test kit, consumers who want to be cautious might choose to avoid storing foods in older holloware (bowls), consuming hot and acidic liquid beverages such as coffee or tea out of cups, and heating bowls, cups and plates in the microwave. Again, these are qualified recommendations; the ware is not necessarily unsafe because it is old, but it may not comply with current FDA standards.

The Facebook post embedded above specifically "tested" a casserole from Pyrex's "Spring Blossom" (or "Spring Blossom Green") collection, introduced in 1972. All dishes of that vintage Pyrex pattern were manufactured after the FDA's enforcement of leachable lead levels for cookware in 1971. The "Butterprint" pattern tested in the video above was manufactured between 1957 and 1968, but Pyrex did not appear to have changed their product composition in that timeframe. We could find no evidence in Pyrex's well-documented history that the FDA's updated standards for lead in cookware altered the standing composition or manufacture of the product in any way.

A 2010 paper on the history of Pyrex acknowledged the presence of lead in a predecessor known as "Nonex," adding that lead was formulated out during the development of Pyrex between 1913 and 1915:

In 1915, Corning Glass introduced the first glass ovenware, made of a new, clear, heat-resistant material, Pyrex®. Its cooking potential was discovered in 1913 by Dr. Jesse T. Littleton of Corning when he provided his wife, Becky, with a makeshift casserole out of a cut-down Nonex battery jar. Surprisingly, it survived the oven as well as traditional ceramic casseroles. After Corning revised the original Nonex formula to remove the lead (dangerous in food products), the ovenware was successfully tested by Sarah Tyson Rorer, Director of the Philadelphia Cooking School and culinary editor of the Ladies Home Journal.

We were unable to locate any other information substantiating the claim that vintage Pyrex contained any worrisome levels of lead. All information we could find indicated that the method of production has stayed consistent for 60 years. The FDA began enforcing limits on leachable lead in 1971, and a vintage Pyrex pattern commonly targeted as purportedly high in lead content didn't even go into production until 1972, after all manufacturers were subject to the FDA's new leachable lead standards.