Is This Video of a 'Globular Bolt' Real?

Scientists are still trying to figure out so-called "ball lightning." 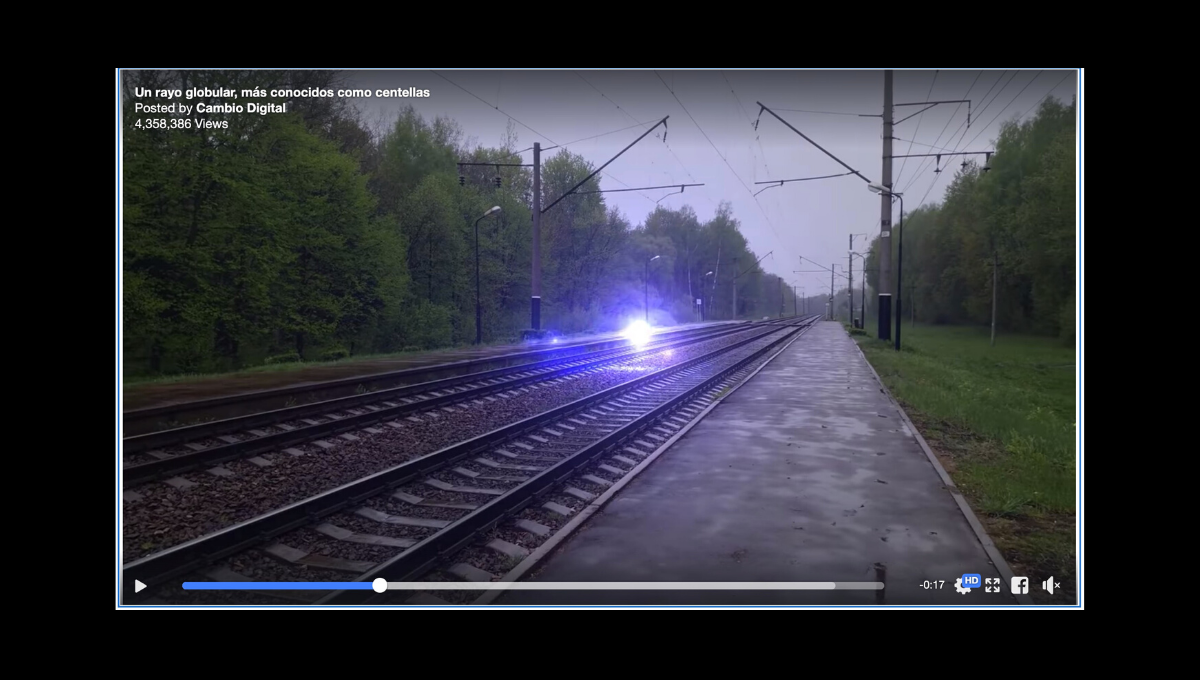 Claim:
A video documents a rare "globular bolt," or "sphere lightning," as it crosses a train track.
Rating:

A video supposedly showing a rare, natural phenomenon known as a "gobular bolt," or "ball lightning," went viral in January 2020 with a posting on the Facebook page Cambio Digital that quickly racked up more than 4 million views:

This video was frequently circulated with the caption: "This is a globular bolt, better known as scintillation. They are tremendously rare and peculiar."

This video, however, does not show a "globular bolt," a "scintillation," "ball lightning," or "sphere lightning." The video actually features a computer generated image.

The video was created by Andrei Trukhonovets. It was posted to his YouTube page back in May 2019, along with a note stating that the footage featured "CGI." Trukhonovets also responded to a number of comments and bemoaned the fact that this video was circulating as if it showed a genuine ball of lightning:

I'm surprised how many people believe in miracles. It's time for Morgan Freeman to go out from the dusk and sort things out.

Just to be clear: I don't consider ball lightning is a miracle. I see these comments all over the internet and I see also what people write after they realize it's made with a computer. In my opinion this negative reaction proceeds mainly from disappointment. This video was created when I just started to learn computer graphics thus it has a lot of mistakes here and there and I think if someone can look attentively that mistakes are clearly visible. By way of conclusion, just don't learn physics at school and your life will be full of magic and miracles.

Here's the original video created by Andrei Trukhonovets. This footage was also shared to Trukhonovets' Instagram page along with the tags #vfx #aftereffects #lightning #cgi #oc.

While this video clearly doesn't show an actual "globular bolt," scientists have been investigating the phenomenon, sometimes referred to as "sphere lightning," for more than a century. In 1901, an illustration of l'eclair en boule, or a ball of lightning, appeared in the French science book "La nature: revue des sciences et de leurs applications aux arts et à l'industrie" ("Nature: review of sciences and their applications to arts and industry"), where it was described as "one of the most curious manifestations of electricity." Numerous reports of ball lightning over the last century exist, but scientists have not completely wrapped their heads around this bizarre, natural phenomena. One theory, offered in the July 2019 issue of the journal "Optik," holds that ball lightning is actually light trapped inside a thin bubble of air:

Ball lightning is one of the best-known natural phenomena that few have seen. Until recent years, most scientists remained skeptical about ball lightning; it seemed more myth than reality. Nowadays, ball lightning’s street cred among scientists is stronger, but it’s still the case that most of the images you see online purporting to be ball lightning are just over-exposed images of ordinary lightning. In fact, no expert we asked could point us to an actual image of ball lightning in nature. What is ball lightning? Since the time of the early Greeks, there’ve been reports of small balls of bright plasma-like light moving over the ground and then vanishing. The explanation still eludes scientists for the most part, although various explanations have now been offered. And now there is a potential new answer, based on previous research, to this baffling mystery.

The research has been published in a new peer-reviewed paper in the July 2019 issue of the journal Optik by Vladimir Torchigin from the Russian Academy of Sciences.

As the name suggests, ball lightning has often been thought of as a form of lightning. That might not actually be the case, however; it might not be true lightning. A previously proposed hypothesis by Torchigin had suggested that these weird orbs are simply light trapped inside a sphere of thin air. The new paper now expands on that idea and proposes physical parameters for how these things might exist.

In short, whatever ball lightning is, it is not depicted in this viral video.