Mailbox rumors swirled in 2020, as did real concern about the U.S. Postal Service's ability to meet demand before the general election. 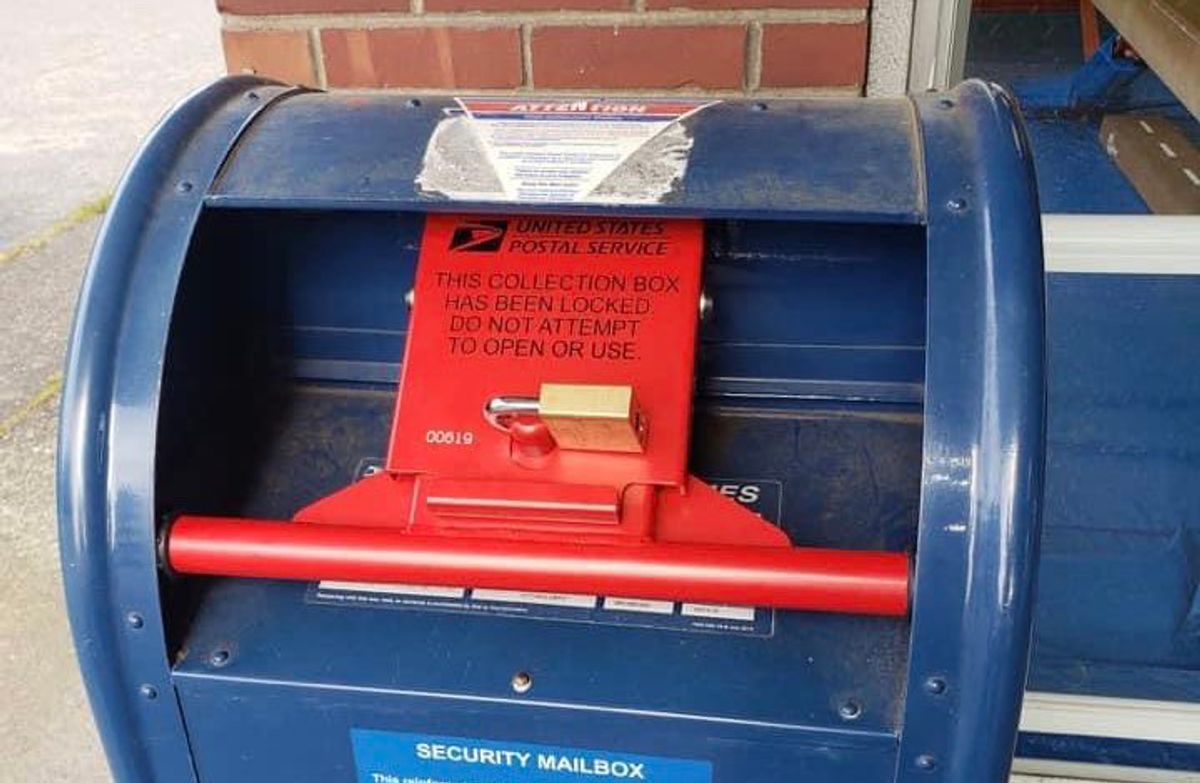 Postal Service spokespeople said the agency does lock mailboxes selectively to prevent vandalism or mail theft and had done so prior to 2020.

No evidence showed that the Postal Service had deliberately installed the devices on some mailboxes to prevent people from casting mail-in ballots in 2020.

No proof exists to confirm or deny whether the agency had increased its usage of the locks in 2020.

Some posters suggested padlocks and heavy red bars on mailboxes in several U.S. cities were part of a nefarious scheme by newly appointed Postmaster General Louis DeJoy — a political ally to U.S. President Donald Trump — to make it harder for Americans to vote in the presidential election between Trump and Democratic nominee Joe Biden on Nov. 3, 2020. The claim surfaced weeks after DeJoy issued new guidelines for Postal Service mail carriers and clerks — directives that he framed as solutions to the agency's long-standing financial issues. Workers were instructed to leave some letters or packages at distribution centers longer than usual and informed them that management would no longer pay carriers overtime to complete all mail deliveries.

Meanwhile, Postal Service employees and customers reported delays in deliveries. And critics of Trump accused DeJoy of making the changes to intentionally slow the mail, which, as a result, could force elections officials to invalidate mail-in ballots not returned by predetermined deadlines — and potentially increase Trump's chances of winning another presidential term (claims we could neither prove nor disprove in a previous investigation here).

Responding to that criticism, DeJoy on Aug. 18, 2020, announced he would temporarily suspend the new initiatives “that have been raised as areas of concern,” including the controversial July 2020 directives that eliminated overtime and some delivery trips.

Despite DeJoy's reversal, social media users continued circulating photographs that supposedly showed Postal Service mailboxes being removed from neighborhoods (we explore that claim here), as well as pictures of mailboxes with the red locks — all evidence, they believed, of an alleged conspiracy to undermine voters' abilities to participate in the 2020 election and simultaneously avoid potential exposure to the COVID-19 disease at in-person polling places.

Many social media users posted about locked mailboxes as though they had not seen them prior to summer 2020, adding proof, they alleged, of the devices' role in stopping people from casting mail-in ballots before the presidential election. Rex Chapman, a former NBA player and outspoken Democrat, said on Twitter: To investigate the underlying claim — that the Postal Service deliberately placed locks on mailboxes in summer 2020 to stop voters from casting mail-in ballots — we first searched for evidence of such locks on mailboxes anywhere in the country prior to summer 2020. That proof would challenge the theory that the devices were only tied to a scheme by Postal Service leadership to undermine the 2020 presidential election.

Snopes found an April 23, 2016, story by Los Angeles Daily News that included a photograph of two mailboxes with padlocks and red bars to prevent people from using or getting inside the boxes. The setup matched what was depicted in some of the viral postings in summer 2020.

Richard Maher, a spokesman for Post Office operations in Los Angeles and Orange counties at the time, told the newspaper that the agency had retrofitted boxes across Southern California so carriers could install the locks during their last pickup of the day and then remove the devices the following morning. The locks, he said, were designed to stop people from illegally stealing other people's mail from inside the mail boxes. He said: "We do this where we have had incidents, or there is a problem where the box may be out in a not very well lit public place."

Another story — a July 5, 2018, article by The Brooklyn Daily Eagle, a newspaper for the New York City borough — also included a photograph of a mailbox with a padlock, red bar, and sign reading: "THIS COLLECTION BOX HAS BEEN LOCKED. DO NOT ATTEMPT TO OPEN OR USE." The article reported:

Postal officials had placed locks on every USPS mailbox in the neighborhood — that’s dozens — on Wednesday afternoon to prevent someone from setting off a bomb in one of them during the July 4 Independence Day fireworks display. [...] A USPS spokesperson told the Brooklyn Eagle that the locks were installed 'in the interest of safety and security.'

Based on those reports, we deemed it false to assert that the locks were only part of some alleged scheme on behalf of Postal Service leadership to disenfranchise voters in the 2020 presidential election.

Next, to fully investigate the claim that, even though the locks were not new, several devices were installed to prevent voters from casting mail-in ballots in 2020, we pinpointed where exactly people were reporting new locks to prevent mail-in voting. Social media posts that showed locked mailboxes in Burbank, California (a city in Los Angeles), Southfield, Michigan (a Detroit suburb), and Seattle, Washington, appeared to be the most widely shared or reported sources of the rumor alleging election interference.

On Aug. 19, 2020, we asked Ernie Swanson, a Postal Service spokesperson, about those posts specifically, and the overarching allegation that the agency purposefully installed locks on several mailboxes to suppress the vote. He responded with an email that read:

Mail collection boxes have locks placed on them usually because of acts of vandalism which result in the box no longer being secure. The locks have been in use for many years. The box is removed and repaired, if possible. The removed box is replaced with another box. I don’t know how many boxes get removed for this reason in the U.S.

In other words, he confirmed the agency had used the locks for years prior to 2020 as security tools. However, he did not comment on the validity of specific reports in Burbank, Southfield, and Seattle, nor explain for what reasons, exactly, those locks were installed. He also did not explain whether the agency had increased its use of the locks in 2020, which could result in some Americans seeing them for the first time in their neighborhoods.

However, it's also worth noting that one Burbank resident tweeted: "This Burbank post office has been locking up its mail boxes on Sundays/after hours for MONTHS because of theft. This is NOT an election thing." Responding to Chapman's tweet, specifically, another Burbank resident posted, too: "This is my post office. These mailboxes are open on the other side, you just have to get out of your car to mail them. It's been this way for months. This isn't part of the purge."

In sum, given the fact that the locks had been used prior to 2020 as security tools unrelated to electoral politics, the complete absence of evidence to prove Postal Service leadership had deliberately installed the devices to prevent people from casting mail-in ballots — as well as the lack of proof to confirm or deny whether the agency had upped its usage of the devices in 2020 — we rate this claim "Mostly False."

However, regardless of whether you're seeing locked mailboxes in your neighborhood, it's important to note here: The Postal Service has not met its goals for limiting delays of first-class mail (which is how completed mail-in ballots are categorized) in five years, according to the Postal Regulatory Commission. In 2019, for example, the agency delivered only about 81% of its three- to five-day, single-piece, first-class mailings on time — when its goal was roughly 95%, per a June 2020 report by the commission. That said, Thomas J. Marshall, the general counsel for the Postal Service, said in a May 29, 2020, letter about the anticipated surge in mail-in voting due to the pandemic:

"The Postal Service cannot guarantee a specific delivery date or alter standards to comport with individual state election laws. To account for delivery standards and to allow for contingencies (e.g., weather issues or unforeseen events), voters should mail their return ballots at least 1 week prior to the due date established by state law."