Did US Women's Soccer Kneel During National Anthem at 2020 Olympic Opener?

No national anthems were harmed in the making of this protest. 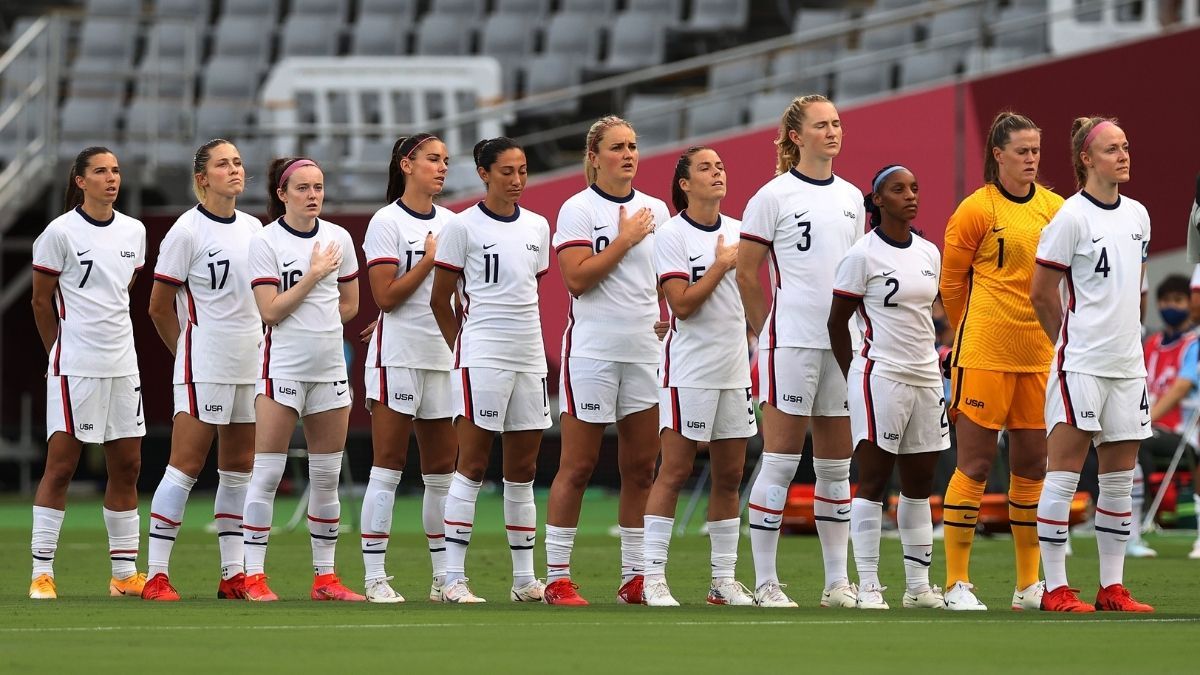 Claim:
The U.S. Women's Soccer team took a knee in protest of racial injustice during the national anthem before their opening game of the postponed 2020 Olympics on July 21, 2021.
Rating:

Several soccer teams, including the U.S. Women's team, took a knee before their opening matches of the 2020 Olympic Games in protest of racial injustice. These brief 10-second protests took place right before kick-off, not during any country's national anthem.

The U.S. women's soccer team got its 2020 Olympic journey off on the wrong foot after suffering a 3-0 loss to Sweden during the opening match on July 21, 2021. Some social media users appeared to celebrate the American team's defeat, arguing that it was some form of competitive karma in response to the team purportedly taking a knee during the national anthem before the game:

The U.S. women's soccer team did kneel before the opening match. However, this protest did not take place during the national anthem, and this protest was not conducted solely by the American team. The Swedish players also took a knee before kick-off. And, according to The Associated Press, players for the British, Chilean, Australian, and New Zealand teams also dropped to their knees before their respective matches:

The referee’s whistle blew, the British players glanced at one another and they dropped to their knees. Their Chilean counterparts responded in kind, all taking a knee at the Sapporo Dome.

An hour later, it was the American and Swedish players in Tokyo taking part Wednesday in united, unprecedented gestures against racism by teams at an Olympics.

And the final women’s soccer game of the day saw Australia’s players pose with an Indigenous flag and link arms before kickoff while their New Zealand counterparts knelt.

The players knelt in protest after the playing of the anthem and but before kick-off. According to Yahoo, the protest lasted about 10 seconds, and took place as some pregame music played in the background:

The U.S. women's national team and other soccer teams knelt before kickoff of their Olympic openers on Wednesday, the first demonstrations under slightly relaxed restrictions on protest at the Games.

The demonstrations were pre-planned, as they have been before various international soccer matches for over a year now as collective statements against racism and other forms of discrimination. English Premier League players first popularized the gesture last summer in the aftermath of George Floyd's murder and the subsequent racial justice reckoning that spread from the U.S. around the world.

At the USA-Sweden game in an empty Tokyo Stadium, at the sound of the referee's whistle, all 11 starters from both teams, plus the ref, dropped to one knee. They stayed there for about 10 seconds with pregame music still playing in the background. They then rose, and a short in-stadium countdown to kickoff commenced.

All 18 USWNT players stood for the anthem on Wednesday.

Several players commented on the protest in the hours after their respective matches.

Steph Houghton, the captain of the British team, said: "We felt strongly as a group that we wanted to show support for those affected by discrimination and equality ... It was a proud moment because the Chile players took the knee too to show how united we are as sport."

Megan Rapinoe of the U.S. women's soccer team said: "It’s an opportunity for us to continue to use our voices and use our platforms to talk about the things that affect all of us intimately in different ways ... We have people from Team USA, from all over the country, from all backgrounds, and people literally from all over the world for every other team so I obviously encourage everyone to use that platform to the best of their ability to do the most good that they possibly can in the world, especially as all eyes are on Tokyo these next couple weeks"