Did US Unemployment Reach Record Low Due to Trump?

The Trump campaign alleged pre-COVID-19 unemployment rates were evidence that he could jumpstart the pandemic-stricken economy. 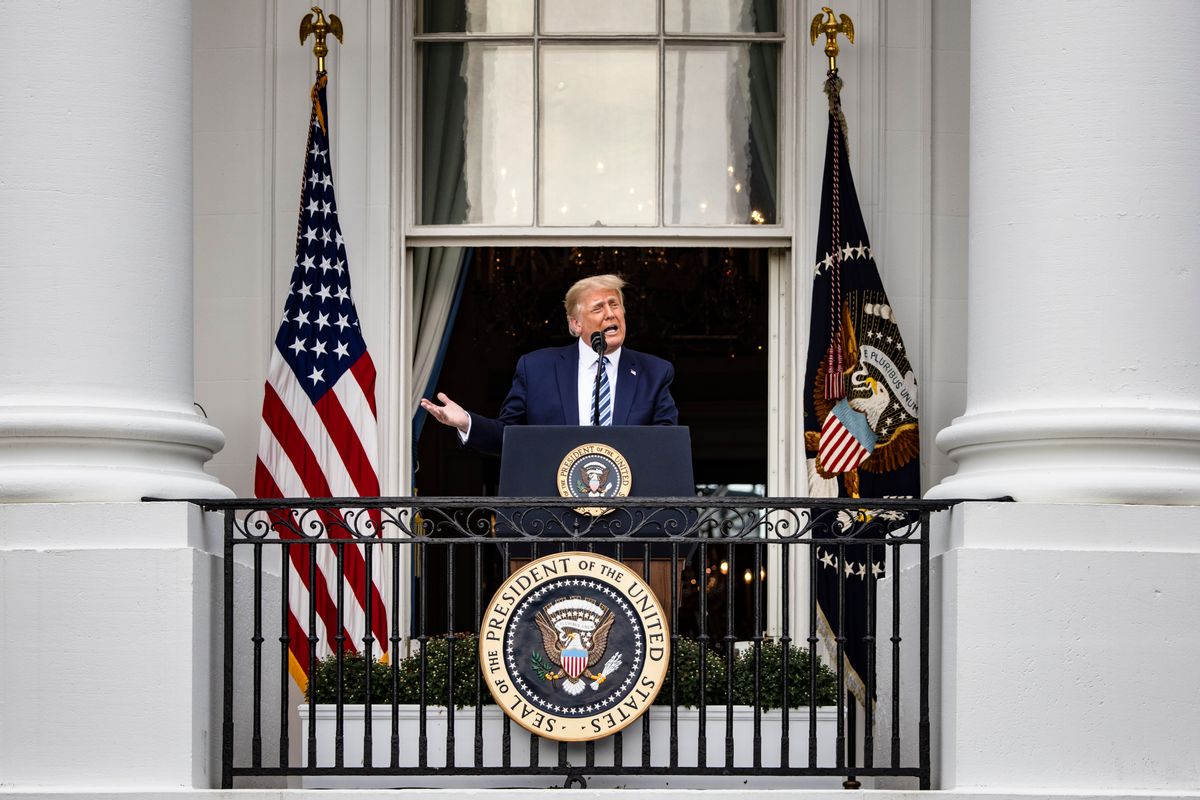 According to the Bureau of Labor Statistics, the country's unemployment rate dropped to 3.5% in fall 2019 — the lowest rate in about 50 years, since December 1969.

No evidence showed Trump or his administration's fiscal or regulatory policies caused the 50-year low. Rather, the unemployment rate was steadily declining as part of the country's overall recovery from the Great Recession before he took office.

During the U.S. vice presidential debate on Oct. 7, 2020, Republican candidate Mike Pence claimed he and U.S. President Donald Trump worked "from day one" in the White House to drive down American unemployment to "record" low levels — evidence, he alleged, that voters should re-elect Trump on Nov. 3 to try and reshape the economy after unprecedented job losses during the COVID-19 pandemic.

The statement echoed previous comments by the president. In October 2019, the White House issued a news release suggesting the Trump administration's "pro-growth agenda" was the reason for new jobs and a declining unemployment rate, reaching a level not seen in 50 years.

Then, on Jan. 29, 2020, roughly one week after the Centers for Disease Control and Prevention (CDC) confirmed the first COVID-19 case in the U.S., Trump reiterated on Twitter: About six weeks later as the deadly virus spread nationwide, Trump doubled down on that "50 year" claim and said his administration is responsible for the "best unemployment numbers in the history of our Country." He tweeted: The claim took on another layer as the pandemic worsened: Trump alleged without evidence that his administration was responsible for helping Black Americans, specifically, get jobs. For instance, on June 2, he claimed he "has done more for the Black Community than any President since Abraham Lincoln," and that the country's unemployment figure among Black Americans was evidence of that work.

After that, Trump supporters went a step further by circulating the below-displayed meme online, alleging that Trump not only drove down unemployment rates for people who identify as Black or African American but also women and Hispanic workers. This was true: U.S. Unemployment Reached 50-year Low Under Trump

But no evidence showed Trump was responsible for causing the dip.

First, to determine the validity of the underlying claim — that Trump shaped the economy so that U.S. unemployment dipped to the lowest rate ever — we considered the data available.

The Bureau of Labor Statistics (BLS) began calculating the country's unemployment rate — the number of people seeking work divided by the sum of that amount and total people employed — in March 1940, when demographers first launched a monthly survey of households nationwide called the "Current Population Survey." Before that, more subjective and less comprehensive data existed. So to ensure accuracy in this report, we only considered the country's unemployment figure post-1940, as compiled by BLS and the U.S. Census Bureau and to which government officials refer.

According to our analysis of the labor statistics before Trump's inauguration on Jan. 20, 2017 (see below for our analysis of the jobless rate during his presidency), the country recorded the lowest unemployment rate in 1944, near the end of World War II. At that time, just 1.2% of Americans were unemployed and seeking jobs, per BLS data, which included workers over the age of 14. (Note: The survey in modern years only counted adults and teenagers over the age of 16, not 14.) Next, we considered BLS unemployment data over the course of 50 years before Trump's inauguration to determine whether the country's jobless rate indeed fell to the "the lowest level in more than 50 years" under his leadership.

After that, we obtained statistics to gauge the country's monthly unemployment rate from the beginning of Trump's term — Jan. 20, 2017 — to January 2020, when the U.S. COVID-19 outbreak began and businesses on a grand scale prepared to temporarily close or furloughed workers to prevent the spread of the deadly virus. (We did not consider U.S. unemployment during the outbreak since the claim was framed by the Trump campaign that he was more suited than Democratic rival Joe Biden to revive the pandemic-stricken economy.)

Per the BLS' Current Population Survey, the country's unemployment rate in February 2017, which was compiled including survey responses in the weeks before and after Trump took office in January, was 4.6%. From that point, the proportion of Americans seeking work compared to the total number of people in the country's workforce slightly decreased under the Trump administration. By September 2019, the percentage reached 3.5% — the lowest rate since December 1969.

That meant Trump was correct in saying that unemployment dropped to the lowest point in about 50 years under his watch. However, his second tweet — that that metric was the lowest in U.S. history (or since the comprehensive unemployment data existed) — was false. The World War II-era 1.2% unemployment rate was lower.

According to BBC economists' analysis of the recent employment figure, the change was a result of 490,000 Americans leaving the workforce. Jerome Powell, whom President Barack Obama appointed to the Federal Reserve System's board of governors and Trump promoted to the agency's chairman in 2018, told CBS News at the time that "an unusually large number of people in their prime working years" were not seeking employment or maintaining jobs for a variety of reasons, such as the U.S. opioid crisis, and that the U.S. workforce participation rate was lower than almost every other advanced country.

Economist: 'It's Been A Continuation of a Steady Trend."

We also obtained data showing the country's unemployment rate by race and gender to determine the accuracy of the above-displayed meme that alleged the percentage of unemployed female workers, as well as people who identify as Black, African Americans or Hispanic, was higher in 2009 than in 2019, among other things. According to the monthly data, these facts were true at face value:

But that statistical snapshot is missing necessary context to consider the claim — that Trump's fiscal and regulatory policies led to millions of workers finding jobs — accurate: In February 2009, roughly one month after Obama was sworn into office, he signed a $787 billion stimulus package to save jobs and reverse the economic downturn. The increased public spending on everything from roads to science programs to unemployment benefits, as well as other market trends, created new jobs on a mass scale. And, in turn, labor statistics showed a steady increase in job growth and a gradual decrease in the country's jobless rate over the course of a decade until the pandemic hit.

Looking at the graph above, we determined no significant disruptions or changes in the country's unemployment rate when Trump took office — the steady decrease is essentially indistinguishable from the Obama years after the recession. "At best, you would say it's been a continuation of a steady trend," economist Austan Goolsbee told MSNBC.

In other words, it was false to claim that Trump moved into the White House and jumpstarted a failing economy. Rather, conditions were improving for American workers years before voters elected the real estate billionaire as president. NBC News reported in August 2020:

The president rightly takes credit for having low unemployment during his presidency. In December of 2019, the unemployment rate was a scant 3.5 percent, the lowest it had been in 50 years.

However, as good as that number was, when Trump took office the rate was already at 4.7 percent. That figure is quite low by historical standards (lower than all of the 1980s as well as most of the 1990s and 2000s). In December of 2017, it was the lowest the number had been since the Great Recession. In fact, Obama saw a much steeper drop in unemployment in his second term, a 3.3 drop in the rate, than Trump did in his first three years, a decline of 1.2 points.

That’s not to besmirch the remarkably low unemployment under Trump, but it’s hard to ignore that the unemployment track under Obama had been downward. Again, the numbers look like the continuation of a trend, not something new.

Another analysis of labor statistics by NPR came to the same conclusion: that job growth remained consistent since the end of the recession in 2010 and 2018, while the unemployment rate steadily decreased. NPR reported:

So while the White House can certainly point to some yardsticks that indicate a meaningful turnaround on Trump's watch — including small business sentiment, business investment and goods-producing job growth — broader measures of the overall job market and wages show the economy continues to follow the steady, upward glide path that began under Obama.

In sum, considering no evidence showed policies enacted by the Trump administration drove down the country's unemployment rate — but rather the roughly 50-year low in fall 2019 was essentially a continuation from the Great Recession's recovery, per economists' analysis of BLS data — we rate this claim "Mostly False."

Ruhle, Stephanie.  "Which President Gets The Credit For The Booming Economy?"    MSNBC.  10 September 2018.