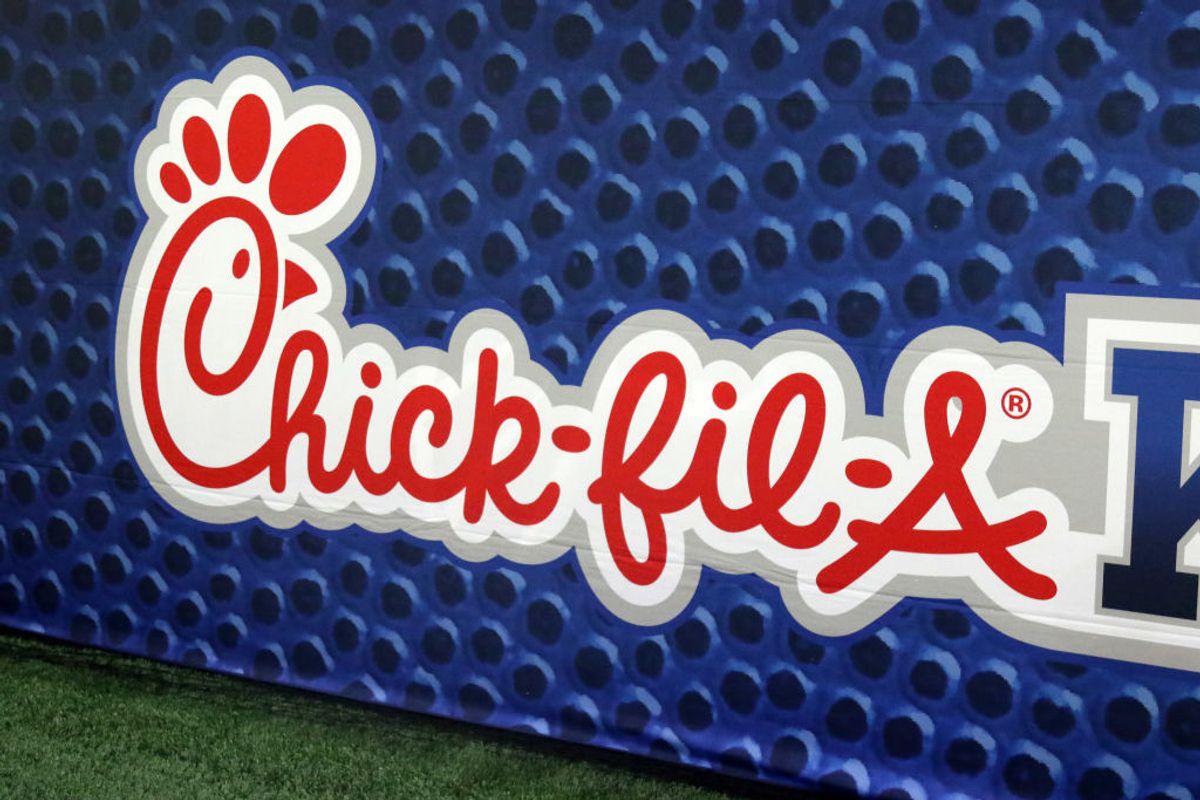 Claim:
In October 2019, Chick-fil-A's charitable donations were contributing to efforts to introduce the death penalty for homosexuality in Uganda.
Rating:

However, the Ugandan minister did not signal an intent to legalize the murder of LGBT people, and his remarks were quickly contradicted by the government; also, it's not clear to what extent National Christian Foundation-funded entities were involved in the creation or promotion of a bill to make homosexuality punishable by death.

In October 2019, we received multiple inquiries about the accuracy of a viral tweet that claimed the fast food chain Chick-fil-A had indirectly encouraged and facilitated a legislative proposal in Uganda that would make it legal to kill LGBT people.

If you eat at Chick-fil-a, this is what your money goes to.

The tweet was further promulgated when users on Facebook shared screenshots of it, including the popular, left-leaning page The Other 98%:

The tweet consists of three discrete factual claims: that in October 2019, Uganda's government announced legislation that would legalize murdering LGBT people; that the U.S.-based National Christian Organization was involved in devising, encouraging, or lobbying for that legislation; and that Chick-fil-A funds the National Christian Organization. The following is our analysis of those claims:

On Oct. 10, Uganda's Minister for Ethics and Integrity, Simon Lokodo, told the Reuters news agency that the country's government intended to revive a failed 2014 bill, known at the time as the "Kill the Gays" bill, that would make "grave acts" of homosexuality punishable by death. Reuters reported that:

Uganda announced plans on Thursday for a bill that would impose the death penalty on homosexuals, saying the legislation would curb a rise in unnatural sex in the east African nation. The bill - colloquially known as “Kill the Gays” in Uganda - was nullified five years ago on a technicality and the government said it plans to resurrect it within weeks.

“Homosexuality is not natural to Ugandans, but there has been a massive recruitment by gay people in schools, and especially among the youth, where they are promoting the falsehood that people are born like that,” Ethics and Integrity Minister Simon Lokodo told the Thomson Reuters Foundation.

“Our current penal law is limited. It only criminalises the act. We want it made clear that anyone who is even involved in promotion and recruitment has to be criminalised. Those that do grave acts will be given the death sentence.” ... Lokodo said the bill, which is supported by President Yoweri Museveni, will be re-introduced in parliament in the coming weeks and is expected to be voted on before the end of the year.

Later in 2014, Uganda's Constitutional Court struck down the "Anti-Homosexuality Act" on the basis of a technicality relating to its passage through the country's Parliament. Homosexuality remains outlawed in Uganda.

Two days after Lokodo signaled the government's intention to revive the introduction of the death penalty for homosexuality in October 2019, the government press office itself intervened, directly contradicting the minister's assertions, and writing in a statement:

"Government hereby clarifies that it does not intend to introduce any new law with regards to the regulation of LGBTQ activities in Uganda because the current provisions in the Penal Code are sufficient."

Lokodo is a government minister and runs the department (Ethics and Integrity) that has in recent years overseen legislative efforts around homosexuality. As such, his initial Oct. 10 announcement was of significant import and should not be dismissed in light of the subsequent contradictory statement from the central government press office.

Until or unless Lokodo issues a retraction of his remarks, or further clarification is forthcoming, it is simply not clear what the Ugandan government's resolved intentions are, as of October 2019, regarding the possible introduction of the death penalty as a punishment for homosexual acts.

In his interview with Reuters, Lokodo did not signal his intention to introduce a law that would "legalize murdering" LGBT people, as @sloppyposts claimed. Some observers might see an ethical equivalence between imposing state execution as a punishment for homosexuality, on the one hand, and legally permitting any and every civilian to murder another civilian, on the basis of sexual orientation or gender identity. However, they are not the same thing.

The viral tweet published by @sloppyposts was accompanied by follow-up tweets that cited several sources — a 2010 article by the website Queerty, a 2012 article by Business Insider, and a 2014 report by the website Twocare, which describes itself as the "Center Against Religious Extremism."

Twocare's article contained a detailed, in-depth examination of the financial and organizational links between the National Christian Foundation (which the tweet mistakenly called the "National Christian Organization") and a number of other conservative Christian, non-profit groups, in particular as that collaboration related to campaigns and advocacy against LGBT rights, including in Uganda.

The report features disbursement amounts from the Foundation to dozens of sample Christian charities and projects, including several that have been involved in anti-LGBT advocacy or preaching in Uganda, specifically, between the years 2001 and 2013.

However, a brief skim of some of the thousands of pages of records on the National Christian Foundation's (NCF's) federal tax returns for 2014, 2015, and 2016, show that it has continued to fund many of the same anti-LGBT projects in Uganda.

It's not clear to what @sloppyposts was referring by writing that the "National Christian Organization" (read: the NCF) had "paid a preacher to go to Uganda and help their lawmakers with the bill." However, as the Twocare report detailed, many American pastors and preachers — funded either directly or indirectly by the NCF — have in recent years met with, trained, and spoken alongside anti-LGBT Ugandan ministers.

The journalist and author Jeff Sharlet has reported that, in interviews, the Ugandan M.P. David Behati — who first introduced the Anti-Homosexuality Bill in 2009 and was a key player in the ensuing campaign — described to Sharlet the influence of a controversial American Christian conservative movement known colloquially as "The Fellowship" and "The Family" in devising and encouraging the legislation, including at the early stages when it still included a death penalty provision.

Speaking to Harper's in 2010, Sharlet explained the purportedly close links:

Bob Hunter, designated by the Family as a spokesman to respond to the Uganda fiasco, has referred to David Bahati, the author of the Anti-Homosexuality Bill, as a member of the Family. Hunter and Bahati both told me that Hunter had paid a visit to Bahati in Kampala to assure Bahati that he remains in good standing, despite Hunter’s personal opposition to the bill. I give Hunter credit for being vocal about that; but there’s a profound lack of accountability at every other level. The Family built the prayer group structure from which the bill emerged. For readers not familiar with it, by the way, “harsh” is an understatement: life imprisonment for gay sex, death for “serial offenders,” seven years for “promotion,” and three years for failing to turn in a known homosexual.

When I asked Bahati, in Kampala, whether there was a connection between the Family and the bill (he calls the group the Fellowship but also acknowledges it as the Family), he said, “There is no ‘connection.’ They are the same thing. The bill is the Fellowship. It was our idea.” An idea, he added, that he’d believed in alignment with the biblical principles they shared, based on his multiple visits to the National Prayer Breakfast and to the Cedars, their Arlington headquarters, and on the many visits to his Family prayer group in the Parliament by Family men such as Sen. Jim Inhofe and former Attorney General John Ashcroft, who emphasize there what Inhofe calls the “political philosophy of Jesus,” something he says he learned from the Family. Bahati brought the bill to a private meeting of international Family leaders before he introduced it; he says he got a green light. The Family says they expressed caution. It’s possible both things are true, after a fashion—the Family rarely risks its access by holding its members accountable.

Chick-fil-A and the NCF

The link between the NCF and Chick-fil-A is that the NCF has received funding from the WinShape Foundation — the charitable organization started by Chick-fil-A's founder Truett Cathy (who died in 2014) and his wife, Jeannette, (who died in 2015).

The WinShape Foundation routinely disburses millions of dollars every year to Christian and conservative non-profit groups and projects, placing a particular emphasis on "family values." As we detailed in a previous fact check, this commitment to "Biblical values" has seen Chick-fil-A's leadership speak out against same-sex marriage, and the WinShape Foundation fund groups actively opposed to certain aspects of LGBT rights.

For several years, the WinShape Foundation provided some funding to the NCF, in particular, as shown in the charity's annual tax documents, which are available here. That funding covered 2008, 2009, 2010 and 2011 -- a period which is the central focus of the claims about U.S. missionary involvement in devising and promoting an anti-LGBT law in Uganda which originally contained provision for the death penalty.

In more recent years, including 2017, the WinShape Foundation's tax returns do not indicate that the charity has continued to fund the NCF.

Furthermore, the vast majority of the contributions received by the Foundation each year comes from the company, including $21.3 million out of $22.1 million in 2017.

A strong element of truth ran through the widely shared claims made by @sloppyposts in October 2019, but some details were lacking in accuracy. A Ugandan government minister did declare an intention, in October 2019, to introduce the death penalty for homosexuality. However, he didn't propose legalizing the murder of LGBT people, and his remarks were quickly contradicted by his government.

The National Christian Foundation (which the meme wrongly called the "National Christian Organization") has for several years funded groups, projects and individuals involved in opposing LGBT rights in the United States and Uganda. However, despite plausible reports, it is not clear to what extent NCF-funded entities or individuals were involved in the nitty gritty of drafting and promoting legislation, beginning in 2009, which would have imposed the death penalty for homosexuality. Nor is it known whether NCF-funded groups are involved in any potential renewed efforts to introduce such a punishment in 2019, as signaled by Ethics and Integrity Minister Simon Lokodo

Finally, it's absolutely true that the WinShape Foundation, which was founded by the Cathy family, is still run by them, and receives almost all of its funding from Chick-fil-A, has for several years provided funding to several Christian conservative groups and projects, and funded the NCF during the crucial period of 2008-2011, when the original anti-LGBT legislation was first being devised and promoted. That means a real and substantive connection does exist between the funding disbursed by the WinShape Foundation and the activities of NCF-backed groups and individuals in Uganda.

Update [17 October 2019]: Added clarification that the WinShape Foundation does not appear to have continued funding the National Christian Foundation between 2012 and 2017.