Just because a photo is real doesn't mean its caption is. 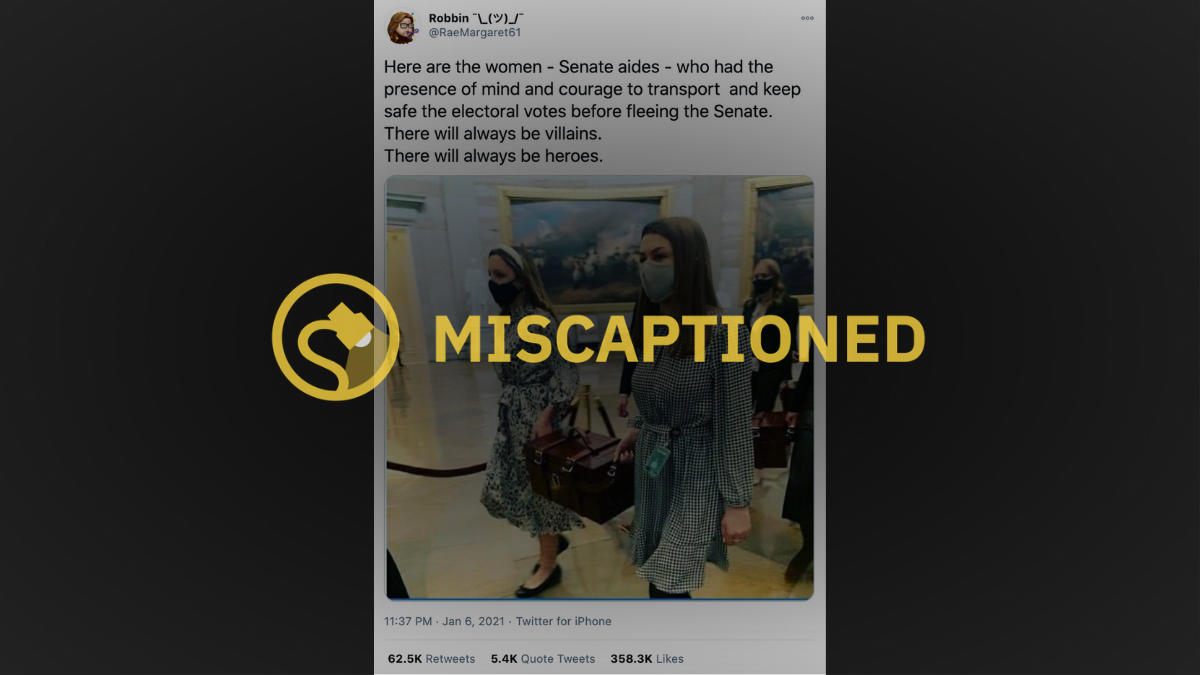 After rioters who opposed the 2020 presidential election results stormed the U.S. Capitol on Jan. 6, 2021, the internet experienced a social media frenzy of fake and misleading photographs. One such post included a viral photograph that showed two women who appeared to "rescue" boxes containing Electoral College votes by transporting them to safety.

A tweet by Sen. Jeff Merkley posted at the height of the Jan. 6 riots, for instance, reported that the votes were removed from the Senate floor by floor staff who had grabbed them. Had they not, he claimed, they would have been “burned by the mob.”

Snopes contacted the senator’s Deputy Communications Director Martina McLennan, who confirmed that Merkley was “referring there to the parliamentary floor staffers who work on behalf of the entire Senate” and not to any particular staffers who work in his personal office. McLennan referred Snopes for more information to the parliamentarian of the Senate, with whom we left a voicemail message but did not receive a response at the time of publication.

Later that evening, a Twitter user shared a picture of two women carrying the boxes through what appeared to be the rotunda. In the now-viral post, Twitter user @RaeMargaret61 claimed that the women identified as “Senate aides” had the “presence of mind and courage to transport and keep safe the electoral votes” before they fled the Senate chambers. As of this writing, the photograph had been shared over 66,000 times and received nearly 50,000 upvotes on Reddit.

It appears that the photograph in question is genuine, but it is not immediately clear if the two women were walking to the Senate floor in advance of the certification of the votes — and before the riots, for that matter — or if the duo had indeed transported the boxes in response to the incoming mob.

A similar picture was published by the photography syndicate Getty Images with the following caption:

Chamber Assistants carry Electoral College ballot boxes during a joint session of Congress to tally the electoral votes for the president and vice president in the Capitol in Washington on Wednesday, Jan. 6, 2021. Snopes contacted photographer and Getty contributor Caroline Brehman, who confirmed that both photographs were taken before the riots happened.

“They are carrying in the ballot boxes to the House chamber for the initial opening of the session yesterday. If you check the timestamps it can show that this happened at least an hour before anyone broke into the Capitol,” wrote Brehman in an email.

A side-by-side comparison of the two pictures shows that the women are walking in the same direction through the Capitol Rotunda, with John Trumbull’s painting, “Surrender of Lord Cornwallis,” on display in the background. If the two women were leaving the House Chamber following the riots, they would likely have been fleeing in the opposite direction. Because the photo appeared to be authentic but its caption contained false information, we rate this claim as "Miscaptioned."