Was Tucker Carlson in the Dan White Society? 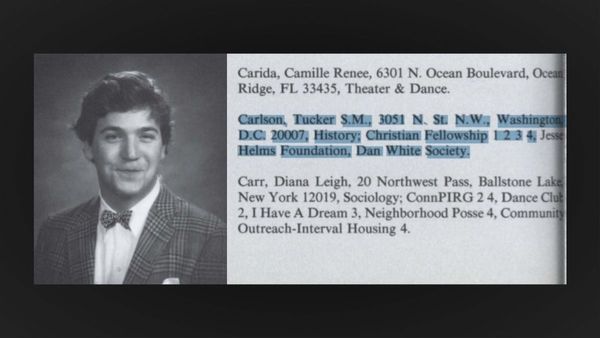 Claim:
Fox News host Tucker Carlson was listed as a member of the "Dan White Society" in his college yearbook.
Rating:

This viral image truly comes from Tucker Carlson's college yearbook. However, unknowns remain about what this group did — if it existed at all — and how the Fox News hosts was involved with it.

In April 2021, an image started to circulate online that supposedly came from Fox News host Tucker Carlson's college yearbook. The image shows a young Carlson and a brief list of some of the activities and clubs that he was involved with at the time such as "Christian Fellowship," the "Jesse Helms Foundation," and the "Dan White Society."

This image comes from a yearbook for the class of 1991 at Trinity College in Hartford, Connecticut, when Carlson was a senior at the approximate age of 22. A digital copy of this yearbook is available here. A spokesperson for the college confirmed to The Wrap that the image was authentic.

This image truly comes from Carlson's yearbook, and it truly shows the "Jesse Helms Foundation" and the "Dan White Society" listed next to his name. While it seems particularly likely that these terms are referring to Jesse Helms, a former North Carolina Senator and opponent of gay and civil rights who once said: "Nothing positive happened to Sodom and Gomorrah and nothing positive is likely to happen to America if our people succumb to the drumbeats of support for the homosexual lifestyle," and Dan White, an American politician who assassinated San Francisco Mayor George Moscone and California's first openly gay elected official, Supervisor Harvey Milk, in 1978, this yearbook offers no further information about these two groups.

We were not able to find any other mentions of the "Dan White Society" or the "Jesse Helms Foundation" in this yearbook, which may indicate that these were not school-sanctioned groups. It's also unclear if Carlson requested to have these items himself, or if they were added by the yearbook editor.

Carlson has not commented on his alleged involvement with these groups. On April 20, shortly before this image started to circulate on social media, Carlson said on his show that a journalist from The Washington Post (who Tucker describes as a "Jeff Bezos' minion") had been talking with some of his former classmates:

It should be noted that while Carlson says in this clip that he hosts a "news program," when Carlson was accused of slander, Fox News' lawyers argued in court that no reasonable person would believe that Carlson is accurately representing the facts.

The judge in the case agreed, stating: "[The] 'general tenor' of the show should then inform a viewer that [Carlson] is not 'stating actual facts' about the topics he discusses and is instead engaging in 'exaggeration' and 'non-literal commentary.' "

Carlson would have been about 9 when White assassinated Milk and Moscone in November 1978. These assassinations were a major story at the time, not only because they involved the killings of two government officials, but because Milk was the first openly gay person to be elected to office in the state of California. Furthermore, White entered City Hall with a loaded gun, avoided metal detectors by using a basement window, and reloaded his weapon after killing Moscone to go find and murder Milk. White was found guilty of manslaughter and was only sentenced to seven years in prison.

In the aftermath of White's sentencing, rumors circulated that his attorneys had successfully argued that their client only committed the murders because he ate too many Twinkies. While this rumor is rooted in a grain or two of truth, and while the term "Twinkie Defense" is still used to derisively describe an improbable legal defense, White's lawyers never argued that these murders were the result of too many Twinkies. You can read more about the "Twinkie Defense" here.