Did a 1990 Comic Depict Trump Coming to Power and Building a Wall? 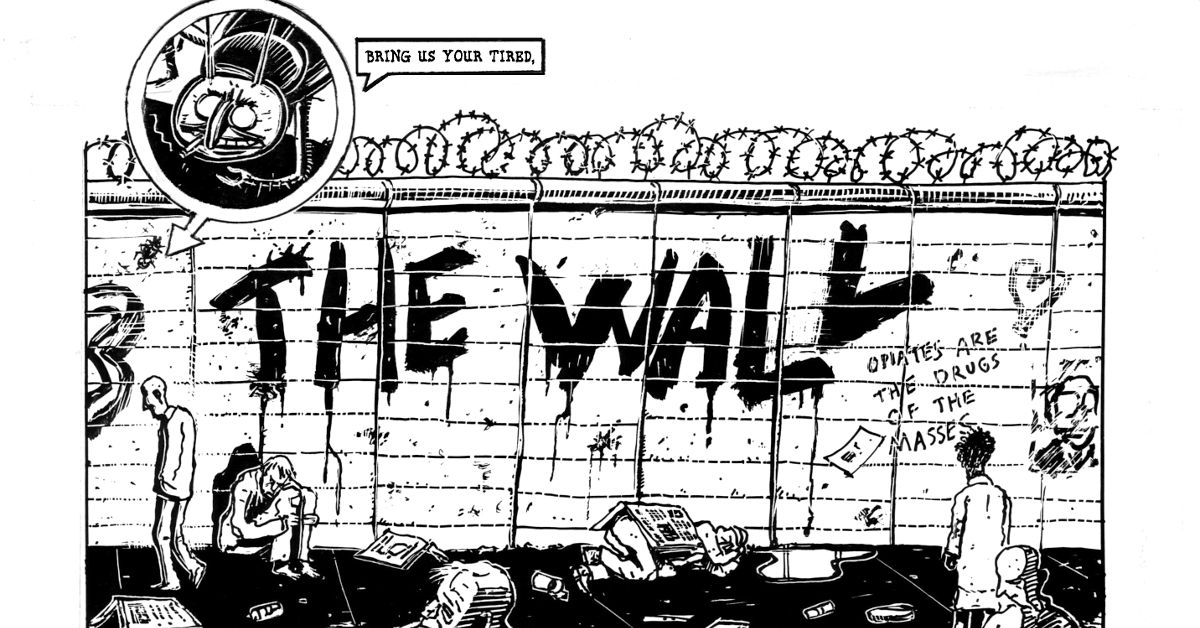 Claim:
A July 1990 comic strip in Heavy Metal magazine featured a controversial wall in New York City, built by Donald Trump, and a populist "rise to power" by the future president.
Rating:

In September 2017, there was renewed interest in a 1990 comic strip by the artist Peter Kuper, which appeared to preempt current events by featuring the construction of a large, controversial wall by Donald Trump, as well as a populist "rise to power" by the future United States President.

Peter Kuper did a comic about nationalist Trump coming to power on a build-a-wall platform. This was 27 years ago in Heavy Metal in 1990. pic.twitter.com/1cEZe5Hxnj

The artist Peter Kuper confirmed to us that the comic strip, titled "The Wall," is authentic, and was published in Volume 14 Number 3 of Heavy Metal magazine in July 1990. Its existence has gained new interest because Trump began his 2016 presidential election campaign partially on the basis of a pledge to build a wall along the southern border of the United States.

After his election in November 2016, Heavy Metal magazine ran a feature article on the then 26-year-old comic strip, offering this summary:

“The Wall” begins with a disavowal of well-known lines of “The New Colossus,” the poem associated with the Statue of Liberty. In this story, we’re living in a divided city [New York] where the haves and have nots can barely relate to each other. In fact, the cultural and economic divide has been made real in the form of a wall to “keep the peasants at arm’s length.”

Law enforcement had been overwhelmed; the cops were running for their lives. So, a wall: The brainchild of Trump and [real estate mogul Harry Helmsley]. But the relationship between these two egomaniacs can’t last, and in a fit of rage Helmsley carries out a purge called the “Night of the Long Skates.” All Trump’s associates are wiped out, and Trump himself escapes into the NYC sewer. But Trump plots his revenge.

...In this story, [a pro-Trump group called the Guardian Demons] band together in their hats, led by a Messianic Trump who convinces his followers that Helmsley is the reason for the unemployment and poverty they face. The mob carries Trump to a humiliating victory over Helmsley, a feat Trump promises to commemorate with a monument...

The "People's Monument" promised by Trump is yet another wall. The final panels of the comic strip show a graffiti artist spraying "Dump Trump" on the wall - a slogan popular in 2017 among the President's critics.

The article goes on:

Ok, so Trump isn’t president in this 26-year-old story, but the man depicted is fully recognizable as the current President-elect. The tactics used to motivate followers, the faith in the power of walls, the goddamn hats — it was all there.

Peter Kuper explained the origins of the comic strip to us:

The idea came to me after a visit to Berlin in 1987 before their wall came down. Trump was a well known real estate mogul at that time. So was Helmsley. The pieces of the story fell into place.

He added: "I wish my pen, instead of predicting the future, would be able to change current events."