Is This a Trump Tower Billboard in Mumbai?

A photograph purportedly shows a billboard for Trump Tower in Mumbai with homeless people sleeping in the street beneath it. 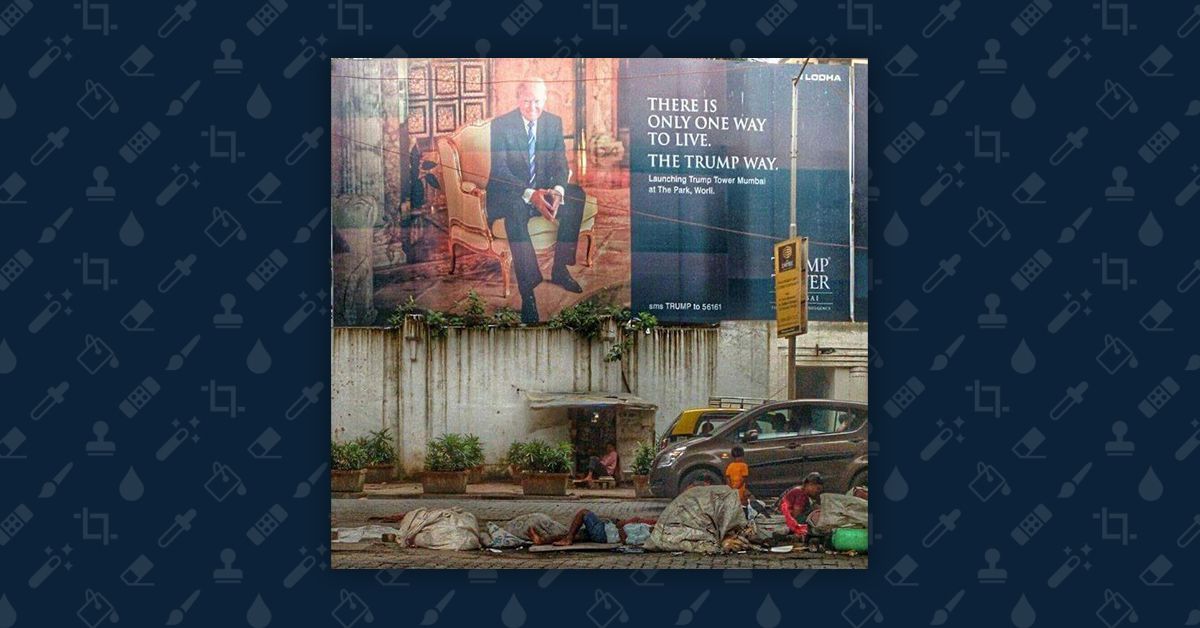 Claim:
An image shows an advertisement for Trump Tower in Mumbai stating that there is "only one way to live" installed over a group of homeless people.
Rating:

An image purportedly showing a billboard advertisement for Trump Tower Mumbai — which shows a photograph of the American businessman and President-elect alongside the slogan "There is only one way to live" with a group of apparently homeless people sitting and sleeping in the street beneath it — was circulated on social media in December 2016: A Trump Tower was indeed built in Mumbai, and several billboards for the project were installed around the city. In June 2016, Getty Images published several photographs showing Trump Tower billboards around the Indian city. These advertisements carried the slogan "Trump is back":

A billboard for the upcoming luxury residential apartment complex Trump Tower Mumbai, which bears the name of billionaire real estate tycoon and US presidential hopeful Donald Trump, is seen next to a busy road in Mumbai on June 3, 2016. Trump, the Republican frontrunner in the US presidential elections, to his fans, is the definition of American success, the cut-throat tycoon who can magically fix all that ails a nation no longer sure of its place in the world, and home to an increasingly frustrated white working and middle class. But there is barely a corner of Manhattan that the Trump Organization hasn't conquered with luxury buildings. Its portfolio of hotels, golf courses, casinos and luxury estates straddles the world, from California to Mumbai.

A photograph published by India news outlet Mid-Day in May 2016 also shows that a similar billboard in the same area displayed the slogan "Trump is back" rather than "There is only one way to live": We uncovered an image that was posted on 21 December 2016 by Muhammad Sabir, the founder of Slumabad (an organization that works to give homeless children access to education and economic opportunities) along with a message about income inequality:

This photo tells a story of poverty, inequality and deprivation of basic human dignity and rights. It puts all human development in question and asks basic simple questions from us:

Can we call ourselves civilized, while we see our fellow human beings living on footpath like animals?

Is there only one way to live left for millions of deprived souls?

While many people who viewed the image were initially skeptical about its authenticity (including us), the image is real. It was originally posted to Facebook on 27 August 2014 by Paul Needham, who took the photograph:


Needham also sent us a high-resolution, uncropped version of the photograph to prove its authenticity: He also sent us different photographs of the same scene: Note: The original version of this article said that the image was not real, based on our initial inability to track down its photographer or source. We have now heard from him and updated our article accordingly.