An invitation for a fundraising event stated that donors could meet Donald Trump and hunt with his sons. 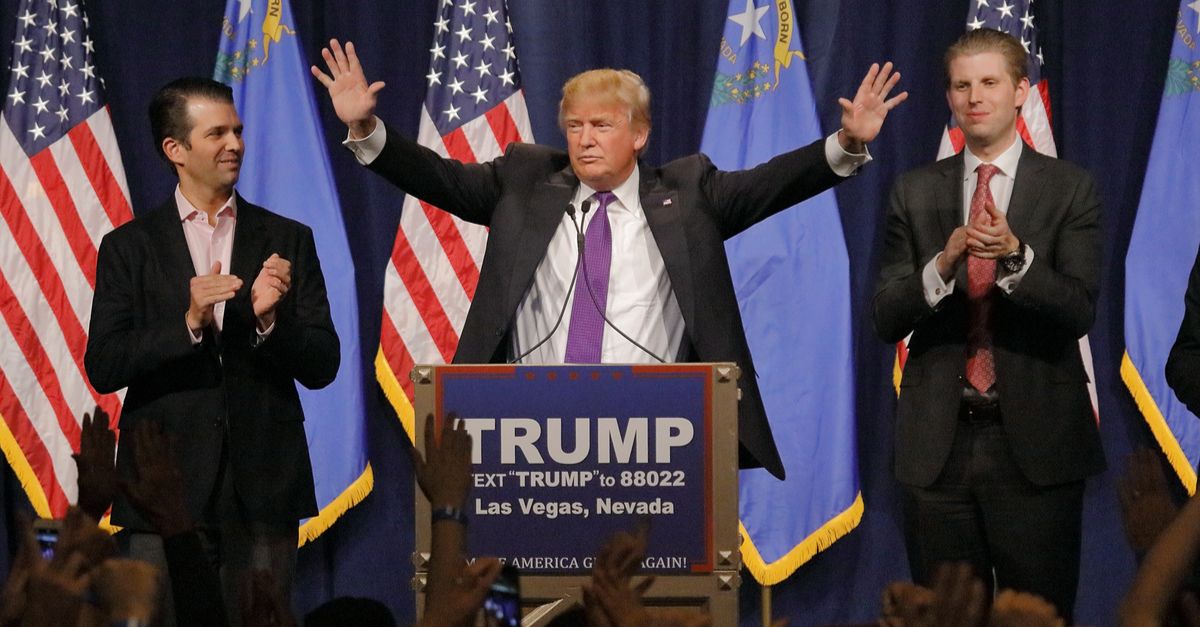 A draft of an invitation for a post-inauguration event called "Opening Day 45" listed a meet and greet with president-elect Donald Trump and a hunting trip with his sons Donald Jr. and Eric Trump.

Trump's transition team said they did not approve the details of the event, and a new invitation did not list any of Trump family members as part of the experience.

In December 2016, several web sites reported that Donald Trump Jr. and Eric Trump, sons of President-elect Donald Trump, were selling access to their father via a fundraising event called "Opening Day 45" scheduled for the day after his inauguration:

BREAKING: Donald Trump’s Kids Are Selling Access To Their Father For A $1 Million “Donation” — This Is IMPEACHABLE! [DETAILS]

The shamelessness of President-elect Donald Trump and his family is limitless and without boundaries. They do not care about the appearance of impropriety or actual impropriety. That is why Trump’s sons, Eric and Donald Jr., founded a non-profit organization to funnel money through when they sell access to Trump once he is inaugurated. Indeed, Fascism has come to America in the form of an orange failed businessman with a penchant for using racial slurs.

The non-profit the Trump offspring founded is named the “Opening Day Foundation“, and they are offering Trump’s richest supporters the grand opportunity of private access. However, the access comes with a price tag of a cool one million dollars. Individuals who are rich, but not rich enough to attempt to buy a favor from the president, can also purchase time with either of the Trump boys for as little as $25,000. What does one purchase besides time with Trump? Certain packages include pictures and a private reception with the president. Others include a multi-day hunting trip, or a fishing trip with Eric or Donald Jr.

Reports that the Trump sons were selling access to their father began on 16 December 2016 when the gossip web site TMZ published a draft of an invitation for the "Opening Day 45" event. The unofficial invitation featured several packages which donors could buy, such as the $1 million "Bald Eagle" package (which included a photo opportunity with the president-elect) or the $500,000 "Grizzly Bear" package (which included a hunting trip with Donald Jr. and Eric Trump): The Washington Post reported that the Trump sons were temporarily listed as "hosts" of the event on the "Opening Day 45" web site. However, Trump spokeswoman Hope Hicks said that the initial invitation was just a draft and had not been approved by Trump's transition team. Furthermore, Hicks added, Donald Trump Jr. and Eric Trump were not involved with the event:

“Donald Trump Jr. and Eric Trump are avid outdoorsman and supporters of conservation efforts, which align with the goals of this event, however they are not involved in any capacity,” she said in a statement. “Additionally, the President-elect is not aware of the event or the details pertaining to.”

While Donald Trump Jr. and Eric Trump may not be involved with the planning of this particular event, they were listed as members of the Board of Directors on paperwork filed to register the non-profit "Opening Day" foundation on 14 December 2016. Again, however, Trump's transition team asserted that Eric and Donald Jr. were included on the foundation's paperwork without their permission:

But transition officials said the Trump sons were listed on the document without their permission and have asked the Texas secretary of state to remove their names.

[Mark Brinkerhoff, a spokesman for the event] confirmed that they should not have been named as directors of the Opening Day Foundation. He said that the paperwork filed last week was “not the official filing” and that new documents would be submitted shortly. Still, he said the Trump brothers were “supportive” of the foundation and its goals.

Eric and Donald Trump Jr.'s level of involvement with the organization is still unclear. A new version of the invitation for "Opening Day 45" published on the event web site on 20 December 2016 listed them as "honorary chairmen" but not organizers or hosts.

The photo opportunity with President-elect Donald Trump, as well as the hunting trip with his sons, was also absent from the newer invitation. Instead, donors who spent $1 million on the "Bald Eagle" package would get a private reception with unnamed VIPs and celebrities associated with the event: This version of the invitation is no longer available on the web site, however, which now leads to a "Coming Soon" page.

We've reached out to event spokesman Mark Brinkerhoff to clarify some information regarding the event.