Prominent conservative commentators boosted a false, mathematically impossible rumor about the president's salary donations, taking aim at the news media along the way. 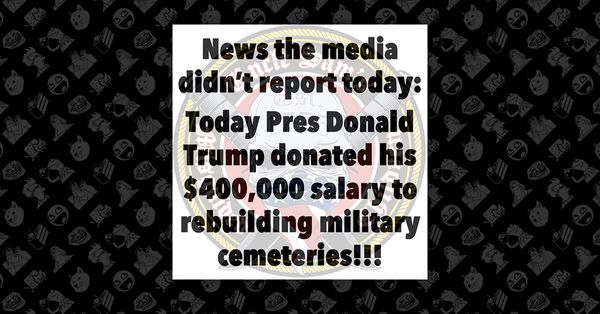 Claim:
In the summer of 2018, President Donald Trump donated his entire $400,000 annual salary to the Department of the Interior for the purpose of rebuilding military cemeteries.
Rating:

During his 2016 presidential campaign, Republican candidate Donald Trump, a billionaire real estate developer, vowed that if elected he would forgo the $400,000 annual presidential salary. So far as president Trump has stuck to that promise, handing over checks every three months for various projects overseen by different government departments.

In the first quarter of 2017, for example, President Trump donated $78,333 (his $100,000 salary for that quarter, after taxes) to the Department of the Interior, specifically for the National Park Service's maintenance of an historic Civil War site. His contribution was put towards two projects at Antietam National Battlefield in Maryland.

In July 2017, the White House announced in a press release that President Trump had donated his second-quarter salary to a science, technology, engineering, and math (STEM) camp for children, overseen by the Education Department. He signed over his third-quarter salary to the Department of Health and Human Services for a public awareness campaign about opioid addiction, and the last of his 2017 salary went towards an infrastructure grant program overseen by the U.S. Department of Transportation.

As the Washington Post has pointed out, some of the initiatives President Trump donated to were at uncertain stages of development or did not yet exist at the time he made his contribution, which prompted some additional scrutiny, but President Trump has nonetheless stayed true to his word and handed over a check representing his presidential salary every three months.

Trump continued this tradition in 2018, donating his first-quarter salary to the Department of Veterans Affairs, a sum which then-Acting VA Secretary Robert Wilkie said had been earmarked for "caregiver support in the form of mental health and peer support programs, financial aid, education training, and research." The president donated another quarter's salary to the U.S. Small Business Administration for the purpose of establishing an “Emerging Leaders” program focused "on helping veterans start small businesses after military life." And the third quarter of his 2018 salary went to the National Institute on Alcohol Abuse and Alcoholism, according to the Associated Press. On 18 March 2019, Trump announced on Twitter he was donating a quarter of his salary to the Department of Homeland Security. On 26 November 2019, Trump announced he was donating again, this time to the Office of the Assistant Secretary of Health in order to help battle the nation's opioid crisis.

In late July and early August 2018, scattered social media posts and memes claimed that the president had donated his entire $400,000 salary to the Department of the Interior, for the purpose of rebuilding military cemeteries. Many of these posts criticized the news media for not having reported on this purported donation. On 31 July 2018, for example, conservative radio host Mark Simone wrote, in a tweet that has since been deleted:

White House sent their spending report to Congress. This was in it: "Instead of taking his salary, Trump donated all $400,000 to the Department of the Interior where it will be used for construction and repair needs at military cemeteries!" Media gave this no coverage. One Facebook user garnered almost 150,000 shares within three days for a 31 July post which made similar claims:

And on 2 August, "Uncle Sam's Misguided Children" posted a widely-shared meme on Facebook, which was almost identical to Charlie Kirk's tweet: These social media posts were accompanied by articles published by various right-wing web sites including the Gateway Pundit, the Right Scoop, and the viral content web site Social News Daily.

There were two immediate problems with this set of claims. First, President Trump could not possibly donate his entire $400,000 annual salary for 2018 for the purpose of rebuilding military cemeteries, because he has already donated the first quarter's worth of that salary to the Department of Veterans Affairs for an entirely separate initiative. So he only had three-quarters of his salary left to distribute, a mathematical fact that undermines the credibility of these claims.

Second, the social media posts and articles making this claim were very thinly sourced, to say the least. Neither the viral Facebook post nor meme that we highlighted above cited any source, and the three news articles we mentioned all relied on the two tweets from Charlie Kirk and Mark Simone.

Kirk's tweet cited no source whatsoever. Simone claimed that the information came from a White House "spending report" sent to Congress, which he asserted contained the following statement: "Instead of taking his salary, Trump donated all $400,000 to the Department of the Interior where it will be used for construction and repair needs at military cemeteries!"

Simone did not include a link to that report in his tweet, and neither he nor Kirk responded to our requests for clarification or documentation.

Furthermore, we did not find the quotation that Simone included in his tweet in any official White House document or report to Congress. We did, however, find it in several online postings from the summer of 2017. As posted to the web site MyCrazyEmail.net on 25 July 2017, the message typically read as follows:

The Trump administration released their annual report to Congress on White House Office Personnel. It includes the name, status, salary and position title of all 377 White House employees. The report also said that Trump decided not to take a dime of his salary, instead he donated it to an amazing cause.

... It’s what the report said Trump did with this salary that has everyone talking!

Instead of taking his salary, Trump donated all $400,000 to the Department of the Interior where it will be used for construction and repair needs at military cemeteries! AMAZING! It’s so great to have a President who loves our brave military men and women so much! Oh, and where’s the media coverage of this? Oh that’s right, they don’t cover anything good that the President does.

So the claim that Trump donated his entire $400,000 annual salary for rebuilding military cemeteries actually comes from online rumors posted in 2017. This means the vast majority of claims made in July and August 2018 are false on this basis alone, since they stated that Trump's donation had happened "today."

However, the claim was as false in 2017 as it was in 2018. As we outlined at the beginning of this article, President Trump distributed his 2017 salary in four separate chunks, to four separate projects, none of which involved military cemeteries. The White House had already announced two of those donations by 26 July 2017, so the viral rumor was demonstrably false even as it first emerged online, twelve months before Mark Simone and Charlie Kirk's viral tweets.

The 2017 rumor, which was the source of Simone's tweet, claimed that the 2017 White House Office Personnel report had described President Trump's intention to donate his whole salary for repairs on military cemeteries. That official report, which can be viewed here, did not mention the president's salary, his donations from that salary, nor cemeteries of any kind.

The original source of this flurry of inaccurate rumors appears to have been a 2 July 2017 article in Forbes magazine, about that year's White House Office Personnel report. The rumor which spread online later that summer plagiarized whole sections of the article, indicating that the Forbes piece provided a template for subsequent distortions and falsehoods -- particularly the section that read as follows:

While on the campaign trail, Donald Trump vowed to forego his paycheck. However, Article II of the United States Constitution mandates a presidential salary. In the first quarter, President Trump donated his pay to the Dept. of Interior for construction and repair needs at military cemeteries.

The president did donate his first-quarter 2017 salary to the Department of the Interior, but not for the reconstruction of military cemeteries. This inaccuracy was then compounded in the subsequent online rumor, which took Forbes' accurate description of the donation as being "in the first quarter," and simply replaced it with "all $400,000" (i.e., the entire yearly salary).

According to a Department of the Interior press release, President Trump's $78,333 donation formed part of a larger $263,545 fund which was used by the National Park Service to make repairs at Antietam National Battlefield in Maryland, site of the Civil War Battle of Antietam (or the Battle of Sharpsburg, as it was commonly known in the South).

A press release described the project in detail:

The donation will restore the historic Newcomer House on the Antietam battlefield, and will underwrite the replacement of 5,000 linear feet of deteriorated rail fencing along the Hagerstown Turnpike where some of the most intense fighting of the battle occurred.

There is a cemetery at Antietam National Battlefield, but President Trump's donation had nothing to do with it.

The claim that President Donald Trump decided either in 2017 or 2018 to donate his entire $400,000 salary to the reconstruction of military cemeteries, and that a blinkered, biased news media refused to report this, is false.

Each of President Trump's actual salary donations (executed in quarterly disbursements, not once a year) has been reported by major news media, including some of the nation's biggest and most widely-read news outlets.

The news media has not reported on the president's donation of his entire $400,000 annual salary for the reconstruction of military cemeteries due to the plainest reason of all: because it hasn't happened.

The Right Scoop.   "Trump Just Donated His Presidential Salary to the Rebuilding of Military Cemeteries."     1 August 2018.

Updated to include information on President Trump's most recent salary donation.