Did President Trump Break Protocol in His Meeting with Queen Elizabeth?

Criticism of the U.S. president's actions in the U.K. was largely based on cherry-picked images and misinformation about royal etiquette. 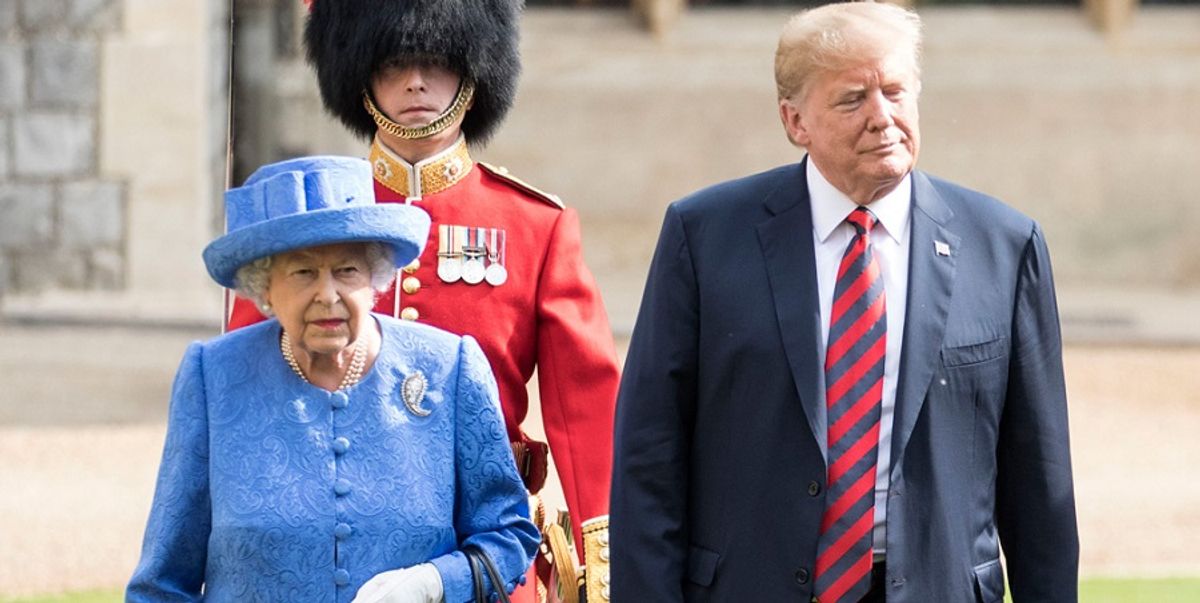 Claim:
Donald Trump broke royal protocol by arriving late to meet Queen Elizabeth, failing to bow, and walking in front of her.
Rating:

President Donald Trump's short, controversial visit to the UK in July 2018 was met with large-scale protests, political intrigue, and intense scrutiny over the U.S. president's behavior and demeanor -- particularly in his meeting with Queen Elizabeth.

Multiple news reports from both sides of the Atlantic claimed that Trump had broken protocol by arriving late to meet the British monarch and by walking in front of her, and that both the president and First Lady Melania Trump had defied protocol by not bowing or curtseying before Queen Elizabeth.

The U.S. president did not definitively breach royal etiquette (which is not as strict as many observers have suggested), although his 5:00 PM arrival at Windsor Castle for a 5:00 PM appointment with The Queen could have been regarded as an informal breach of protocol or tradition.

As the British Royal Family's web site states, "There are no obligatory codes of behaviour when meeting The Queen or a member of the Royal Family, but many people wish to observe the traditional forms."

These "traditional forms" include bowing and curtseying (although simply shaking hands is acceptable), and addressing the Queen as "Your Majesty" on first greeting and as "Ma'am" subsequently. That is the extent of the etiquette listed on the Royal Family's own web site.

Walking with the Queen

The U.K. tabloid newspaper the Daily Express reported that Trump had 'broken Royal protocol' by 'blocking out' Elizabeth while accompanying her for an inspection of the Royal Guard at Windsor Castle on 13 July 2018. It is considered rude to turn one's back to the Queen, but this "rule" does not appear on the Royal Family's list of "traditional forms" when greeting a royal.

In CNN's footage of the incident, Trump could be seen walking side by side with the Queen towards rows of Royal Guards. Just as the inspection was about to begin, the Queen appeared to urge President Trump to go ahead of her: President Trump walked ahead for a few paces, momentarily blocking the Queen from the view of some news cameras, giving rise to cherry-picked snapshots widely shared on social media and as evidence supporting criticism of Trump's actions: Trump then conspicuously stopped walking while he stood and waited for Queen Elizabeth to catch up. The pair then resumed walking side-by-side: Trump, who appeared to have been urged by the Queen to walk ahead of her, spent a total of six seconds in front of the monarch before the two began walking side-by-side again, as can be seen in the footage below:

As the Royal Family's own web site sets out, it is traditional for non-royals to bow or curtsey (for men and women, respectively) when meeting the Queen. However, the web site also states "Other people prefer simply to shake hands in the usual way."

Neither the U.S. President nor First Lady bowed nor curtseyed when they first met Queen Elizabeth. Instead, both shook her hand, as this video shows:

Despite widespread social media outcry and criticism in the news media,  shaking hands is a perfectly acceptable way to greet the Queen and is expected among world leaders. Hugo Vickers, an author and biographer of British royals, told the Associated Press that a handshake by the Trumps would be in no way a breach of protocol: "That wouldn’t be required from a head of state or the wife of a head of state."

Some observers also criticized President Trump for allegedly arriving late to his meeting with the Queen at Windsor Castle, or at the very least keeping her waiting for an unduly long period of time. This claim is also dubious.

President Trump was scheduled to arrive at Windsor Castle at 5:00 PM local time on Friday, 13 July. At 4.48pm, Elizabeth emerged into the quadrangle in anticipation of the U.S. president's impending arrival by helicopter. In the BBC's live coverage, it was noted that this move likely came after a signal that the Queen's guest was approaching.

While she waited, Queen Elizabeth appeared to talk to two of her aides while fixing her gloves. The movements she made with her hands and wrists were interpreted by some as "checking her watch," unhappy with having to stand and wait:

Oh dear, she just looked at her watch. The Queen does NOT like tardiness. pic.twitter.com/b0GXBV9oWt

It's possible the Queen was checking the time on her wristwatch, and it's possible she was doing it out of frustration (as opposed to simple curiosity), but there is no clear evidence that this is the case. The video (as opposed to snapshots taken from the video) show that the Queen fixed her gloves during those few seconds, which could just as easily explain her movements and gestures:

In the end, Trump and the First Lady emerged from their car in the quadrangle of Windsor Castle at exactly 5:00 PM, according to CNN's video footage. Their handshakes with Queen Elizabeth took place a few seconds later, at 5:01 PM:

Depending upon how one reckons, the Trumps were either just about exactly on time or late by a few seconds in arriving for their meeting with the Queen. It's also not clear that they were in any way responsible for the time the monarch might have spent in waiting for them. Queen Elizabeth emerged into the quadrangle 12 minutes before the president's scheduled arrival, likely after a cue from a staff member, making it inevitable that she would have had to wait some period of time for the American couple's arrival.

It's also not clear if arriving late (assuming the Trumps did arrive late) would be a formal breach of protocol as opposed to simply discourteous. Some news articles have noted that it is generally considered proper etiquette to arrive before the Queen at a meeting place, but early arrival is not among the "traditional forms" listed on the Royal Family's web site.

When heads of state visit foreign countries, their tightly-packed schedules can sometimes be disrupted by unforeseen circumstances and events. In April 2014, Queen Elizabeth herself, along with her husband the Duke of Edinburgh, arrived 20 minutes late to a meeting with Pope Francis in Rome. Upon meeting the pontiff, she acknowledged their tardiness, explaining "We were having lunch with the president, you see":