Did a Trump Official Move to Change the Poem on the Statue of Liberty?

The sonnet on the Statue of Liberty welcomes the "huddled masses." 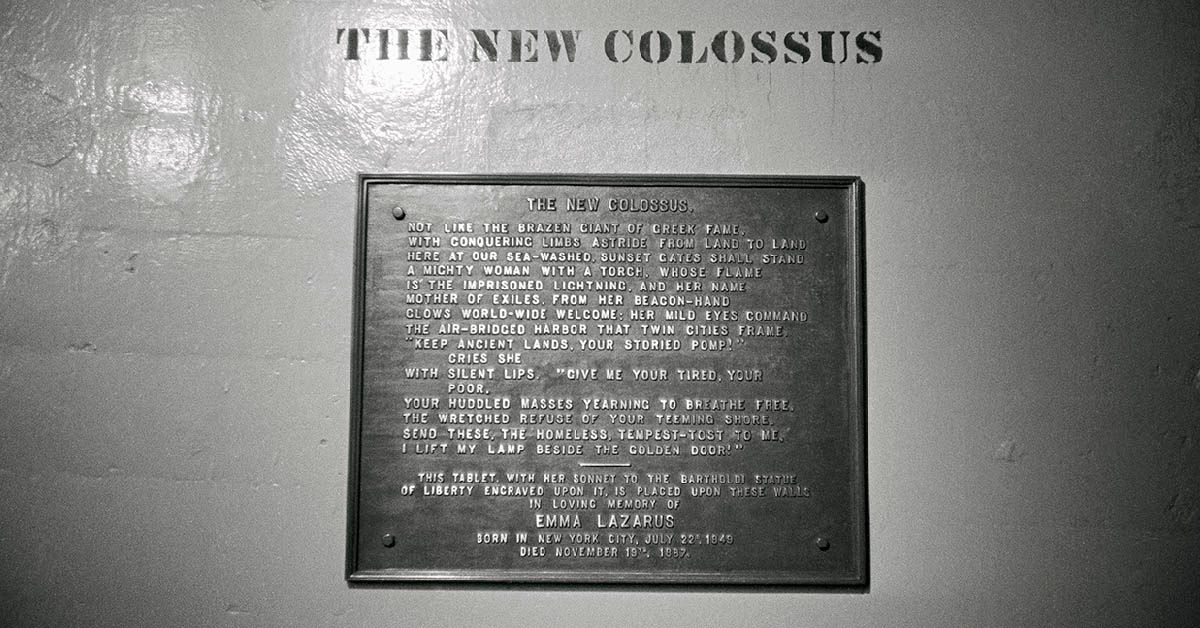 (Original Caption) Poem entitled The New Colossus by Emma Lazarus located on the base of the Statue of Liberty. (Bettmann / Contributor / Getty Images)

Claim:
A Trump administration official moved to change the poem inscribed on the base of the Statue of Liberty in New York.
Rating:

Acting director of U.S. Citizenship and Immigration Services Ken Cuccinelli put his own impromptu spin on the poem inscribed on the base of the Statue of Liberty during an interview with NPR.

The Trump administration hasn't proposed altering or removing the poem welcoming the poor and "huddled masses."

On more than one occasion, members of the Trump administration have expressed disdain for "The New Colossus," the immigrant-welcoming poem inscribed on a plaque embedded on the base of the Statue of Liberty in New York.

It happened most recently on Aug. 13, 2019, during an interview on National Public Radio. Ken Cuccinelli, acting head of U.S. Citizenship and Immigration Services, discussed a new Trump administration rule to penalize legal immigrants who seek public assistance. In the course of the interview, Cuccinelli quoted the famous poem penned by Emma Lazarus, but changed some of the words.

The comment came in response to a question from NPR's Rachel Martin, who asked Cuccinelli if he would agree that the poem etched on the Statue of Liberty, "'give me your tired, your poor,' are also part of the American ethos?" To this Cuccinelli responded, "They certainly are, 'give me your tired and your poor who can stand on their own two feet and who will not become a public charge,'" Cuccinelli responded, ad-libbing the end of the sentence.

The actual quote reads, "Give me your tired, your poor, your huddled masses yearning to breathe free, the wretched refuse of your teeming shore. Send these, the homeless, tempest-tost to me, I lift my lamp beside the golden door!"

Cuccinelli's remark set off public outrage in some circles. He has been discussing a new Trump administration "public-charge" rule that would penalize immigrants seeking American citizenship for using public benefits. Critics pointed to the statement as a betrayal of, as Martin stated, the American ethos of welcoming not just immigrants but as the 19th-century poem states, "your tired, your poor, your huddled masses yearning to breathe free."

Backlash from Cuccinelli's statement resulted in a number of headlines reporting the Trump administration was rewriting or revising the Statue of Liberty poem, causing confusion among some readers who asked whether the plaque would be altered.

Although Cuccinelli put his personal spin on the poem, written in 1883 and engraved on a bronze plate secured to the base of Lady Liberty in 1903, he did not state that anyone in the Trump administration had the intention of removing or altering the words on it. In fact during a press briefing about the public-charge rule, given by Cuccinelli on Aug. 12, a reporter specifically asked Cuccinelli whether the words on the Statue of Liberty should be changed or the plaque be taken down.

"Well I'm certainly not prepared to take anything down off the Statue of Liberty," Cuccinelli responded. "We have a long history of being one of the most welcoming in the world on a lot of bases, whether you be an asylee, whether you be coming here to join your family or immigrating yourself. ... I do not think by any means, we're ready to take anything off the Statue of Liberty."

Although Cuccinelli made an impromptu comment, adding words to an existing poem that don't belong to it, he was not suggesting actually revising the words inscribed on the Statue of Liberty or removing them, so we rate the truth of this claim "Mixture." Despite taking a hard line on immigration that critics say run counter to American ideals, the Trump administration has not proposed altering the Statue of Liberty.

Cuccinelli's take on the poem was later challenged in an op-ed in The New York Times, authored by Esther Schor, a professor of Jewish Studies at Princeton. Lazarus, the poem's author, was known for helping Jewish refugees from Eastern Europe. Schor wrote, "Ms. Lazarus not only insisted that American Jews come to the aid of Jewish refugees; two years later, she wrote 'The New Colossus' to argue that aiding the poor and oppressed of all lands was the mission of all Americans, the mission of America itself."

Schor, Esther. "What the Trump Administration Gets Wrong About the Statue of Liberty."   The New York Times. 14 August 2019.