Did the NFL Give Donald Trump a Lifetime Ban After a Disastrous Lawsuit?

A viral meme got some facts right about an infamous 1980s lawsuit involving Donald Trump's football team but missed the mark with others. 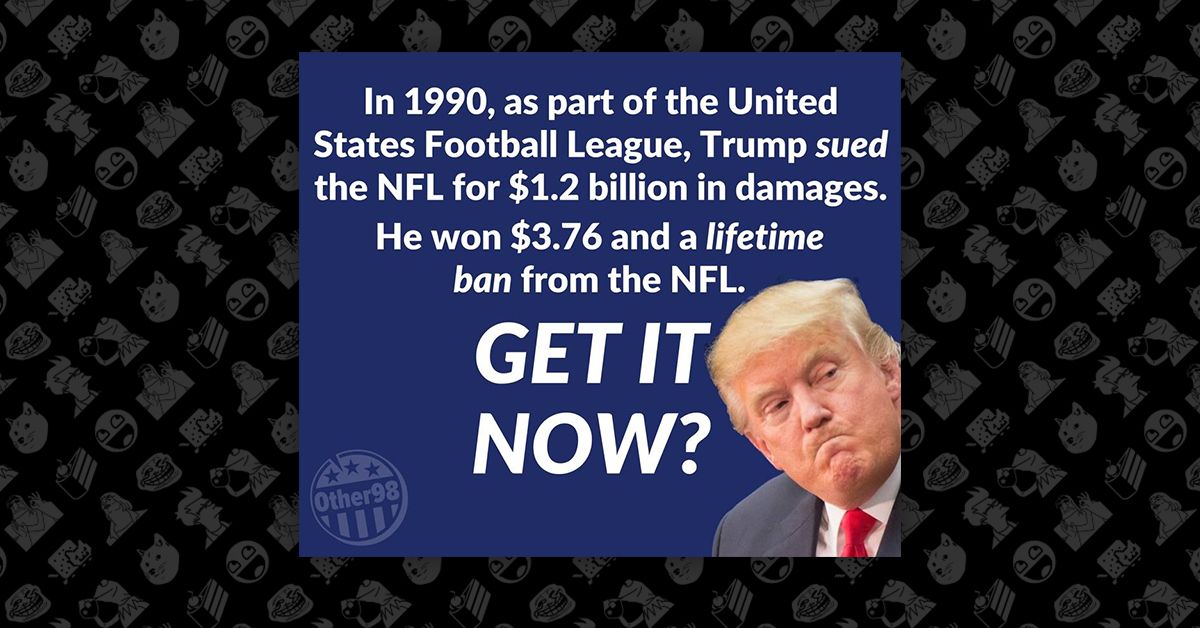 Claim:
The NFL gave Donald Trump a "lifetime ban" after he was involved in a disastrous lawsuit against the league.
Rating:

As owner of the New Jersey Generals USFL team in the 1980s, Trump was a driving force behind an antitrust lawsuit against the NFL that was successful but won only $3.76 in damages, effectively putting an end to the upstart league.

Trump did not sue the NFL in a personal capacity, nor did the NFL levy a "lifetime ban" against him for his part in the lawsuit.

In the midst of an ongoing public debate about national anthem protests by NFL players that grew to involve even President Donald Trump in September 2017, Internet users were reminded of an infamous 1980s lawsuit involving the now-defunct United States Football League and the NFL in which Trump had played a key role: The United States Football League (USFL) was a short-lived professional football league that played in the spring and summer of 1983, 1984 and 1985. In 1983, real estate mogul Donald Trump bought the USFL's New Jersey Generals team and from then onwards gained increasing prominence and influence among the league's owners, according to several accounts given in the 2009 ESPN documentary "Small Potatoes: Who Killed the USFL?"

Trump repeatedly called for the upstart league to go head-to-head with the NFL by switching its playing season to the fall and winter, once saying: "My attitude has always been [that] the spring was a wasteland, and I came into this league on the basis [of], and predicated on the fact, that I thought the league would move to the fall."

On this point, Trump faced opposition from others within the USFL, in particular John Bassett, the influential owner of the Tampa Bay Bandits. Ultimately, Trump's view won out, and in 1984 the USFL announced that their 1986 season would begin in the fall.

Trump later described himself as the "leading catalyst" for the decision to move to the USFL season to the fall, although in 1987 the USFL's former director of communications, Jim Byrne, presented an account of the spring/fall schism within the league that emphasized the role of Harry Usher, who had become USFL commissioner in 1985.

However, the planned change in seasons did not work out so well in practice, as the USFL faced severe difficulties in obtaining contracts with major television networks (a key source of revenue), among other problems, which brings us to the lawsuit now so frequently connected with Donald Trump.

The source provided for the meme displayed above was a 25 September 2017 Business Insider article that extensively quoted business journalist Joe Nocera, who offered his recollections about the USFL's scheduling problems and their response to them:

At the beginning of the third season [of the United States Football, the league actually decided that for the fourth season they would go to the fall. The networks were furious, the players knew it wasn’t going to work out, the losses really started to mount, the owners were getting incredibly upset. Trump had a solution, however. His solution was, “We’re gonna sue. We’re going to sue the NFL for being monopolists.”

The large part of the argument was, “We can’t get a network contract because they have all three networks locked up so they must be a monopolist.” The jury did, in fact, rule that the NFL was a monopolist that had harmed the USFL. They had asked for $1.2 billion in damages, and the jury said, “We’re going to give you $1.” And in antitrust cases that’s tripled so that’s $3. Add interest [and] that’s $3.76.

According to a 30 July 1986 report from the New York Times, the jury ruled that the NFL had violated Section 2 of the Sherman Act by retaining a monopoly power "to control prices or exclude competition" in the country's professional football market. But jurors awarded such low damages because Judge Peter Leisure had told them they should do so if they were not able to say definitively that the losses suffered by the USFL were caused by the NFL's control of the market, as opposed to the USFL's own poor management.

Trump hailed the verdict as a "great moral victory," and the USFL launched a series of motions and appeals that culminated in 1990. But on the playing field, the 1986 USFL was postponed just days after the trial concluded, and the USFL never staged another game.

Donald Trump was not a plaintiff in the USFL lawsuit in a personal capacity, but the team he owned, the New Jersey Generals, was one of the plaintiffs. Moreover, Trump's long-time personal lawyer, Roy Cohn, was one of the attorneys for the USFL, and both Trump and Cohn gave press conferences and interviews about the case, criticizing the NFL and supporting the USFL's arguments. And Trump himself testified during the trial.

So while Donald Trump may not have been a plaintiff in the ultimately disastrous lawsuit against the NFL, a team he owned was, and it would be entirely reasonable to say he was a driving force behind the litigation.

The final component of the meme, that the NFL levied a "lifetime ban" against Donald Trump for his role in the USFL lawsuit, is difficult to rate. Presumably it refers to Trump's efforts to obtain an NFL franchise, something then-commissioner Pete Rozelle stated he would never allow, according to Leslie Schupak, senior managing partner at KCSA Worldwide, the USFL's marketing and public relations firm:

[A] meeting [between Trump and Rozelle], held in March 1984, concerned Trump's desire to possess an NFL franchise. Although he owned the Generals and spoke publicly of his love for the USFL, Trump (according to many people who knew him) anxiously wanted to ditch the upstart for the money and fame of the bigger league. Hence, said Schupak, Trump invited Rozelle (a man he knew casually through scattered social encounters) to meet, and had Schupak -- with whom he had bonded -- tag along.

Schupak remembered it well. "They arrive, and even before Pete can stop talking on a casual basis, Donald starts his diatribe on how great he (Trump) would be for the NFL, and what it would mean to the NFL to have him as a franchise owner," he said. "Donald is going on in his typical style, telling Pete Rozelle what he believes in, why he would be wonderful. It was typical Donald, in that Rozelle couldn't get a word in."

According to Schupak, Rozelle seemed to be under the impression Trump extended the invite to discuss relations between the two leagues. When he realized what Trump was after, he turned cold and blunt. "Mr. Trump," Rozelle told him, according to Schupak, "as long as I or any of my heirs are involved in the NFL, you will never be a franchise owner in the league."

The meeting ended shortly thereafter. Not surprisingly, Trump remembered the meeting very differently, in testimony he gave in 1984 during the USFL's antitrust case against the NFL. Trump told jurors that Rozelle promised him an NFL franchise.

He did not get one. Donald Trump was never a franchise owner in the NFL.

So, this aspect boils down to a second-hand account (which was contradicted by one of the participants) of former NFL commissioner Pete Rozelle's supposedly telling Trump in private that he would never allow Trump to own an NFL franchise. However, any such personal feelings that Rozelle (who died in 1996) may have held along those lines is not codified or enforceable as an NFL rule today. Moreover, Rozelle reportedly formed his opinion of Trump's undesirability as an owner back in 1984, two years prior to the USFL's filing their anti-trust lawsuit against the NFL, so that litigation could not have been the motivation behind Rozelle's purported "lifetime ban" of Trump from the NFL.

On the whole, there are elements of this meme that are accurate: the existence of the lawsuit, the amount of damages, the involvement of Donald Trump. But the meme also fails to make it clear that Trump did not sue the NFL in a personal capacity, and the claim about the NFL's giving the future president a "lifetime ban" is questionable.