Is This an Authentic Photograph of President Trump?

A photograph of Trump, posted online by a Republican congressman, prompted much speculation about the president's skincare regimen. 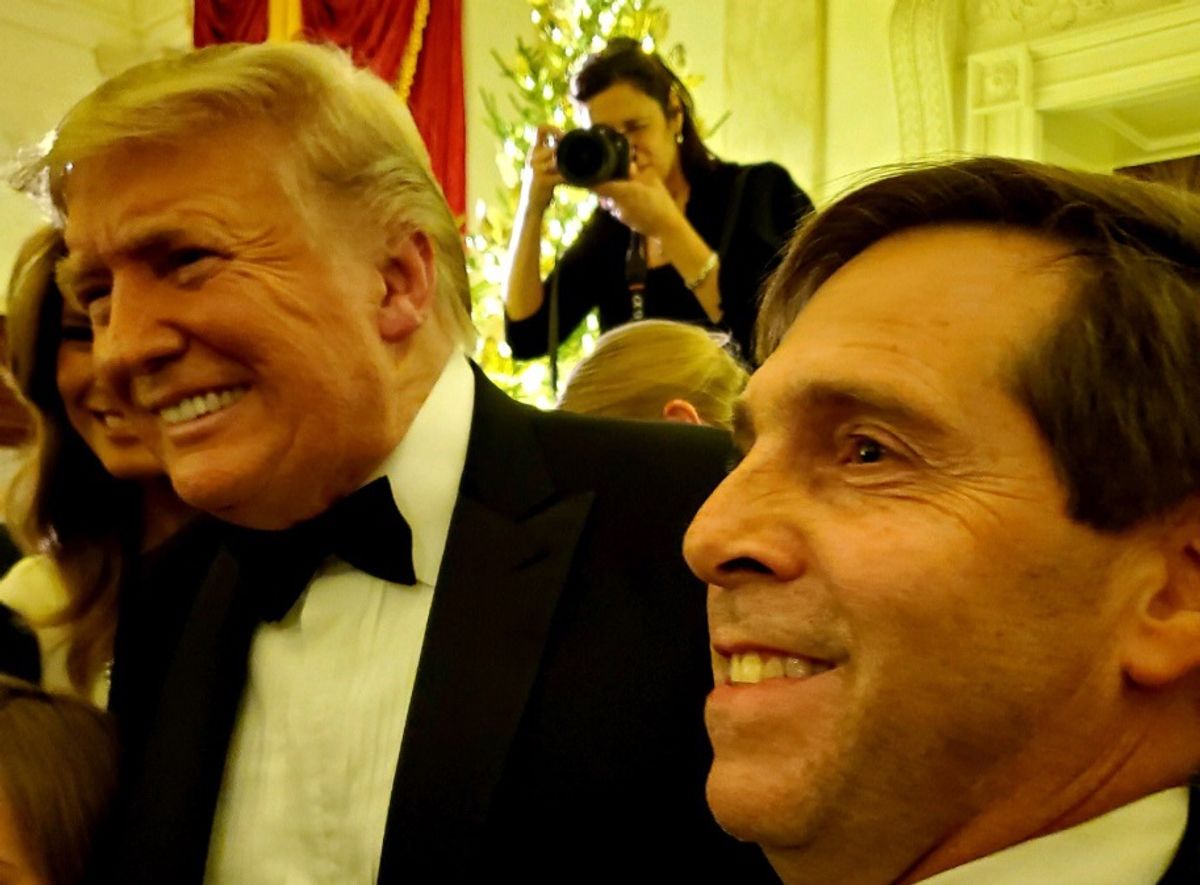 In December 2019, we received multiple inquiries from readers about a widely-shared photograph of U.S. President Donald Trump which appeared to show him with a somewhat unusual color gradient along the side of his face, an artifact some observers attributed to the uneven application of spray tan or makeup.

On Dec. 21, for example, the left-leaning website The Political Flare published an article about the picture under the headline "Trump Had a Severe Makeup Mishap at [White House] Christmas Party and He's Now and Absolute Laughing Stock":

Trump may ethnically identify as 'white,' but his skin is categorically and scathingly portrayed as orange ... The official White House position on the issue, a 'senior administration official' told the New York Times on the condition of anonymity, is that Trump’s tawny tincture is the result of 'good genes' ... But at a recent Christmas party, Trump showed an obvious makeup line that answered all questions…the dude is wearing makeup, and Twitter had an absolute field day ...

The left-leaning Democratic Underground website followed suit, republishing The Political Flare's article in a blog post using the headline "Well, So Much for the [Bullshit] White House 'Good Genes' Theory."

On Dec. 21, Jon Cooper, chairman of the Democratic Coalition political action committee, posted a cropped version of the image which showed only Trump's face:

The man shown to Trump's left in the photograph was Rep. Chuck Fleischmann, R-Tenn. On the evening of Dec. 12, Fleischmann (or a member of his team) posted the photograph to both his Twitter and Facebook accounts: The photograph appears to have been snapped at the White House Congressional Ball, which took place on the evening of Dec. 12, as we could find no earlier instance of the photograph other than those posted online by Fleischmann on that date. The image appears to be authentic, since Fleischmann is a strong supporter of Trump's, and it seems unlikely he would arrange for the image to be digitally altered before publication so as to create the false appearance of a non-existent skin tone demarcation on the president's face.

However, we cannot rule out the possibility, however unlikely, that either Fleischmann or a member of his staff -- for whatever reason -- arranged for the photograph to be digitally manipulated, or that the photograph was not originally posted by the Congressman, that he or his staff found the image posted elsewhere after it was edited by a third party, and that they subsequently reposted it. The original post could have been deleted, leaving the impression that Fleischmann was the original poster.

Since we can't rule out the possibility that Fleischmann or his team either digitally altered the photograph or reposted an already-altered version, we are issuing a verdict of "Unproven" regarding the authenticity of the image.

It's worth noting that any possible digital alteration need not have been malicious. Various smartphones and apps feature editing software that allows users to apply filters or color schemes to photographs, modifications which can artificially change the appearance of images.

It's also possible that the photograph was not edited but that the angle from which it was taken, perhaps in combination with the lighting in that part of the room, contributed to exaggerating a color gradient on Trump's face which was, in reality, much more subtle. Several other photographs of the president from that same event do not exhibit him with the same stark demarcation in skin tone, although they do show the opposite side of his face: We made repeated attempts to seek clarification from Fleischmann's spokesperson, but unfortunately we did not receive a response in time for publication. If we receive information which clarifies the photograph's origins and rules out the possibility that the Congressman's staff either digitally altered the photograph or posted an already-altered image, we will update this fact check accordingly.