The world-famous London museum had some fun at the expense of the outgoing U.S. president in November 2020. 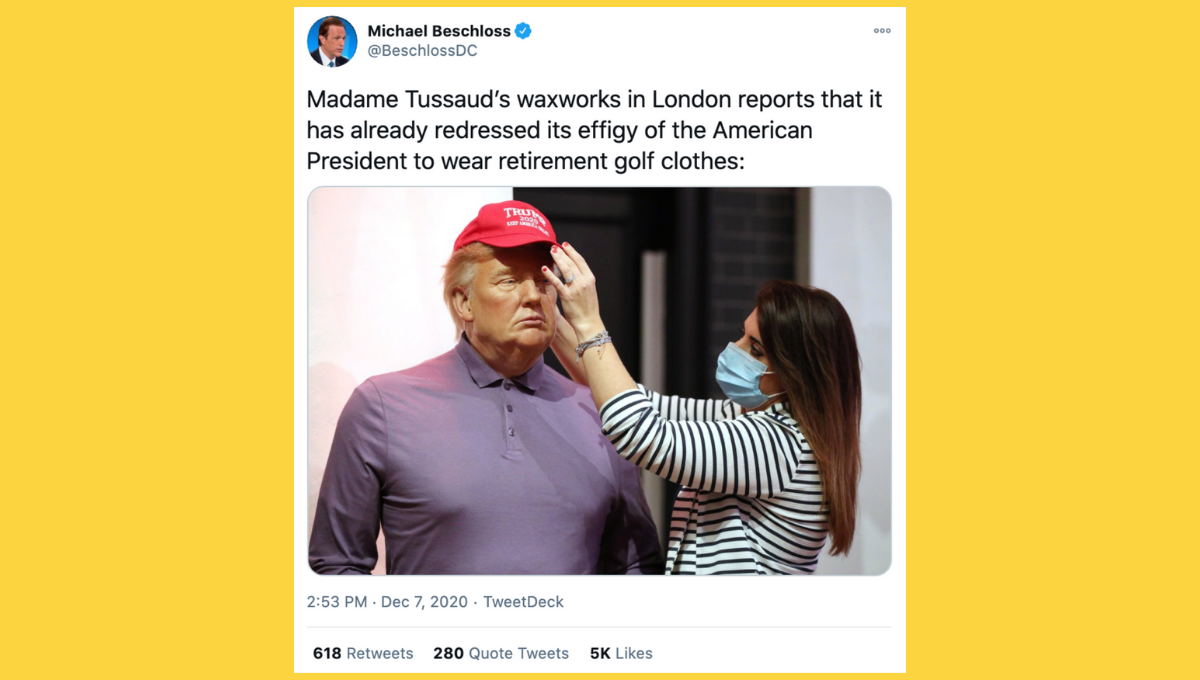 Claim:
In November 2020, Madame Tussauds in London replaced the business suit on its effigy of Donald Trump with a golfing outfit.
Rating:

In late 2020, after President-elect Joe Biden's projected victory in the Nov. 3 U.S. general election, social media posts and news reports claimed that Madame Tussauds, the world-famous wax museum in London, had changed the clothes on its effigy of outgoing President Donald Trump from a business suit to golf attire.

On Dec. 7, U.S. presidential historian Michael Beschloss tweeted a photograph of what appeared to be the replacement of the clothing in progress, along with the following caption:

"Madame Tussaud’s waxworks in London reports that it has already redressed its effigy of the American President to wear retirement golf clothes." Articles to the same effect were published by the Huffington Post and New York Daily News, among others.

Those descriptions were accurate. On Nov. 7, 2020 — notably the day on which all major news outlets declared Biden the winner of Pennsylvania's 25 electoral college votes, and thereby the president-elect — Madame Tussauds in London changed Trump's attire, reflecting what the museum said might be his outfit of choice after he leaves the presidency in January 2020:

"His campaign may not have been a hole in one, but Donald Trump is now on course to dedicate more of his time to his favourite sport as Madame Tussauds London re-dresses his figure in golfing attire to reflect his potential 2021 wardrobe."

In October 2020, just a few days before the U.S. presidential election, Madame Tussauds in Berlin took the pre-emptive step of symbolically moving Trump's statue into a dumpster.