Critics of the president seized on two supposed gaffes in October 2019. But what did Trump actually say? 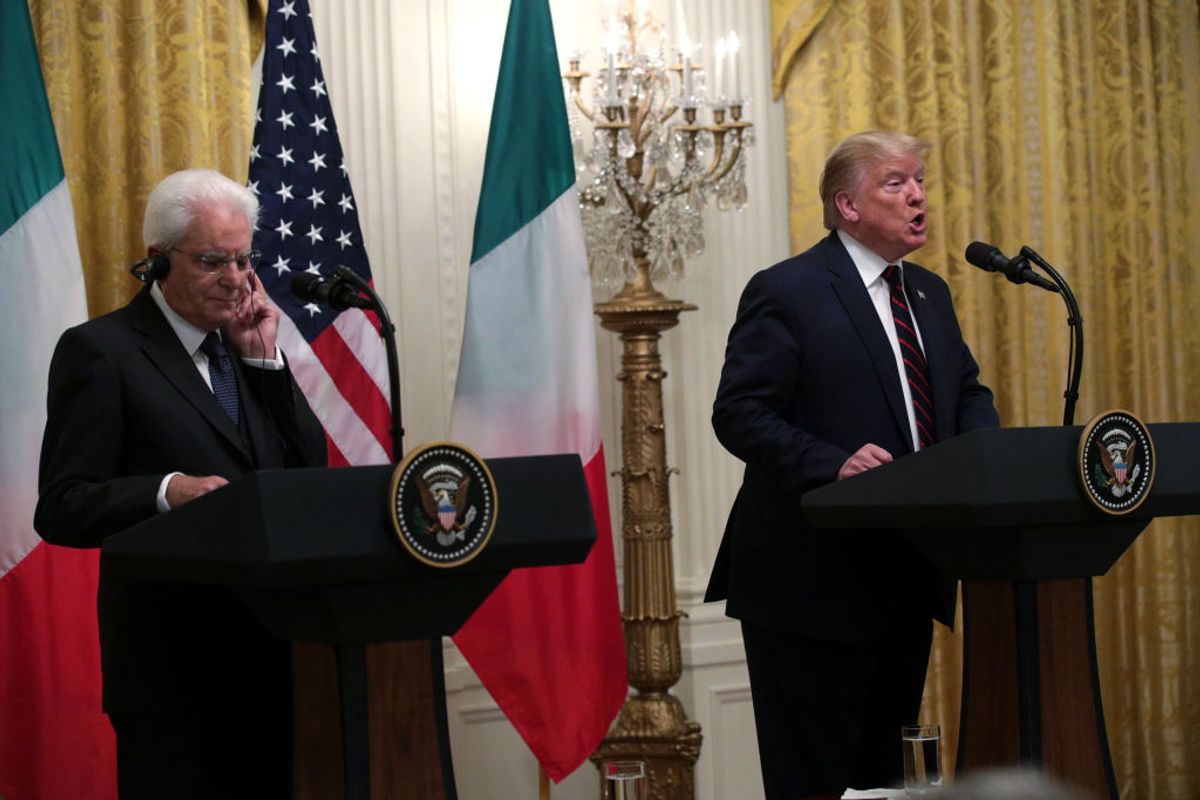 Claim:
In October 2019, U.S. President Donald Trump called Italy's president 'Mozzarella' and claimed the U.S. and Italy had been allies for thousands of years.
Rating:

In October 2019, U.S. President Donald Trump's public appearances with his Italian counterpart, Sergio Mattarella, gave rise to a veritable explosion of viral claims that Trump had butchered his guest's name, referring to him as "President Mozzarella." Widely shared memes also claimed that Trump had said the United States and Italy had been allies since the era of ancient Rome.

The look of the White House Italian translator as Trump says President Mozzarella for the Italian President and says U.S. and Italy have been allies since Ancient Rome. Hot fucking damn pic.twitter.com/ecrIaRFvOI

That #trumppresser was batshit crazy.
* Trump was slurring his words a lot
* He made the claim that we have been allies with Italy since Ancient Rome.
* He bashed NATO while praising Putin.
* He called the Italian President "President Mozzarella" on multiple occasions.

I don’t know whether to laugh or cry at this point. #trumppresser

Notably absent from the many social media posts that expressed a mixture of glee and horror at Trump's supposed "Mozzarella" gaffe was any video footage. The reason for that absence was that the president never actually referred to his Italian counterpart as "Mozzarella."

Trump and Mattarella held three public events together on Oct. 16: They spoke to the press before their bilateral meeting at the Oval Office; held a press conference; and spoke at a reception in the evening. Video footage is available of all three events.

We watched those three events in full and found no instance in which Trump referred to Mattarella as "President Mozzarella." By contrast, Trump uttered the Italian president's last name correctly on four occasions:

Furthermore, Trump never actually claimed that the United States and Italy had been allies since the era of ancient Rome, something that would clearly be wrong because the U.S. was only founded as an independent nation in 1776, and Italy was only unified in the 19th century, becoming a republic in the 1940s.

What Trump actually said, in his opening remarks during the press conference, was as follows:

"The United States and Italy are bound together by a shared cultural and political heritage dating back thousands of years, to ancient Rome ..."

The phrase "dating back thousands of years" evidently caused many commentators to misunderstand the meaning of Trump's remarks. But it's the heritage that goes back that far, not the binding of the two nations.

The influence of the Roman Republic on the formation and principles of the American Republic is well-documented, and Trump's point was historically sound.