Did Trump Inherit a 'Depleted' Military From Obama?

U.S. President Donald Trump has repeatedly exaggerated the "depleted" state of the military when he took office. 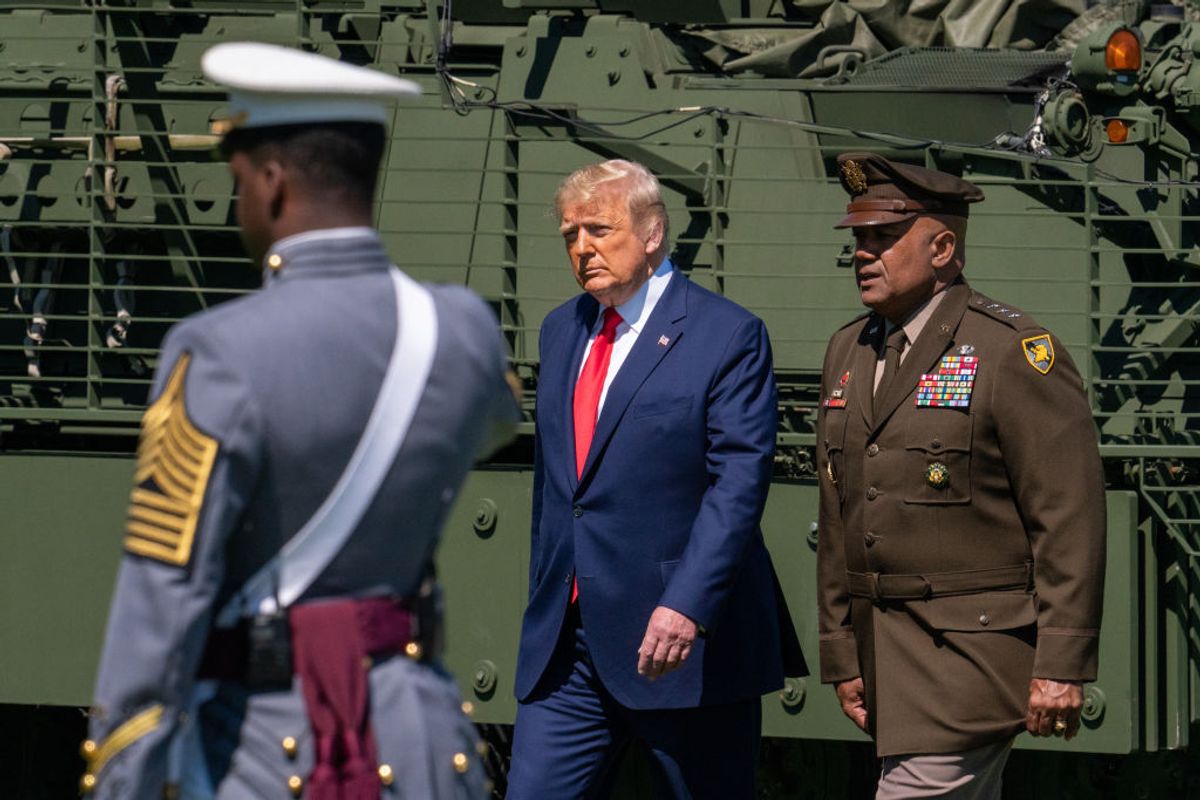 The U.S. national defense budget was slightly reduced during Obama's second term, in large part due to efforts by Congress to limit government spending and the withdrawal of troops from the Middle East.

However, the military wasn't "depleted" under Obama. The military never ran out of ammunition or went "years" without funding, as Trump claimed. The budget for national defense during Obama's term of office totaled nearly $6 trillion.

One claim that has often been repeated by U.S. President Donald Trump is that he rebuilt a military that was "totally depleted" by his predecessor, Barack Obama. Trump's grievance is based on a grain of truth — military spending was reduced during Obama's second term — but Trump's statements on the matter have combined distorted facts with outright falsehoods.

What Trump Has Said

The way Trump tells it, the United States military was in a complete shambles when he took office. Over the years, Trump has made a variety of statements in order to perpetuate this notion.

In one oft-repeated story, Trump illustrated his claim that Obama depleted the military by saying that the armed forces had "no ammunition" when he took office. In October 2019, for instance, Trump said: "When I took over our military, we did not have ammunition."

This is not true. The military did not run out of ammunition during the Obama administration (or during any other administration, as far as we can tell).

This, again, is false. In fact, approximately $600 billion was spent on the military in the year before Trump took office.

President Trump has also mischaracterized his own military spending. On May 22, 2020, during a speech at the "Rolling to Remember Ceremony: Honoring our Nation’s Veterans and POW/MIA," Trump claimed that he spent trillions on equipment:

"We’ve invested the $2.5 trillion in all of the greatest equipment in the world, and it’s all made here, right in the USA.”

This is not true. The $2.5 trillion figure refers to the total Department of Defense (DOD) budget that was passed under Trump -- comparatively speaking, Obama's budget during was about $3.3. trillion during his first term and $2.7 trillion during his second term -- but only of a portion of the DOD budget is spent on equipment. The amount spent on procurement, or the act of obtaining military equipment and supplies, varies from year to year, but it generally made up about 15% of Trump's total military budget.

While Trump has told several falsehoods about how Obama supposedly "totally depleted" the military, there is some general truth to the idea, as overall military spending was reduced during the Obama administration. However, there is a bit more nuance to this issue than is often heard on the campaign trail.

While the military was leaner during the Obama years, the Obama administration still spent trillions on national defense.

Calculating an exact dollar figure for how much the U.S. spends on the military (and what administration is responsible for that spending) is a complicated proposition. The military budget covers a wide range of expenses across five military branches: the Army, Marine Corps, Navy, Air Force, and Space Force. One could also factor in money spent on the Department of Veterans Affairs, on overseas contingency operations, and on other security agencies, such as Homeland Security. Military contracts and budgetary plans also often overlap presidential terms, meaning that spending authorized under one president may end up getting spent under another. Furthermore, each president is faced with different domestic and global threats, which require different approaches and therefore different spending. Lastly, no president has sole discretion over military spending. For instance, sequestration, a provision of the 2011 Budget Control Act that passed congress with bipartisan support, limited the amount that could be spent on the military.

The "green book," an annual budgetary analysis put out by the Office of the Under Secretary of Defense, shows that military spending greatly increased following the Sept. 11, 2001, terrorist attacks during the administration of U.S. President George W. Bush. Spending continued to increase after Obama took office. In 2010, there was a slight decrease in military spending, and that trend continued until 2015. Spending increased again during Obama's final year in office and then continued to increase during Trump's administration.

The following chart from the Center for Strategic and International Studies (CSIS) takes a look at the United States' budget stretching back to the 1980s. The green line at the top of this chart is the United States budget for National Defense.

The military the president inherited from Obama was not depleted or facing a massive readiness crisis, which resulted from massive underfunding in the Obama years. In fact, according to Gen. David Petraeus ,who commanded our troops in both Iraq and Afghanistan and also headed the CIA, and Michael O’Hanlon, there was no readiness crisis and in 2016, the year Trump was elected, the state of our military was “awesome.”

Nor was the defense budget seriously underfunded in the Obama years. If one controls for inflation, in FY2021 dollars Obama spent $3.3 trillion in his first term compared with the $2.9 trillion under Trump. Moreover, while defense spending did decline slightly in Obama’s second term, it still amounted to $2.7 trillion, about $200 million, or 7 percent less, than Trump’s first-term budget. However, this decline was a result of the Budget Control Act or sequestration (BCA,) which was instituted by his current chief of staff, Mark Meadows, who was then a congressman from South Carolina.

What Was the State of the Military When Trump Took Office?

Todd Harrison, the director of Defense Budget Analysis for CSIS, examined Obama's budget for fiscal year 2017, the budget that would be in place when Trump took office, and found that "nearly every measure of force structure — the number of brigades, aircraft, ships and subs, marine battalions, and end strength — [was] smaller than when the [post 9/11] buildup began." However, this "smaller force consumes a budget more than 50 percent larger in real terms than before 9/11. The military is spending more for a smaller force."

Why Was Military Spending Reduced During Obama Administration?

Though it is certainly not accurate to say that the military did not receive any funding during the Obama administration, there was truly a reduction in spending. Two major factors resulted in reduced spending. First, congress placed restrictions on military spending in 2011 in an attempt to reduce the national deficit. And second, the Obama administration started to withdraw troops from Afghanistan and Iraq.

Here's how The New York Times explained the impact of the congressional sequester on military spending:

In 2011, in response to a debt ceiling crisis, lawmakers reached a bipartisan agreement to reduce deficits by at least $2.1 trillion over the next decade. In addition to limits on domestic spending, limits were placed on the Pentagon’s base budget, but not its wartime spending.

Congress increased spending caps by $32 billion in 2013 and $40 billion in 2015, referred to by budget watchers as “partial sequester relief.” In February, the cap was blown off entirely, when Mr. Trump signed a budget deal that raised it by $165 billion over two years. Effectively, that ended the sequester without repealing the original law.

From 2012 to 2017, the Pentagon’s annual budget had decreased as a percent of the economy. But it still hovered around $600 billion — a far cry from “no money” at all.